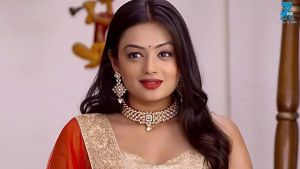 Mahek comes out of her house, she slips and falls on Shaurya who is lying on bed he has placed outside her house, Mahek looks at Shaurya, they share eyelock, o re piya song plays, Mahek is emotional being so close to him. Mahek asks what are you doing here? Shaurya says i am breathing in cholestrol air, it feels nice, Mahek moves away from him and says what are you doing? Mehek 6 May 2019 Monday Update

You cant stay here, Shauray says why not? this is not part of your house, this is public place, i pay tax so i have right on this area too, neighbours agree with him. Mahek says you can try anything but nothing can happen between us so dont embarrass my family sitting on road like this, Shaurya says so allow me in your house, Balwant says leave from here or else i will throw you away, this is not charity house that you can come inside and live, he asks Mohit and Jeevan to throw him away, Jeevan says what are you saying? Mohit says chill grandpa.

Balwant asks neighbours to throw him away. neighbours charges at Shaurya, Shaurya takes off his jacket and shows his biceps, Jeevan gets scared, Balwant says dont scare us with these biceps, i will call police, Shaurya says i willcall commissioner, you talk to him, Balwant gets scared listening commissioner’s name and moves back.

Mahek says i fold my hands and request you to leave, why you are doing all this? Shaurya says because we love each other a lot, i am not asking for a lot, i am just asking for a chance, i know there are problems between us but we can find solution, we dont have problem with each other so why should our love suffer? tell me Mahek?

Mahek says i am going office and you Shaurya, i wont allow you inmy house ever, you will be gone till evening, she starts leaving, Shaurya says try to focus on work if are able to not focus on me, see you in the evening. Mehek 6 May 2019 Monday Update – Zee World

Jeevan comes out of house but all neighbours are taking selfies with Shaurya. Jeevan pushes them away and goes.
Kanta and Mansi bring groceries from store, Shaurya take bags from them and ask them to let him hold it, Kanta stares him, take bags from him and goes in house.

PD sees Shaurya lying outside house and is uncomfortable on hard bed, Pd asks Nehal to give him pillow. Shaurya passes flying kiss to PD, PD waves at him. Balwant comes there and sees them exchanging glances, PD says there are mosquitoes here, i was not waving, come and kill mosquitoes, Shaurya laughs.

Mahek is in her office. Nehal comes there and says you fought with me in morning and now called me to office? Mahek gives her bag and asks her to give it to him, Nehal teases her and says i will give it to my Hj, Mahek says who hj?

Nehal says hone wale jeeju(would be brother in law), Mahek says jeeju my foot, did he do any drama? Nehal says he is celebrity there, PD gave him pillow, mohit gave him water. Mahek says enough, he will leave till evening, give him this food, he wont like home cooked food, Nehal says you modern Juliet, i will take commission for this favor, Mahek asks her to leave, Nehal leaves with food.

Kanta sees Shaurya still sitting outside and ask Nehal to go and make coffee, she goes. Shaurya says thank you Chachi, i needed coffee. Kanta comes to him and sits on his bed, she says enough now, drink coffee and go back home.

Do you even realize how much Mahek can be disrespected by people because of you sitting here, people will gossip about it, i am like your mother, i am pained to see you like this, i know you both love each other, if fate wants you both to meet then you will meet but you should respect Mahek’s decision.

You wont get anything by sitting here, so just leave from here, Shaurya just smiles and looks at her, she asks what are you looking at? he says your eyes, they resemble Mahek a lot and one more thing resembles Mahek, that is being stubborn and now i am part of your family so i have to be stubborn too so i am not going anywhere, Kanta says so keep sitting here.

Shaurya says i wont allow anyone say anything rubbish about my would be wife, i havent made these biceps for nothing, Kanta says dont act like hero. Mahek comes there and sees him still outside her house, he says hi, she glares him.

Mahek sees Shaureya sleeping outside. He feels cold. He lits fire near his bed. Mahek looks at him. .. says it is so cold ask him to come in. Mahek says did I ask him to to stay out? Mahek calls .. and says aunty can you ask Shaureya to come to you.

He is sleeping in cold, he would get ill. She says he loved you he will do it right and it is between you two. And I am glad to hear that you care for him. Mahek comes out.

Shaureya says gave up? You are here to take me in. Mahek says no. It’s cold. He throws away his quilt and says no it isn’t. She says why are you being stubborn like kids? I feel like slapping you.

He puts her hand on his face and says slap me. she says leave my hand. She pinches him. He says were you a cat before this life? Mahek goes from there. Shaureya says mahek, in next 12 hours you will take my hand and take me inside the house.

Mahek leaves. Shaureya says I just asked for a simple love story. Wedding, romance, honeymoon, kids but this Mahek wants to sacrifice like Romeo. Mahek comes out again. He says I knew you can’t see me. I thought it would take 12 hours and you melted in 12 minutes.

Mahek says hurry up return me the flask. The song ‘sanam re’ plays in background. Mahek takes the flask and goes back in. He wears the gloves and cape. Mahek peeks out. He says I have become a monkey now. He wraps the quilt. Mahek locks the door.

Next morning, Vaitlana says on call don’t call from jail. Let me handle this mater.
She says to Khanna I want to talk to you. He says what you want now? A gym?
Vaitlana says I think this house doesn’t remember that Sanjay is in jail. Khanna says what happened? Vaitlana says Sanjay is not well. But he has to be sarcastic in everything.

Sameer says can he be house arrested? Vaitlana says you stay home, you even remember when you went office last time. Khanna says you will get me stuck. Why don’t you ask your son who has been under grounded for a couple of days.

Mahek wakes up with alarm and says I am late. SHe comes out and says good morning but PD isn’t there. She says where is everyone?

She sees media outside covering that shaureya has been sitting outside this house since last night. She says I am sure shaureya has done this drama. Shaureya sneezes and the media covers him. Reporter says have you been outside like this for any of your ex girl friends? He says no I never found anyone like her before.

Jeevan says don’t be stubborn like this. Balwan says you will fall ill. We will take you to doctor and then home. He says no no I am fine. Reporter says how long do you plan on staying here? Shaureya winks at Mahek. She leaves in anger.

Vaitlana says on call i have talked to your jeja ji you will be out in a few days. And that Shaureya is sitting outside Mahek’s house like a romeo. He doesn’t know I know everything. The day he gets to know who back stabbed her he would be finished. Just come out of jail. Mehek 6 May 2019 Monday Update – Zee World

They bring Shaureya in. Tamatar lala comes near Balwan he gets scared. Pd says don’t worry it won’t eat you up. Shaureya says thank you for brinigng me in to PD.