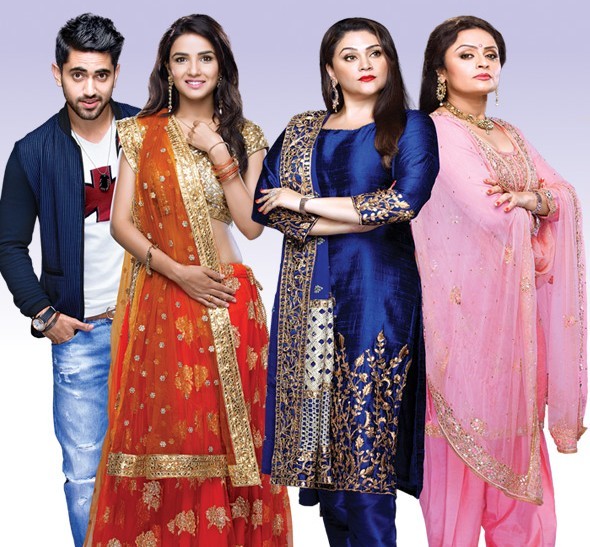 Twinkle finds out that Raminder is actually her father and she’s is still under the impression that Kunj wants a divorce.

Friday 2 August 201 – Episode 43
Leela has an altercation with Anita right outside the house. Twinkle devises a plan to expose Yuvraj once and for all, little does she know that Anita already has a plan of her own to humiliate her. Whose plan will be successful first?

Saturday 3 August 2019 – Episode 44
Kunj still isn’t convinced that Yuvraj is acting and now, Leela is also in disbelief. Cherry tries his best to get close to Twinkle and after being rejected, he resorts to other means to get her alone.

Sunday 4 August 2019 – Episode 45
Cherry pays a few men to take the cupboard containing Twinkle to a farmhouse. Yuvraj reveals that he is only acting mentally ill. Bebe decides to send Yuvraj to a mental asylum after witnessing how he attacked Twinkle and Cherry.

Monday 5 August 2019 – Episode 46
Twinkle is left shocked and confused after Yuvraj agrees to go to the mental asylum. Yuvraj somehow makes everyone believe that Twinkle is abusing him. Even though Kunj is mad at Twinkle, he still arranges a surprise party for her.

Tuesday 6 August 2019 – Episode 47
Twinkle works on a plan to expose Yuvraj by targeting him emotionally. Bebe makes an announcement that leaves everyone speechless. Kunj gets arrested and it’s up to Twinkle to bail him out. Can Twinkle prove Kunj is innocent?

Wednesday 7 August 2019 – Episode 48
Twinkle, with Chinky’s help, saves both Bebe and Kunj from getting assassinated. Twinkle tells Bebe all about her past with Yuvraj and she manages to get Bebe on her side.

Thursday 8 August 2019 – Episode 49
Cherry passes rude comments about Twinkle and it causes Yuvraj to snap. Anita somehow gets Twinkle to leave the house. Yuvraj calls Twinkle to tell her that he is going to kill Kunj at the party. Will Twinkle be able to save her husband?

Friday 9 August 2019 – Episode 50
Yuvraj reveals to Kunj and Twinkle that he poisoned Kunj. Kunj figures out a way to get Yuvraj to come out of hiding. Yuvraj turns the tables on Twinkle as he kidnaps Bebe, Leela, Anand, Kunj and Raman.
Saturday 10 August 2019 – Episode 51
Kunj wakes up and manages to escape with the rest of the family. Kunj gets a call that Twinkle was spotted in Mumbai. The race is on to stop Yuvraj from marrying Twinkle. Can Kunj stop this from happening or will Yuvraj make Twinkle his?

Sunday 11 August 2019 – Episode 52
Yuvraj, with the help of his mother, escapes the country. Kunj makes a decision to study further and Twinkle supports his decision. With Yuvraj gone, Anita and Cherry join hands to fight against Kunj and Twinkle.

Monday 12 August 2019 – Episode 53
A strange and unknown man saves Leela from getting bumped at the market, the question is, who is he? Cherry and Anita organize a very venomous snake with the intention of eliminating Twinkle and Kunj.

Tuesday 13 August 2019 – Episode 54
Leela tries her utmost best to hide the truth about Twinkle’s father from her. Anita sees the shoes of Leela’s husband and she immediately tries to use this information to her own advantage.

Wednesday 14 August 2019 – Episode 55
The tables turn on Anita once again. Kunj somehow learns who Raminder really is. Twinkle has a silly idea of getting her mother married again, not knowing her real dad is still alive. How will she react when she finds out?

Thursday 15 August 2019 – Episode 56
Raminder approaches Kunj and asks him for help to get his family back. Meanwhile, Twinkle is on the lookout for a new partner for Leela. Anita and Cherry hear about Twinkle’s plan and they decide to join in on the fun.

Friday 16 August 2019 – Episode 57
Anita looks for evidence that connects Leela to Raminder. Kunj helps Maya in making the toughest decisions of her life. Leela confesses in front of Kunj that she still loves her husband.

Saturday 17 August 2019 – Episode 58
Kunj invites his college friends over to enact a fake play to try and bring Raminder and Twinkle together. Twinkle finds Maya’s divorce letters and immediately assumes that Kunj wants to leave her.

Sunday 18 August 2019 – Episode 59
Twinkle is still under the impression that Kunj wants a divorce. Kunj is confused about Twinkle’s recent change in behaviour. Anita and Cherry formulate a plan to eavesdrop on Leela and Raminder’s conversation. Will their plan succeed?

Twinkle decides to leave Kunj’s house. Anita and Cherry somehow figure out that Raminder is Twinkle’s actual father. Raminder starts to get very impatient about telling Twinkle the truth. How much longer can he keep it a secret?

Tuesday 20 August 2019 – Episode 61
Twinkle finds out that Raminder is actually her father, thanks to Cherry. Anita comes to the house with the intention of getting Raminder arrested for insurance fraud.

Wednesday 21 August 2019 – Episode 62
Once again Anita’s plan fails as Reminder settles his issue with the insurance company. Kunj has a brilliant idea to remarry Leela and Raminder. Twinkle finds out that she has a younger sister named Mahi.

Thursday 22 August 2019 – Episode 63
Mahi gets accepted into the family. Mahi reveals that she can’t get married, because she is already married. The real question is, who is the man Mahi is married to?

Friday 23 August 2019 – Episode 64
Twinkle corners Yuvraj and he confesses to what his real intentions are. Kunj tells Twinkle that she is not alone and that he trusts her completely. Kunj sees that Twinkle is upset and he makes it his mission to bring her smile back.

Saturday 24 August 2019 – Episode 65
Anita confesses to burning the photos and adding the dried fruit to the porridge. Anita and Twinkle join hands to try break the alliance between Yuvraj and Mahi. Is Twinkle making the right decision to trust Anita Luthra?

Sunday 25 August 2019 – Episode 66
Yuvraj’s influence on Mahi makes her start to hate Twinkle. Kunj cancels his plans to move overseas and instead he decides to join Twinkle to help stop Yuvraj from ruining Mahi’s life.

Monday 26 August 2019 – Episode 67
Yuvraj gifts Mahi a special bottle of champagne, only it isn’t really champagne. Twinkle and Kunj’s cover gets blown and they get asked to leave the function. Yuvraj ruins Mahi’s face and all the evidence points to Twinkle.

Tuesday 27 August 2019 – Episode 68
Mahi gets welcomed into the Sarna house as the new daughter in law. Yuvraj instigates Mahi against Twinkle. Kunj arranges for Mahi’s plastic surgery to be done, but Mahi decides not to do it unless Yuvraj pays for it.

Wednesday 28 August 2019 – Episode 69
Twinkle tries to trick Yuvraj into taking part in a boxing match. Kunj decides to participate instead and attempts to win the money for Mahi’s treatment. Twinkle is left disturbed after receiving an unknown message. Who could it be from? Fire And Ice August Teasers 2019 On Zee World

Thursday 29 August 2019 – Episode 70
Twinkle decides to compete in the Mrs. Amritsar competition and as a result, it causes a misunderstanding between her and Kunj. Yuvraj tries to widen the rift between Twinkle and Kunj. Twinkle discovers something disturbing about Manohar.

Friday 30 August 2019 – Episode 71
Manohar tells Twinkle the truth about what happened between Purvi and him. Yuvraj succeeds in causing a bigger rift between Twinkle and Kunj. Twinkle outsmarts Yuvraj by exposing Purvi and her partner. Is the game over for Yuvraj?

Saturday 31 August 2019 – Episode 72
Purvi gets arrested right before the dress up contest. It becomes clear to everyone else that Kunj and Twinkle are perfect for each other. Twinkle realizes that she’s fallen in love with Kunj, but she fears that he doesn’t feel the same. More Teasers Coming Soon…