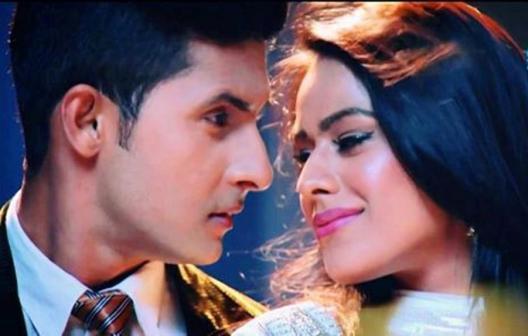 King of Hearts 26 October 2019 Zee World Update – Bansi applies turmeric on Kunal and tells him to go and have a bath because today is Roshni’s Haldi ceremony.
Shabnam tells herself that Roshni’s Haldi ceremony would be the beginning of DD’s doom; she’s waiting for Roshni to get married to Kunal because she knows Roshni would never regain her memory again due to the many doses of the medicine she has injected her with. Sid/Jyoti hears her and tells himself that he would be at the haldi ceremony to see Roshni regain her memory.

It’s time for the Ceremony. Shabnam brings the turmeric paste and starts to apply it on Roshni’s skin. Sid/Jyoti flirts with Premal and blows him a kiss. Premal is so shocked that he falls on Shabnam and the turmeric paste splatters on Roshni’s dress. Jyoti tells Roshni to go and wash it off so the stain doesn’t stick. Roshni goes to the bathroom.
Sid enters the bathroom as himself, without the Jyoti costume.

King of Hearts 26 October 2019 Zee World Update – Roshni is shocked. He holds her and says applying turmeric is beneficial but the person applying it matters. He rubs some on her cheek and tells her to look in the mirror.
Bansi calls for Roshni. Roshni opens the door to leave but Sid holds her hand. She leaves anyway.
Kunal and Shabnam are out of the house. Kunal gives a Man a large bundle of money. Shabnam asks Kunal what he’s doing when Roshni is already going to be his Wife in 2 days? Kunal says he doesn’t want to take chances so he’s making sure he has a plan B.
At home, Bansi tells Shakun to move the sofa. Premal wants to impress Jyoti so he says he would do it instead. Sid/Jyoti knows Premal is doing it to impress him. Premal tries to lift the sofa but complains it’s too heavy. He manages to lift it and breaks his back in the process. Sid/Jyoti lifts him up.
Shabnam and Kunal enter the house. Premal falls on Jyoti, knocking him to the ground and his wig shifts a little in the process. Shabnam is shocked. Sid realises his wig is about to come off. He quickly covers his head with his hand and puts the wig back in place.

Shabnam and Kunal come out of a room where they were eavesdropping from. Kunal tells Shabnam that they have to execute plan B.

Roshni goes to Bansi and tells her she doesn’t want to get married. Kunal and Shabnam are searching Roshni’s room frantically. Bansi throws a glass of water at Roshni’s face and asks if she has lost her mind! She tells her she will get married in 2 days and it’s final! She tells Jyoti to take her to her room.

Shabnam sees them coming and informs Kunal. Kunal finds what they are looking for, Roshni’s Passport. Sid/Jyoti and Roshni enter the room. Shabnam and Kunal hide from them and slip out.

Bunty comes to see DD outside the house. He is in disguise so that no one else will recognise him. He tells DD he saw the Doctor like she told him to and he gave him an antidote for Roshni. He gives it to DD. Shakun comes outside and walks up to them. She asks who Bunty is? DD says he’s her Client. She tells that her design will be good and asks Bunty to go. He leaves. Shakun tells herself that DD must be up to something. DD moves away to call Sid and tell him that she has the antidote. Sid is relieved. Shakun heard what DD said.

At night, Sid enters Roshni’s room as himself. He tells her he knows she’s been thinking about him. He brings her a snack and says someone said eating sweets always helps. He feeds her some and she says it’s very tasty. Sid prays the antidote in the snack brings Roshni’s memory back.

Later on, Roshni is asleep. DD enters the room and says she hopes the antidote becomes effective soon. Sid says she will sleep for 12 hours and he hopes she regains her memory soon.

Shakun is looking for Kunal. She bumps into Shabnam who is carrying the drugs she injects Roshni with. They bottles fall out of her hand and break. Shabnam gets very upset. Shakun tells her it’s only syrup. Shabnam asks what she means? She looks down and sees ants have gathered around the spill. She dips her finger in it and tastes it. She’s shocked to find out it’s glucose. She knows it’s DD and Sid who have done it. She returns to the hospital and asks for a heavy dose. The Doctor says it can prove fatal. Shabnam says she doesn’t care! She pays for it and leaves.

Premal is in the hospital. His family, Jyoti and Shabnam are with him. The Doctor commends Jyoti for bringing him to the hospital on time. Premal asks Jyoti why she won’t just spend the rest of her life with him? Bansi says she agrees and she wants Premal to be happy, so Premal and Jyoti will get married on the same day as Roshni and Kunal. Sid/Jyoti starts coughing.
Sid/Jyoti is in Roshni’s room. He decides to wake her up and see if she has regained her memory.

Bansi enters and tells him the Priest wants to meet him. Sid has no choice but to go with her.
Shabnam enters Roshni’s room as soon as they leave. Sid/Jyoti signals to DD to go to Roshni. DD gets to the room and peeps in. She sees Shabnam giving Roshni an injection but thinks it’s just the glucose.

Roshni starts thrashing about the bed, even with her eyes closed. DD asks Shabnam what she has done to her! Shabnam tells her to leave and closes the door. DD goes to the living room and informs the others that Roshni is having a seizure. Everyone knocks on the door. Shabnam opens the door. They rush to the room and Sid/Jyoti asks Shabnam what she did to her! Shabnam says she didn’t do anything. She says she came here to wake her up, but suddenly, she got seizure.

Kunal takes Shabnam to another room and berates her for harming Roshni. He says if anything happens to Roshni, then he will not spare her! Shabnam tells him that DD and Sid changed the drugs and they have been giving her glucose for days. She says when Roshni regains her memory, they will be in trouble. She tells him to stop Jyoti’s Doctor from coming in.

The Doctor arrives with Raj Khurana. Raj in disguise pretends to be the main Doctor while the real Doctor poses as the Assistant. The Doctor says Roshni was poisoned and they will need to take her blood sample. He injects a drug into Roshni’s vein and afterwards, he draws the blood to send for test. As they are leaving, Kunal trips Raj and the blood sample spills. Raj says now, they will have to wait until she gets fine.

Sid/Jyoti walks out with Raj and the Doctor. The Doctor tells Sid that he has given Roshni the antidote, so no need for another blood sample. Sid thanks him. He sends DD a text to get everyone out of the room.
DD starts attacking Shabnam, holding her responsible for Roshni’s condition and ordering her out of the room. Everyone follows, trying to calm DD down.

Sid/Jyoti runs to Roshni’s room Roshni wakes up with a moan. Everyone rushes back into the room. DD asks her to open her eyes. Roshni opens her eyes and asks what happened to her? Everyone looks at her anxiously. Shabnam thinks she knows nothing. Roshni asks if she’s not getting married today?

DD and Sid are heartbroken that she hasn’t regained her memory. Kunal and Shabnam are happy. Kunal says he will marry her today. Bansi agrees and tells Roshni to get dressed. DD tells them to postpone the wedding as Roshni is not feeling too well.

Bansi says the wedding must take place! DD is crying by the Poolside. She says her daughter is damaged by that medicine. She says they will snatch her daughter away from her and asks God to do some miracle as she can’t take it anymore. The Ceremony is about to begin.

Kunal sits on the mandap. Jyoti sadly escorts Roshni who is dressed as a bride to the living room. Roshni takes Bansi’s blessings and tells her that she also wants to take blessings from the Aunt by the Pool. Bansi looks on. Jyoti asks Bansi to let Roshni take her blessings as well. Bansi agrees.

Sid/Jyoti takes her to meet DD. DD asks Sid if he will let Roshni get married? Roshni says who said she would marry Kunal? Sid and DD are shocked. Roshni calls DD ‘Mum’. DD hugs her, crying because she regained her memory. Kal Ho Na Ho music plays… Roshni identifies Jyoti as Sid and hugs him. She cries heavily. Sid gets emotional too.