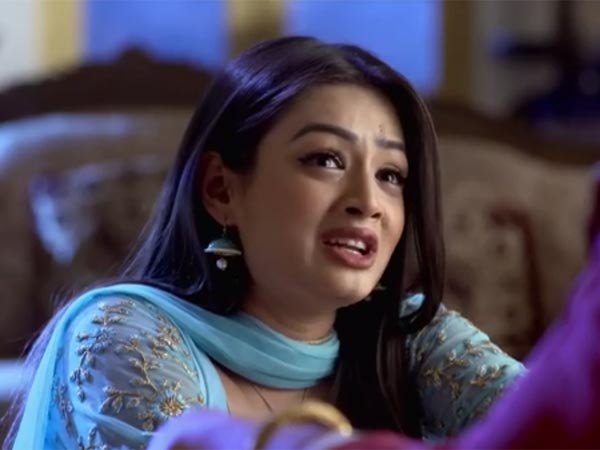 12 years later, a colllege ground is shown and Mahek’s mother is praying and swathi.comes and scares her…she tells that head master has called them… they go to his cabin and he informs that he has one good news and one bad news. ..she ask to tell good news first. .he informs that Swati has passed with distinction marks and he can arrange a job in law farm in some big city.

Mahek’s mom says it’s not needed she will not send her to any other city…and ask for bad news…he informs that Mahek got 32.5 percentage if she could have got 1 mark less than she could have failed…she gets worried about her future and says she must be busy fighting somewhere…mahek is shown fighting with a boy in a ring …he hits her and make fun of her and she gets up and hit him back…and the boy feels unconscious.. Mahek rubs the blooper spread on her face.

Mahek mom’s comes their and she runs away from their…she makes her run in the whole area…they reach home ..Mahek’s mom tries to beat her she hits and her coach comes their and she tells about her percentage and ask how will she get a admission in college…he informs that Mahek got admission in a big university because of her boxing and she can stay their along with family…and says she will be competing for a country…mahek thanks him..and says she is alive of the because of her mom and got coaching because of him…he tells she has to win best sportsperson of the college..and than compete for than compete for another competition…mahek says she will win for sure and no one can beat her…

Shaurya is shown …he goes to collect his trophy and the chairman congratulates him saying he won again…his principal tells he won this for 2 years and now he has to win in the final year also …Girls gather him and click pic him and give him flowers…his dad calls and congratulates him and says he has a surprise for him..he asks what’ is it ..car ..or bike ..he tells it’s more than that and asks him to come… Shaurya friends take him for the party…

Mahek’s family gets ready to leave the village… neighbors all gather and ask them to take care …Mahek’s mom says their is a box Inside and asks Swathi to bring it Safely….

Shaurya drives jeep on road … his friends tell they will celebrate the whole day and whole night…mahek gets down in the city along with family…Mahek’s mom and Swathi go to bring water …mahek wait their and because of Shaurya’s jeep mud water splash on Mahek’s face …she shouts at him asking to stop his jewp… Shaurya puts a break and looks at mahek. .Zindagi aur song plays… Mehek 26 October 2019 Update On Zee World Series

Mahek says to Shaurya stop the car.. He stops the car and turns around. His friend says run.. They drive away. Swati says how did this happen? She says those rich boys.. I would have broken their teeth. Sarti says you just came and you want to break teeth. Wash yourself. She cleans her. coach says auto is here lets go.

Shaurya and his friends cheers. Shaurya’s friends says we will have party from you. Mahek comes to the market. She recalls her past. She sees flash backs. Herr mom says what are you doing… Lets go.
Mahek sees someone cooking chinese. She says add some aginomto in it. Sarti says what? How did you know? you never cooked. mahek says yes how did I know this? Where did I hear this? Sarti says let’s go. Coach says welcome to this house.

It was Mahek’s old house. he says this is main market. It used to be a very good neighborhood. They enter the house. Mahek sees many flashbacks. Coach says Swati see where is tap? mahek points at the pump. He says how did you know? Have you been here before? She says of course taps are in center. The man shows them the house. Sarti says where is the kitchen? Mahek says its upstairs. Everyone is dazed. Sarti says how did you know?? Mahek says I saw it from the balcony.

Swati says are you okay? She says yes maybe I am tired. Mahek goes to rest. Mahek sees the locked store. There are photos of old family inside. Mahek hears laughter. Shaurya is out with his family. They come to bbq restaurant and says boxing champ is with us. Cook good food. Mahek says to Swati lets go out and eat chaat. Sarti says I am cooking in an hour. Mahek says you will all be hungry when you see the amazing chaat. Lets go. They go out to eat chaat.

Shaurya is at nearby BBQ dhaba. Swati says its so spicy. Mahek says its very tasty. Shaurya pays for his friends. Karan says lets run without paying. Shaurya says I will never do that. He says then we are going. They sit in the car. Mahek sees them. she says stop.. Shaurya sits in the car and they run. Mahek goes after them in her scooty. Swati says Mahek where are you going…Mehek 26 October 2019 Update On Zee World Series

Shaurya says to his friends it was bad. I will go and pay them the next day. Mahek comes there. she breaks Shaurya’s windscreen. She breaks their car. Everyone is dazed. Mahek says we are equal now. She sits on her scooty and runs. They go after her. karan says we will hit her so she falls from her bike. Shaurya comes near her but doesn’t shove. Karan says what are you doing. Shaurya wonders what is happening with him. She drives past. Karan says she ran because of you.

Mahek comes home. Sarti says where did you go? She says I went after those boys. Sarti says are you crazy. It’s not your responsibility to teach a lesson to all bad boys. Mahek says they deserved it. Mahek hears shaurya’s screams in sleep. She wakes up and comes out. Next morning, Mahek gets ready. Sarti says do arti before leaving. Mahek says thank you God for bringing us here. I wanna be a sportsperson of the year. Mehek 26 October 2019 Update On Zee World Series