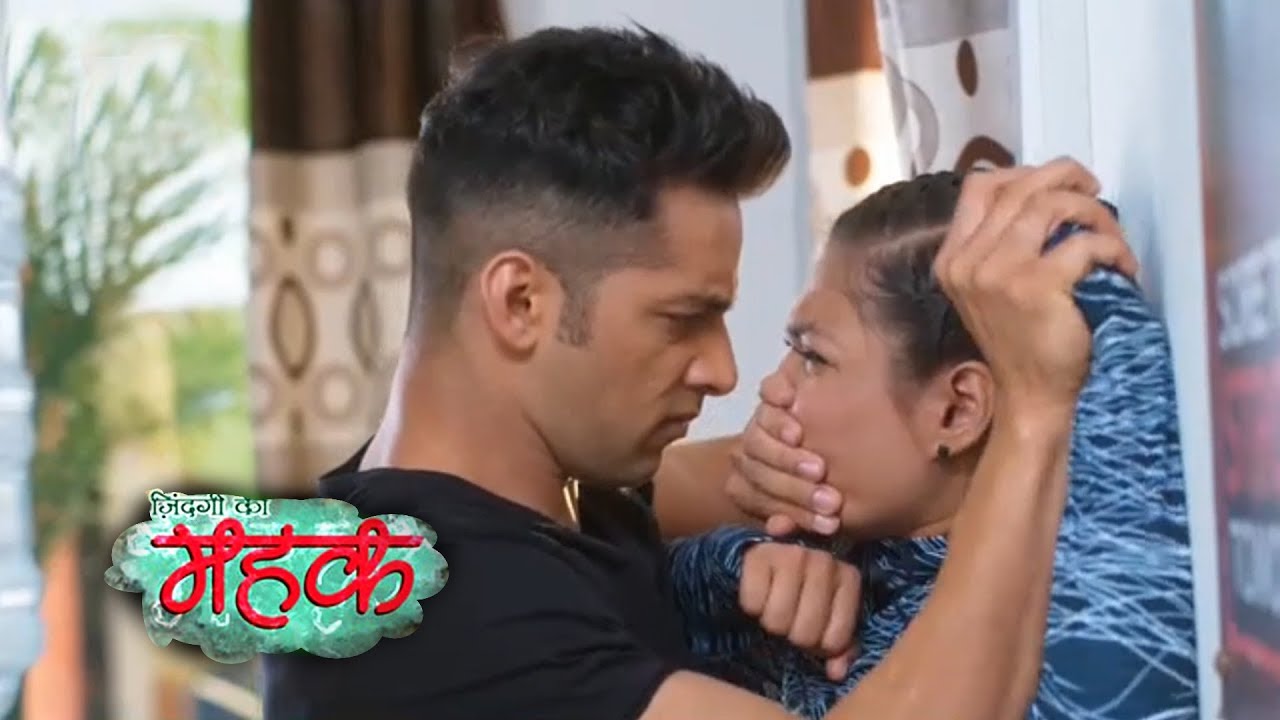 The chunri falls on Mehek and shaurya darmayan sing plays..They share eyelock..
Jagurath pulls them apart.. He says I told you so many times to only concentrate in boxing. He leaves and thinks have to do something to this girl. Mehek and Swathi also leaves..

Jagurath cones to mehek house.. And says I’m here to talk about your daughter.. as far as I know your daughter won so many medals. I’m asking you to leave the city and offers 2 and half crores.. And married the two of them.. Mehek gets angry at Swathi and stops her and Swathi says uncle thanks for giving advice now we will do what we have to. Now go.. Jagurath says at least try to give manners elders. Where there no father you can’t talk like that…

Coach comes there and say I will complain in sports administrator.. Jagurath pulls his callor and Says do what ever you want.. He gives cheque to mehek and says leave the city.. Mehek lits the cheque and asks him to go out of house.. Coach also asks the same he leaves..

At college, Shaurya feels why I’m feeling strange with mehek. Vi have to go talk to her.. Mehek talk to coach and Says I know all This behind that shaurya will be there..
Shaurya asks someone about mehek she says no.. He thinks I have to talk to her somehow. I have a connection with her and have to clear the MU..

Shaurya comes to mehek mehek sees him and wants to hit.. But coach stops her she listens.. Shaurya ask I want to talk to you.. She asks what he wants to go out. Mehek asks tell me here only.. But he wants to talk outside..

Shaurya is playing.. Mehek comes there and asks let’s go where we have to go.. They came to cafe.. He says I get nightmares.. She says I know you told me.. He asks do you remember.. He says Ha I get flashes of yours and mine someone is behind us.. When I come to Chandini chowk also I felt strange and felt as I know that place very well. She thoughts I also felt the same…Mehek 30 October 2019 Update – Zee World

But she goes from there.. He runs behind her.. He pulls her in him.. Kantha is near them but all auto is between then she sees them and calls them but they runs from there.. Auto hits kantha she says shaurya and mehek I saw them..

Mehek is at canteen. She reminds coach words that keep friends close and enemies away and Sharya words about nightmare she thinks it may be his prank.. Shaurya comes there and ask what I asked you that you ran away.. He says you eating samosa chunni I know one place where they are superb taste and we will go there she says no.. He asked you will beat but can’t come out alone Shaurya Says tomorrow I will be waiting for you at your place .

Shaurya Says Tomorrow I will be free after class.. So then we can go. She says no. He asks are you scared. Mehek says why will I scare I won over you at child age only.. If you want to go then go with your useless friends.. He says tomorrow I will be waiting for you at your place.. Mehek thinks have to go with him to his plan…

Mehek’s sister asks her if she is dreaming or trying to escape work in kitchen. Mehek says finding reason to talk to Mehek. Mehek tells her mom that her friends are going out for dinner and i am asked to accompany. Her mom refuses permission as they are in Delhi. Her elder sis supports Mehek. Her mom still refuses coz of Mehek’s short temper.

Mehek recollects Shauryas words of waiting for her. Her boxer coach tells Shaurya to encourage friendship with Shaurya for her own good, to know next step ahead. Mehek reveals how Shaurya invited her for dinner. Boxer coach tells her to meet Shaurya to find out his plans. They say that Shaurya and his father have realised we will not relent to their pressure so they have changed plans.

Shaurya is waiting for Mehek and Mehek arrives. He says thought you got scared. Mehek says dont show your teeth, lets go. The duo arrive at a dhaba. They feel like they have been there before. Shaurya invites Mehek inside the dhaba. Shaurya is delighted to discuss about food. Mehek asks him to drop gloves and pick up cooking stuff. Shaurya says am a good chef.

Mehek says he must be cheating. Shaurya takes her challenge to cook and he starts cooking. Mehek watches him. Right then a bunch of goons arrive at the dhaba.

Boxer coach asks Meheks mom to relax and not worry for Mehek. Mehek gets a message from Boxer coach. Shaurya brings the dish to Mehek. The goons are misbehaving with the other waiter. Mehek says your passion is in cooking. Mehek says yes.He says, Boxing is for dad but i love cooking. He tells her to keep it a secret. He feeds Mehek the dish and she smile.

The goons taunt Mehek-Shaurya saying what a laila-majnu. Mehek is furious. Shaurya asks her to calm down. The goons encircle them. Shaurya recollects past moments. He says how dare you touch my Mehek. He starts beating the goons. The other waiters stop him. He asks Mehek if he she is fine. He says sorry. Mehek says lets go home. Mehek thanks Shaurya for fighting for her. She says i know how to handle them. Shaurya says dunno what happened to me. Mehek asks if he is fine? Shaurya is drooling on her.

Mehek turns to leave but says no one can tell that you love cooking so much. Tell me what can i do for you? Shaurya says nothing, thanks. Mehek says my turn to feed you. Cant cook, will treat you later.

Shaurya comes home and his dad asks where was he? Shaurya says got late with friends, sorry. Yuvraj tells Shaurya his brother is sick so his mom and sister are with him but his grandmother is coming and there is havan. He has to attend.

Mehek’s dad Vikram is shown the location of Mehek’s place. Shaurya-Mehek are practicing. He says it was so tough to come for practice on Eid. You are calling me to Chandni Chowk. He says dad will not let me come. Mehek teases him saying he has to come to Chandni Chowk. He is so confident always but scared of his dad. Shaurya says am not scared of anyone. Mehek says you have to come. If you think i am your friend, you will comee, else dont tell me.

Boxer coach overhears about performance enhancing drugs and decide to tip off the Principal. Yuvraj is overseeing the arrangements for the havan. He calls Vikram and asks to get on the job on time.