The Heir 27 October 2019 Update On Zee World – Everyone is looking for Babli. They hear her voice. Jagan comes and shows Babli’s video. Babli shouts for help. They get shocked seeing video. He says I kidnapped her, don’t worry. They look at him. Raj sees Mannu. Sakshi boils milk and takes for Raj. Mohini smiles and holds the poison bottle. She signs Chandar.

Jagan says don’t teach me, there is nothing to have shame. Amba says you have hidden Babli. Jagan asks how was Babli looking in bridal dress. Sukhi says you are doing wrong. Jagan scolds him. Amba asks what do you want. He says Amba understands, she came to point, Amba will go to panchayat and get Simran and Chandar’s marriage mahurat in 3 days. Amba says I will not let this happen, I will die. He says I won’t let you die, if Chandar doesn’t marry Simran, he will marry Babli. They get shocked.

Sakshi gets breakfast for Raj. Mannu looks on and goes. Chandar comes there. Mohini makes Mannu hear about rat poison fallen in milk, which Sakshi took for Raj. Mannu gets shocked. She goes to see. Sakshi says Raj sorry, I will get pickles. She thanks Raj and holds his hand. Mannu says he left me to die, why shall I save him. Mohini stops Raj and says this milk has poison. Sakshi says its not possible, I got this rat poison bottle there. Mohini says ask Preet, she was also there. The Heir 27 October 2019 Update On Zee World

Sakshi asks Mannu did she know this. Mannu says yes. Sakshi scolds her. Raj thinks what happened to Preet, she didn’t stop me knowing the milk has poison. Mannu goes to room and cries. Rohan asks why are you crying, Raj is fine. He recalls Mannu telling her plan to do acting to show Chandar and Mohini that their unity broke.

He says your plan was good to know Chandar. She nods. He recalls hearing Chandar’s plan to just keep empty bottle. Rohan says we will include Raj in our plan, don’t worry, I remember well, I asked you who are you and you said I can regard you sister, you are hiding sorrow from me, why are you filling poison in Raj’s heart. She says so that he stays happy when I go. He asks where are you going. She says Raj and I have a contract, Raj will help me in getting Simran’s memory back, then I will leave from this house, maybe our relation is made on hatred and will break.

Sakshi asks Raj to break this relation, Preet did limit too, if anything happened to you. Raj thinks why is Preet behaving this way, she didn’t tell me about poison. Rohan says no, you can end the distance if you want. Mannu cries and says nothing can get fine now, thanks for support, you have always saved Simran, promise me you will never tell this to Raj. He goes.

Raj says I will fulfill my promise to Preet. Sakshi asks what promise. Raj thinks I can’t tell Sakshi about Preet and my contract. He goes. Chandar sits meditating. Raj gets the gift box and recalls Chandar. He thinks maybe Simran recalls something seeing this gift. He swaps the doll with another gift. Chandar takes the gift for Simran.

Simran likes the doll. Raj looks on and gets shocked, thinking how did the gift change again. He comes to them and checks. He says how can this happen. Chandar asks did you not like the doll. Raj scolds him. Chandar asks Mannu to manage her husband, don’t know what he wanted to gift Simran.

Raj pushes him. Raj asks Mannu to move. Mannu asks Raj to leave. Raj says you are taking his side. Mannu says I can’t trust one who left me to die, better stay away from my matters. Chandar smiles and takes Mannu’s help. He asks her to drop him till room. Mannu takes him. Raj gets shocked.

Chandar goes with Mannu. Mohini thinks Raj has tried to get Simran’s memory back and Chandar doesn’t care, I have to do something. Mannu threatens to push Chandar down the stairs. Amba says Simran will marry Chandar. Raavi asks how can you do this. Amba says Babli has her long life ahead, I can’t ruin her life. Jagan taunts her. He asks her to remember and not do anything against him.

Sukhi thinks just Mannu can save us, how to inform her. Chandar reminds Mannu how she has applied balm on his back last time. He asks her to apply balm on his back and removes his kurta. He starts flirting.

He says filling sindoor in maang doesn’t make anyone married, did Raj touch you, he will run with Sakshi, what will you do then, will you stay alone, why are you wasting your life.

Mannu asks will you marry me. He gets shocked. She says leave it, you can’t manage this fire. She goes. Her anklet falls there. Chandar looks on. The Heir 27 October 2019 Update On Zee World

Raj catches Mannu and asks what’s happening, you don’t care to support Chandar, you know he is a cheap man. She scolds Raj and sees Chandar listening. She goes thinking Chandar get trapped. Chandar smiles and thinks fire is igniting. He goes. Raj thinks what is Preet doing, Chandar is a snake, how to explain her.

Jagan and Amba come to Bajwas house. Amba says I called you all here so that we can change marriage date. Sarpanch says marriage can’t happen. Amba says I want this marriage to happen within 4 days. Mannu and Raj get shocked. Chandar smiles. Mannu asks why are you doing this, when Chandar agreed to wait for 15 days, you can’t do this. Chandar says I have no problem. Sarpanch says fine, this marriage will happen after four days. Panchayat leaves.

She asks why did she not tell me. Raj says I will tell you on one condition, you will tell me why did you do this, what problem you have with Rohan. Mannu tells her plan and says Rohan was also part of my plan. Raj gets shocked and asks what about Chandar, you know he is cheap man. Mannu says you want to know my plan, I want his attention to come on me than Simran, I will do anything to save Simran, tell me why is Amba helpless. Raj gives her Sukhi’s letter. He says Sukhi gave this to me, read it. Mannu reads letter about Jagan’s threatening about Babli. She gets shocked. 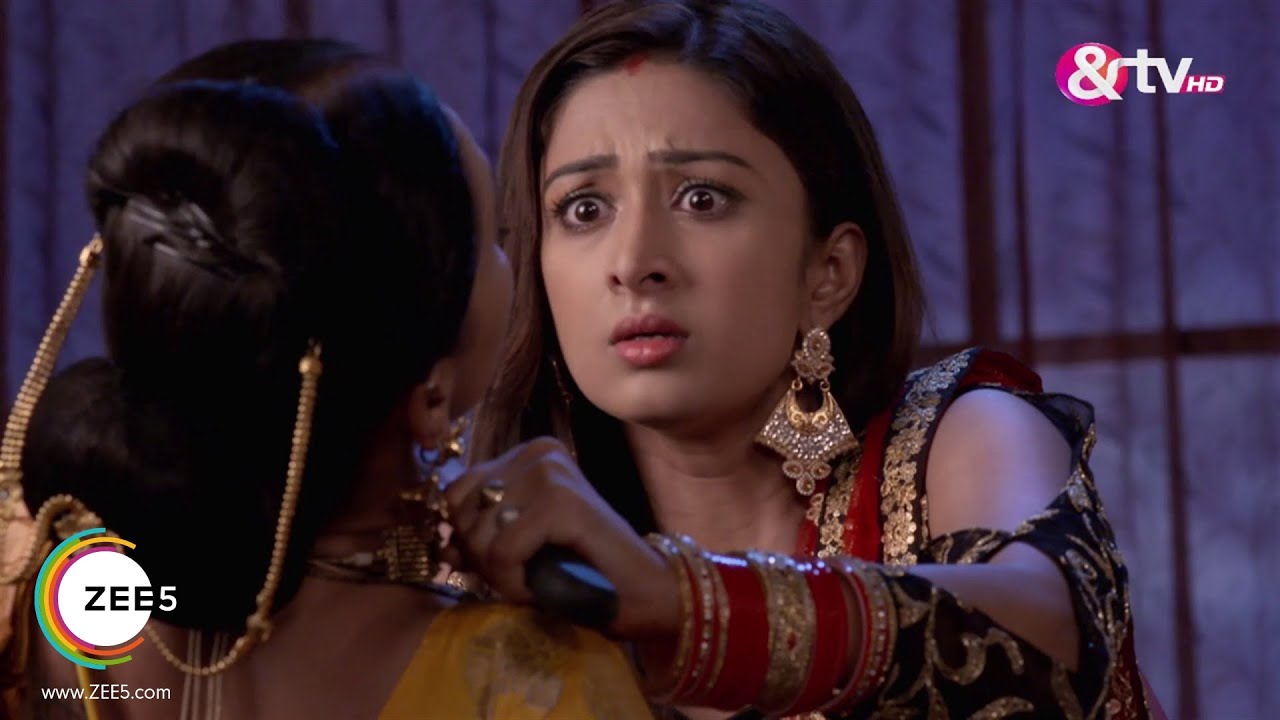 Raj says this is truth, if Simran’s memory comes back in three days, she will refuse for this marriage. Mannu says I know what to do, he will do anything to get me, once he agrees, I will ask him not to marry Chandar. Raj says don’t be mad, you won’t do this. She asks why, do you have any other plan, did Simran’s memory come back, I can’t sit believing fate, you do what you want, I will do what I want, I will save Simran and leave from your life forever.

Amba and Raavi are doing preparations. Raavi worries for Simran. Mannu calls Sukhi. Jagan answers and asks Sukhi to talk. Sukhi gets tensed. Mannu thinks Jagan is around and makes a story. Jagan asks what did she say, call back. Sukhi calls Mannu and asks did you call. Mannu says maybe call connected by mistake. Jagan goes. Mannu says I will save Simran from Chandar. Raavi says Mannu is buying apples in such time. Amba says she understood and told us that we can’t risk one sister to save another, she will do something.. Sukhi says she is very clever. Amba asks Sukhi to get Jagan’s phone, she wants to see Babli’s video, maybe she can find out a clue.

Chandar comes to Mannu and says I found a doctor who can make Simran fine, but you have to come with me alone. Mannu says fine, I will come, but if anyone sees us, they will make stories, will you marry me. Chandar flirts and says you have too wear this dress and come with me, I should be able to trust you that you love me. She sees the short dress and says fine, I will wear this and come. Raj comes and scolds Chandar. The Heir 27 October 2019 Update On Zee World

Simran asks where is the doctor Chandar. He says he will come. He asks her to have wine. Raj scolds Sakshi and says Preet is alone with Chandar, he is a devil, why did you make me faint. He calls Mannu and sees her phone ringing. He asks Sakshi how did Preet’s phone come here.

Chandar flirts. Mannu throws the wine and acts of drinking. She asks him to call doctor. He says no doctor will come, you wanted to spend time with me. He gets close. She gives him papers. She says you love me right, you trust me, marry me, sign these papers. He throws the paper and says we don’t want any excuse like marriage, we have a chance right now. The Heir 27 October 2019 Update On Zee World