Mahek says to Sajita i only asked shauyra how he is. His father hit him. Coach saw it and is making fuss out of nothing. Dadi makes shaurya eat. Yuvraj says you have to eat to heal these wounds. shaurya says my wounds will heal when Mahek loses.

Coach says he is playing with you. He is fooling you. He wants to take your family from you and make you alone. He wants to be your friend so you can not focus on him. Mahek says don’t argue with him. Coach leaves. Sajita says are you crazy. Have you forgotten his favors on us? And brought us here. How can you be so rude to him.

Mahek says he is like a God to me as well but I can’t listen everything. Sajita says we have this house and food because of him. He never cared for himself. If he didn’t save us your father would have married you to an old man.

Shaurya looks at Gulab jamun and says I will do wonder with it. Swati says should I take food for Mahek? Sajita says no. How can she disrespect coach for that guy. Mahek gets a call. She says you.. Its Shaurya. He says Mahek are you okay? This all is my mistake. Should I come? She says no don’t do all this. He says okay as you say. she says how is everything in your house? He says I have seen this from childhood. I was gonna leave house. How do I tell daddy I am doing all this for myself not you.

Mahek says coach also thinks I am wrong and you are a bad guy. Shaurya says their mentality is small. Finally someone understands me. And they didn’t even come to me with food. I am so hungry. She hangs up.

Yuvrahj comes to principal and says rules are for everyone. Mahek got admission here on grace marks. She has to take 50% or she will be out of college. He leaves. Yuvraj says to coach she is zero is studies. She will become champ is she passes the exams. I will see how she succeeds.

Mahek says what should I do. I can’t study. How will I get 50%. Coach says Yuvraj got this point. I would got you cleared otherwise. He and his son are in this game. Mahek says its not shaurya’s mistake. How will I get 50. He says even I can’t help you in this. you should join coaching class and take help from swati. Mahek sayys yeah you are right.

Shaurya comes to Mahek. He says don’t worry. I will help you in exams. I am class topper and your senior. I can help you more than anymore. Mahek says coach sir is working. I will study form Swati otherwise. Shaurya says there is very less time left. don’t ruin your career in name of ego. You have to take 50% say yes I will find away out. If you fail forget boxing. Mahek says okay teach me.

Coach calls different people to teach mahek but they all say that very few days are left. Mahek says I will study on my own. He says yes you have to. Mahek texts Shaurya teach me. Shaurya tells Yuvraj. Yuvraj says well done my son. Win her trust completely. Mehek 2 November 2019 Update – Zee World Series
Shaurya comes to college. Mahek texts him I will see you at night.

At night, Mahek sneaks out of the house. She comes and sits with Shaurya on street. They both study together. Mahek looks here and there. She is sleepy. Shaurya says focus here. Concentrate. He says okay sleep. We will study after boxing practice. Mahek goes in.

Mahek is doing boxing practice. Yuvraj gives shaurya a paper and says this should be in her bad. Shaurya meets Mahek and teaches her. He says solve these questions. Shaurya puts the paper in her bag. He texts Yuvraj done. No one can save her now.

Coach calls Mahek and says where are you? She says coming. Mahek sees samosas in canteen. She eats them. Coach calls again. She says I am coming sir. She comes to him and says I forgot my bag in the class. He says this is protein shake and pppowder. Yuvraj comes with management. Principal says she has stolen question papers. Coach says enough with your stupid stories. 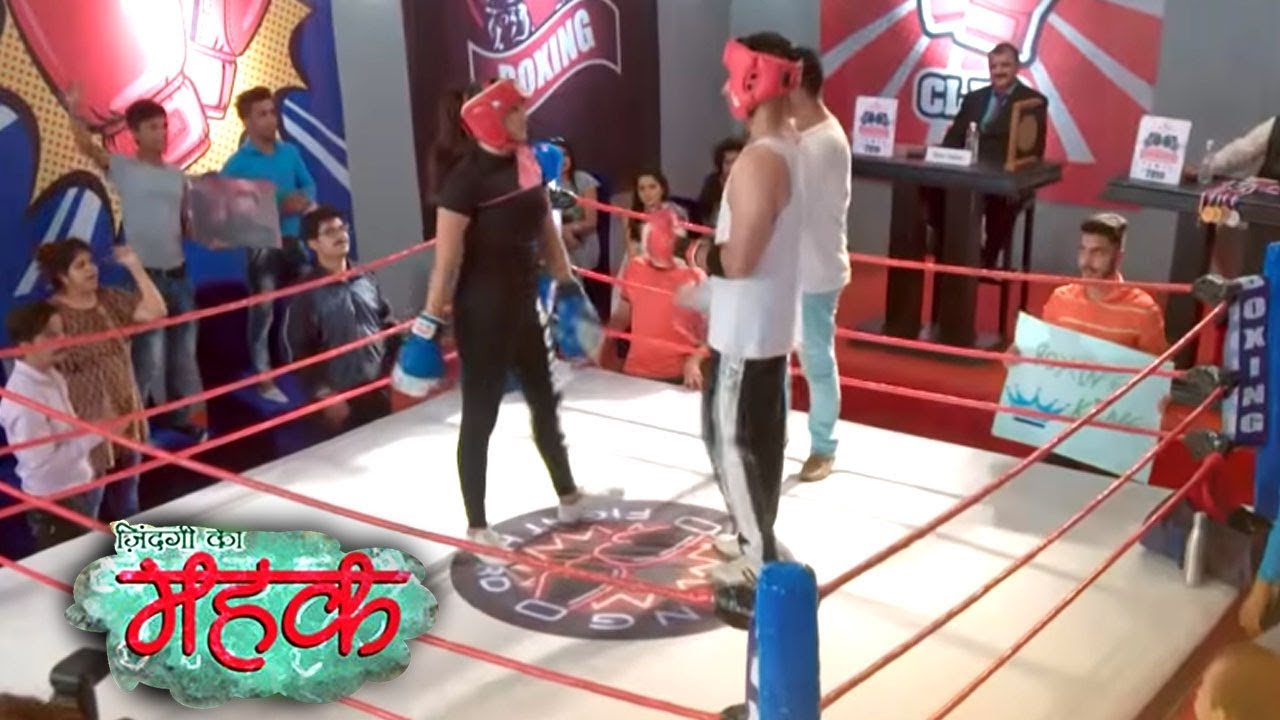 Professor says okay let us check. Mahek says how long will keep accusing me? Who is he to tell you to check my bag? Yuvraj says if you haven’t done anything then show your bag. Check her bag she would try to hide it. Professor says Mahek don’t give him a chance and cooperate. they check Mahek’s bag.

Sajita sees a woman falling. she gets hurt. She picks her up, its Kanta. She takes kanta to hospital.

The teacher takes out samosa from her bag. The teacher takes out a paper its wet. They can’t read anything. Yuvraj says it must be exam question. Coach says you are saying as if you put it in her bag. Shaurya says to Yuvraj can’t you leave her alone? I am sorry Mahek. Neber knew my dad would stoop so low. Coach says this is all joined game of you and your dad. Shaurya says I can’t tell you how clean my heart is. he says my dad accused her falsely.

You would have suspended Mahek if it was paper. Similary Yuvraj should be kicked out of sports committee. Principal says we will announce our decision soon. They leave. Mehek 2 November 2019 Update – Zee World Series

Shaurya comes home. Yuvraj is angry. He says how will I help you? You got me out of sports committee. He says that paper was useless. we would have been in trouble so I had to do this to save you. We have to make a bigger plan.

Swati says mahek ma is nowhere. Her phone is off. Shaurya says once she is in my trap she will regret coming to the city. Swati and MAhek are worried for sajita. Swati goes up to take her phone. Shaurya comes and gives Mahek flowers. He says these are for our friendship. I had to make up for what dad did. He gives her ssamosa. Swati sees him. He says I should go now. Swait says ma is in hospital.