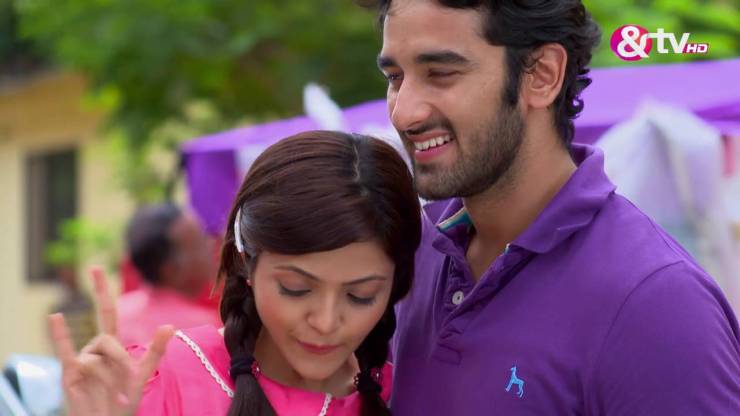 Gangaa 4 December 2019 Update – Zee World Series Krishna goes and asks Sagar what’s the matter and why isn’t he talking to her. he doesn’t respond. she asks if he fought with her mother, and when he complies, she asks him to talk to her at least, as they are friends at least. when she continues to irritate him, he says that she doesn’t have any idea, how much she is like her mother.

Krishna starts pointing out the dissimilarities between her and her mother and tells about the promise that Ganga made. she got it fulfilled too. he bends on his knees and says that when her mother doesnt want them to be talking, then they shouldnt. but she says that she has decided that she wants to be friends with him. he asks her to listen to her mother, as they shouldnt talk, if she doesnt want, and as it is, he shall go to London, away from her and her mother.

Krishna continues to badger him on and says that she too wishes to go with him, to London. He asks what’s gotten into her and what’s wrong and that she isn’t that special to him, as they are very newly related, that he takes her to London. he asks her if she even realizes what pain it takes to settle in London, as he has worked hard and studied for years to be able to establish himself there and that neither she nor her mother has the caliber or the talent to ever be able to make it to London. He asks her to stop seeing dreams of london, and continue studying, and stop this emotional rant, and do something fruitful in life if she wants to get ahead. he vents out his entire frustration at her, and leaves. she is stunned to receive such a treatment from him. she breaks down into tears. As she rushes back home, krishna is in uncontrollable tears, as she remembers his barbed words.

Ganga finds her and asks her what’s the matter. she rushes from there and is distressed, and starts throwing things on the floor. Ganga is apalled and comes and asks what’s the matter. Krishna narrates everything and cites that he is very bad and an egoist. ganga is distraught and makes her assured that he shall have to apologize when she makes him realize his mistake. but krishna says that she merely wants to be with him as she clutches at her tightly and hugs her.

Ganga thinks that he has crossed all limits today, and he wouldn’t ever gain that kind of respect from her again. Later at night, Ganga continues to assure and advise her not to feel bad because of him. krishna vehemently assures that she wouldn’t go to him and that she was right but she didn’t realize it then and says that she was right in calling it off with sagar, as he is like that. she says that he thinks she befriended him for wanting to go to London and that she doesn’t need his money too. Ganga says that they shall manage on their own. but krishna vehemently assures that she doesnt want to go to london, as she doesn’t have a point to prove to anybody.

Krishna says that she doesn’t wish to go anywhere. Ganga gets emotional and asks her to come along. Krishna asks where is she going. Ganga gets a vessel of water and then distracts Krishna by talking about something her father did to cheer her up.

Meanwhile, Sagar stops at an idol by the lord, and apologizes for hurting a small child, as he knows she isn’t at fault, but she is her mother’s daughter, and that’s what she got punished for. he talks about how to hurt he himself is, but he couldn’t do anything else, as in between their fight, she was being sandwiched. Gangaa 4 December 2019 Update

When Kashish returns late at night, she finds Ganga standing tensely, and then asks how is Krishna. she says that she fine and that the fever has gone down
Ganga asks point-blank if she was busy at work or with Pulkit. Kashish stands stunned. Ganga confronts her. Kashish accepts it and says that love just happened, and Ganga asks her not to get so filmy and asks her to think at least, as Supriya isn’t at fault. she is overwhelmed wondering how is it possible, that Pulkit made a mistake like that. Kashish says that this is a mistake, and wants to rectify it, and hence he is planning to divorce her.

Ganga gets enraged and slaps her tight across her face. While all surround, Pulkit is boggled as to what’s wrong. Supriya breaks it out to him, and he is shocked. all eye him tensely. he denies saying that they are merely friends. Ammaji and others show him the video then, and Pulkit is aghast. now they confront him whats going on, and if he wishes to leave Supriya for that girl. they all reprimand him, for his callous and heinous behavior towards Supriya.

Pulkit responds back that Madhavi and Niru have a different story, and that Supriya shall go through the same pain too. he then clarifies as to how the child shouldn’t be made a bone of contention. he says that he accepted his fate but she went into depression and distanced herself, and he got lonely. he tries to clarify, but she gives him the blame and then points out both their faults. Gangaa 4 December 2019 Update

Meanwhile, Kashish too explains the same as to how she just wanted to help him, through his marital crisis, and never knew when they started loving each other and weren’t able to spend a second apart. Ganga wonders how could she go oblivious without understanding what’s going on. she asks her to forget him, but Kashish says that she can’t as she loves him.

Ganga says that it doesn’t make sense, as she would get nothing out of it, and wonders why didn’t Pulkit solve the problem with Supriya, and he bitterly disappointed everyone. she tells Kashish that Pulkit used her, to get out of the loneliness and that he wouldn’t ever leave his wife, as she knows the family. she asks why should she believe her, as she teaches everyone about ethics, as she loves sagar even after he got married, then how can she be wrong. Ganga says that she did love him, after he married, but never got him close and that she always wanted him to be happy with Jhanvi.

kashish says that she isnt noble like her and that she wants him, and won’t share him. she dials pulkit’s number, but he continues canceling seeing the tension mounting. she dials again but he doesnt pick up. when he doesnt, ammaji asks him to pick up and talk. kashish asks her not to look sympathetic towards her, as she shall go and get pulkit, and he shall answer her questions. she rushes out crying.

Ammaji takes kashish by the hand and drives her out. she throws her, and she directly lands into ganga’s arms, who rushes to save her. she compliments ammaji that once again, she was throwing another girl out today. as she directs insults at her, saagar comes at defense. Gangaa 4 December 2019 Update A verbal duel follows. sagar reminds her not to talk like this, as she isnt related to this family. ganga retorts back saying that kashish is her family and she wont stand anytalking to her like that. kashish is distraught, as she finds pulkit standing there watching helplessly the entire scene. tension amounts.