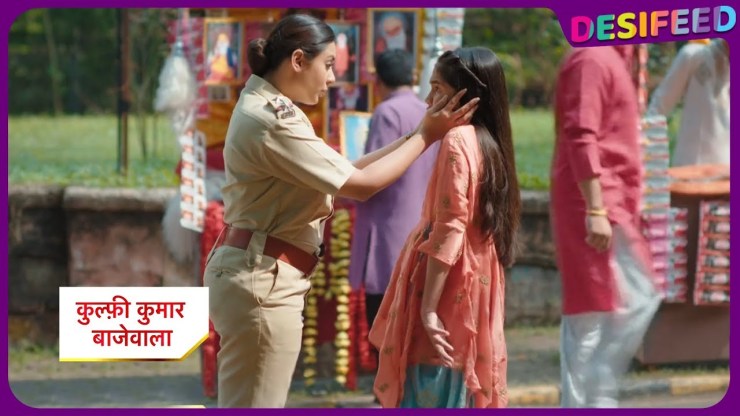 Kulfi The Singing 3 December 2019 The episode starts with Amyra interrupting Sikander when he is about to wake Kulfi up. She accused him of going to his real daughter. Kulfi woke to see Sikander and Amyra together. Amyra demanded for more time with Sikander to prove to her that he loved her more. It broke Kulfi’s heart and she sprinted from there.

Sikander wished to follow her but Amyra held his hand. To her surprise, he broke away and went after Kulfi. He comforted Kulfi in his arms. Amyra got aggravated but Sikander stopped her.

He warned both of them to stop fighting or else he would leave. He told Amyra that he wished to complete her dream but he needed her support. She agreed. He started rehearsing. Amyra lost rhythm several times and got frustrated. She threw water on Kulfi which angered Sikander.

Gunjan stated Kulfi would get the prasad first instead of Amyra. Lovely interrupted saying kids should not be differentiated. Gunjan states Amyra had no rights in this house as she was not the real daughter. Amyra enquired about what Gunjan said.

Mahinder warned them to not fight in front of the kids. Lovely tried to console Amyra whilst Mahinder console Kulfi. Amyra wanted to know the meaning of Najayas. She was shattered to learn the truth. Lovely assured her that she was still the daughter of Sikander Singh Gill. At school, Kulfi read her essay out loud on Family. Amyra asked her to take her father’s name and everyone got shocked to hear the truth.

Kulfi tells whole class her father is Sikander Singh Gill and says Amyra is my little sister and I love her, Amyra asks and how is he your dad, like my mom, is Lovely his wife, where is your mother, she didn’t marry my father, so you know right what I’m saying, Kulfi says my mom told me she did marry Sikander, Amyra says there are no proofs, class starts gossiping about kulfi and call her dirty girl.

Mahendra scolds lovely and Gunjan, Lovely says bhabhi you shouldn’t have done this to Amyra, Mohendar says we have to think about girl’s future and keep in mind Sikander shouldn’t learn about this. Amyra in lift keeps teasing kulfi and says go complaint to your baba that I insulated you. Sikander calls Amyra and kulfi close and sees kulfi crying and asks why are you crying.

Kulfi says I fell down, Sikander asks how, Sikander looks at Amyra and figures out Amyra has done wrong and asks you two fought, Sikander hugs Kulfi, and says all will be fine and calls Amyra close too and says you two freshen up we have launched today go. Amyra thinks I won’t allow kulfi to be Sikander Singh’s daughter nor my sister. Kulfi The Singing 3 December 2019 StarLife Update