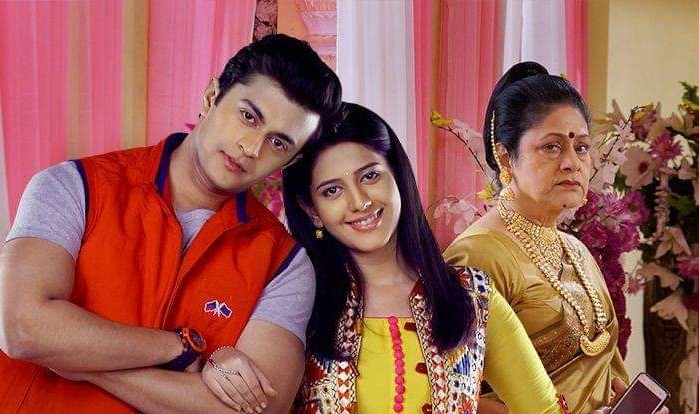 Lady Luck 30 December 2019 Update begins when Kaveri is calling Suman and informs that Latha asked her to bring turmeric milk as she is having cold. Latha asks why should she when there are servants. Kaveri says family should help each other as god stays in that house. Suman agrees and goes to kitchen. Kaveri enters kitchen and asks her to bring her pooja maala as she cannot go up. Suman leaves. She then opens gas, closes all the windows and then calls Latha. Latha comes.

Kaveri tells Suman was preparing turmeric milk for her, but she asked her to get maala, so she left milk in between and went upstairs to bring mala. Latha says she herself will prepare turmeric milk and gets into kitchen. Kaveri smirks thinking of a blast in kitchen.

Bhoomi passes by, smells gas, gets into kitchen and is shocked to see Latha trying to light on gas stove. She throws water on her and then opens all windows. She informs Latha that gas was on and she could smell it outside. Kaveri enters and says Suman left gas open. Suman comes in and asks Latha why did she come out when she has cold. Latha asks why did she let gas open. She says she did not.

Kaveri says she did and asks Latha to forgive Suman. Latha says she would have blasted house. suman starts fighting, latha leaves. Suman follows her and asks her to clear her allegations. Latha says she did mistake. Suman starts shouting loudly. Whole family gathers hearing her shout. Kaveri smirks and signals Pavitra that she sparked their fight.

Suman shouts that Latha makes big mistakes instead and she did not do any mistake. Latha starts crying. Agram takes her to their room. Inder asks Suman to get in. She yells and gets in. Kaveri taunts pointing at Vasundhara and leaves with Pavitra. Vasundhara asks Bhoomi why they were fighting. Bhoomi says Suman left gas open by mistake and Latha was could not smell it and light on gas by mistake. Vasundhara is shocked to hear that and even Ansh does.

Bhoomi brings turmeric milk for Latha. Ansh enters and asks Bhoomi if she wants to garner praises from mom. Latha says Bhoomi needs praises as she saved her life. Ansh says bhoomi is very good. He thanks her. Bhoomi says it is okay and asks him to go to their room as she has some work in kitchen. She then thinks Pavitra or Kaveri must have let gas open.

Pavitra sees Agram getting Vasundhara’s sign on cement contract file. She calls contractor and congratulates him. Suman starts yelling again. Latha and Suman’s fight starts again. Kaveri sees Pavitra sleeping in her room and asks why did she come, if anyone will see her, they will create problem. Pavitra says she has done her job and wait and watch till tomorrow

Ansh sees Bhoomi tensed and asks her reason. She says she Latha and Suman are not in talking terms and she wants them to normalize. Ansh says they both love chat, Latha likes Suman’s prepared aloo papdi chat and Suman likes Latha’s dahi papdi chat. Bhoomi prepares chat and gives it to Latha as Suman gave it and suman as latha gave it.

She silently walks out and waits in lawn. Suman comes out and says this cannot be Latha’s prepared chat as she can identify it by smell. Latha also comes out and says same. Bhoomi apologizes them and says she wants them both to patch up. Latha thanks her for taking care of Pavitra and even whole family so well and asks her to call everyone by their relationship.

Bhoomi says badi maa/vasundhara will not like it. Latha says she will not say anything. Suman thinks Vasundhara will fume and punish Bhoomi again. Pavitra and Kaveri hear their conversation, smirk and discuss soon their happiness will vanish.

In the morning, inspector comes home. Kaveri tells Pavitra to see her drama now. She starts shouting police has come and acts as getting afraid. Vasundhara comes down and asks why is he here. Inspector asks who is handling city bridge project.

She asks what happened. He says he has arrest warrant on that person. Kaveri starts acting as mad again and says she will not go with police. Suman calms her down. Inspector says PWD department raided construction site and found low quality material being used, so he wants to arrest the person responsible to interrogate. Inder yells at Agram that he warned him to check quality and then get bhabhi’s sign on agreement.

Vasundhara tells inspector she will speak to commissioner once, calls him and informs him about the situation. Commissioner orders inspector to give Vasundhara time till evening to sort out issues. Inspector leaves. Kaveri gets irked seeing her plan failing.

Agram and Inder start blaming each other and fighting. Vasundhara asks them to calm down as she will handle the situation and sends them to their rooms. Kaveri tells Pavitra she will see who will sacrifice this time. Bhoomi thinks Kaveri and Pavitra must be behind this. Ansh sees her tensed and asks reason. She keeps silent.

Lady Luck 30 December 2019 Update ends when Kaveri goes to ugly Suman’s room and brainwashes her that Agram did mistake, but will blame Inder. Maan in Inder and Latha’s room says he is confused when dad checked, cement was of good quality, then how did it change. Agram says even he is confused. Once Agram and Ansh leave, Kaveri enters and starts same drama that she is worried Agram will be made scapegoat and will be sacrificed.

Related Topics:Lady Luck
Up Next