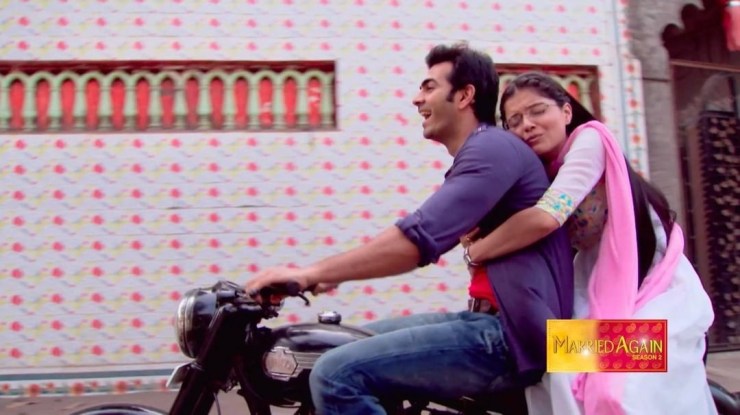 Married Again 3 December 2019 Update – As Divya struggles with the strap on her blouse, Raj helps her with it, while she looks at him longingly. When Divya says thank you, he tells that her Raj can’t do anything that would discomfort her, or put her to shame. He says that she’s looking very beautiful, and her fear has all the more reddened her cheeks. He says that like others he too has a gift for her, and gives her a pendant.

But when she refuses, he asks her what happened now as she used to be cribbing for gifts all the time earlier. raj reminds that she had said that she’s coming for him, then why can’t he take the gift. As Divya tries to say that she has to make an urgent call, raj brushes her aside and tells her to say the truth once and for all. Raj asks whats happening as whenever he tries to come close to her, she flinches away, and if there’s something that she’s hiding.

Divya finally unable to jerk him off says that he’s married. Raj says that he knew it before. And when the law also doesn’t approve of marriage not being consummated for 7 years, then why is she hesitant.

Meanwhile, the spot boy is looking around for Divya, as the chandelier can break anytime. Divya checks her messages and is aware of the status of the chandelier, and gets very tensed. Raj asks what is the matter now. As Divya and raj are locked in the same room, Divya is very angry. raj asks what is her problem. She says that she has to get out anyhow, as it’s very important for her to go out right now. as she tries on the lock, saying that she needs to talk to Murti right away.

Raj asks her to step aside and tries herself and says that it isnt working, as the door might be jammed. But divya doesnt sit in peace, and shatters the glass window, with a mantelpiece, and Raj immediately concerned for her, cups her head, and hugs her, concerned that she isn’t hurt.

All are surprised by the sound of glass shattering. Sarita, sees this from outside, through the broken window pane, and is distraught. Sohan and Kamla are reveling in the success of their plan, as its been 15 minutes and they havent come out.

Divya tries to tell her that the chandelier is about to break, but Sarita isn’t able to understand. But raj ducks Sarita out of the chandelier’s way in the nick moment. Sarita is overwhelmed to see this. Raj asks what happened, and if anything had happened to her, then he would have had to live with the guilt that he didn’t take proper care of her when she did so with him.

When Divya asks if she’s hurt, Shiela says that nothing can harm Sarita till Raj is with him. Granny says that its the duty of a husband to protect his wife. Raj leaves from there. Granny thanks the lord that Sarita is safe. Kamla blames her for this again and spoiling the function. She asks Sarita to clean it all up. Sarita, smiling at her experience, leaves.

Raj remembers the incident, and wonders that one second’s delay would have been fatal to Sarita, and remembers Divya’s prophecy, and wonders if it’s true after all, but then refuses to believe it. Raj wonders if the next 20 days, would be the last of Sarita’s life.

Sarita says to Divya, when she expresses at the danger in this plan, that only life must have gone, as if this would get her closer, she would do this willingly again and again. Sarita says that this is the most memorable day of her life, as she saw concern and fear in raj’s love. She goes on to profess her love. Divya says that she has lifetime ahead, and cant do this with her anymore. Married Again 3 December 2019 Update – Zee World

Divya says that they would come up with a different plan. But when she turns around, she finds sarita having slit her hand with a glass piece. While all are tensed, raj rushes upto her, and washes her hand in cold water, and sarita is overwhelmed to see his care. When he asks if she’s in pain, she denies, while raj attends to her wounds. Divya is in tears watching all this, thinking what length can sarita go for her love. Finally she looks away, happily.

As sarita and divya are talking in their room about their next course of action, they notice Raj’s fooststeps, and divya makes sarita hide in the room, She opens thew door, and Raj enters saying that he needs to talk. He asks her if she saw what happened, and that could have taken sarita’s life, and maybe the prophecy is true.

Divya says that he doesnt believe in this. Raj says that he doesnt but sometimes they arent left with any other option, but to believe it. Raj asks what has sarita seen in her life, as he has spoiled her life for 10 years, and that they have to do something. Divya tells Raj the story of Savitri who fought for her husband’s life, and that he too can do the same for his wife.

She tells raj to love sarita so much that destiny changes, and asks if he can manage this. raj says that he had told her that love can happen just once, and she has done it with him. divya says that love isnt a mistake, that it cant be done now. She reminds him that he himself has created characters, in dramas who start over. Raj says that he agrees, and if what she’s saying is true, then she should answer a question.

Raj asks divya that if love can happen again, then could she do it, or would she be able to do it again. Divya is speechless to hear this. Divya turns away saying that they arent talking about them. Raj says that this isnt her answer, and asks her the same question again, saying that if her answer is yes, then she agrees, and if its no, then the smartness that she’s trying to outwit him, isnt working.

Sarita listens to all this. He makes her swear and asks why she didnt love once again, and left Gaurav at the altar. She looks at him in the eye, and says that love can happen again, and she has seen in mumbai, such relations that start over. She says that after 10 years, a divorced couple gives each other a second chance. raj is confused and surprised at this answer. The screen freezes on Divya’s tensed face. Married Again 3 December 2019 Update

Related Topics:Married Again
Up Next