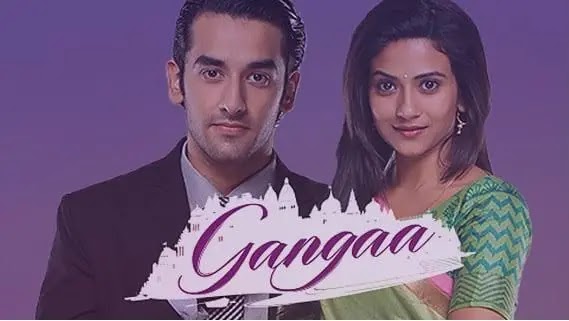 Gangaa 21 January 2020 Update on Zee World Shiv wonders how can Ganga go to meet Mishra Kaka, he was alone and Ganga wasn’t with him. He inquires if Mishra ji came to take Ganga, Savitri replies he sent someone else. Shiv says his talks didn’t suggest something, he gets alert that something is wrong.

Ganga was walking with the goons. Her foot slips and she spots a knife in driver’s hand, getting alert. The driver replies they need to take her life with it. Ganga was confused, the old man tells Ganga he is also helpless. Ganga tries to run away for life but the two men hold her. Shiv had come on his jeep looking for Ganga. He spots an empty van of their house and hears Ganga’s shouts for help. The men tortured and harassed Ganga.

Shiv runs for her help. He comes to fight the goons. Ganga comes to hug Shiv tightly, as she shivers and cries. Shiv calms her down, he asks if she recognizes them both. She denies. He takes her back home.At home, Riya wonders what could possibly happen had Shiv not reached there. Shiv says one of their servant was involved, they can no more trust their own people. Kushaal says they can’t even trust their household members at this age. Savitri sends Ganga to her room. Shiv shares with Savitri that Ganga lost her memory during the storm on the day of their wedding.

Everyone was shocked except Pratab and Savitri, Savitri asks if Shiv knew about it? Shiv says he didn’t share it with anyone because of their father’s death. Had Savitri known about it, she would never have let Ganga leave with an outsider? Savitri assures everyone would now be alert about Ganga. Kushaal thinks when Savitri is sweet, this suggests there is something wrong for sure.

Ganga sits up on bed in the evening. There was no water in the pot. She goes out to get water for herself and hears Pratab speaking on phone. He told the other person, he can’t come to receive loans anymore. Shiv considers himself God being Mathadesh, Shiv is step son and he is the real one; thus he should be on there as Mathadesh. They need to remove Shiv from this chair, he plans about stealing from Math’s money and blame Shiv. When the money will be lost, everyone would lose faith over Shiv. Shiv would take the blame over himself, and Pratab would be the next Mathadesh. He laughs hysterically, and plans a meet up with the other one tomorrow.

Ganga thinks Shiv is about to lose his life for Pratab, and Pratab thinks so false for him. She hides herself as Pratab leaves, then asks Jhumki about Shiv’s whereabouts. Jhumki says Shiv has gone to Math. Ganga thinks about going to Math, in order to give him lunch.

On the way, Savitri asks Ganga what is this lunch for. Dai Maa comes there and says she had given the lunch box to Shiv. Ganga says alright then, she didn’t know about it. She walks inside.

At night, Ganga was restlessly waiting for Shiv. Dai Maa comes to inform Ganga that Shiv would stay at Math tonight, there is a lot to arrange. Ganga was worried, and asks for Shiv’s mobile number. Ganga dials the number but it was switched off.

The next morning, she hears Shiv return. She comes out to speak to him, but Pratab comes there. Shiv asks Ganga what’s so important, Ganga says nothing important and goes to get something from kitchen. Pratab assures Shiv that he would take care of Math’s work, as Shiv has important chore at bank. Shiv says he needs to do some important chores at Math. Later, Ganga asks Dai Maa about Math’s contact number.

Ganga receives a call from Radhika’s school, Radhika has a fight with a girl. Ganga assures to be there soon. In the school, Ganga defended Radhika. The other student’s mother blamed Radhika. Ganga says she can prove the other girl is lying. Shiv also reach the school.

Ganga asks the girl how she got nail marks on her face if it’s Radhika who hit her. The girl apologizes the teacher, saying Radhika only teases her. The principal apologizes Ganga and family, then tells Radhika to be lucky that her mother believed in her. Radhika hugs Ganga and leaves holding her hand tightly. Shiv smiles happily watching Ganga.

Outside, Ganga asks Shiv to speak to him. She watches Savitri and Pratab standing behind, then leaving then behind takes Shiv away. Savitri comes there and says since yesterday Ganga wants to speak to Shiv that she is no lesser than Parvati for not being given fair responsibilities. Shiv convince Ganga that she is new to family, she is unaware of all the arrangements that are needed. Pratab sends Shiv towards village, and taking locker’s keys go to Math. Ganga was worried.

At home, Ganga was worried that Pratab is alone at Math and would easily work there. She thinks about catching him red handed; and leaves through the window. In the Math, Muneem ji wasn’t ready to let an outsider inside. Ganga reveals her face, then asks to see the locker right now. Muneem ji takes her inside. Ganga finds the locker empty.

Shiv was distributing clothes among the villagers, Ganga came there and insists on meeting Shiv. Shiv comes to Ganga and asks what it is about. Ganga says it’s really important else she hadn’t interfered in his work. He takes her aside. Ganga says there is no money in Math’s locker, and Pratab is responsible about it. She had already found about Pratab’s intention, he wanted to accuse Shiv for stealing all the money. Shiv was sure his brother can’t do this.

Ganga says Pratab himself wants to be MathaDesh. Ganga asks Shiv to come to the venue Pratab must have gone to meet his mate. Shiv wasn’t ready to leave with Ganga as he completely trust Pratab. Ganga says if not him, he must come for her. She realizes she is a burden for Shiv, but at least she has been living with him and his family and if she has ever done him any favor he needs to come along right now. Shiv comes along Ganga.

At the venue, Ganga comes to Pratab and says he can’t leave so easily by emptying the locker. She spots a bag and says Shiv knows this bag contains the money. Pratab doesn’t understand. Ganga asks Shiv to open the bag, it must contain all the money of locker. Ganga goes to open the bag, it contained an idol. Pratab smirks watching Shiv and Ganga. Ganga was taken aback. Another jeep arrive at the venue with the whole family. Savitri tells Shiv that Pratab called them here as he wanted them to place the idol as a surprise for Shiv.

Pratab poses innocent, saying he can never betray his brother. He got the old locker emptied by himself, and bought an electronic locker for Math. Everyone was silent. Ganga still insists she heard Pratab talking on phone against Shiv. He called Shiv as step. Savitri says they were giving much respect to Ganga and she has been trying to part their family away. She says these brothers love each other dearly, and she is trying to poison their relation.

She says Ganga is not worth their daughter in law, or Shiv’s wife. Shiv also stared towards Ganga angrily, then says Ganga is not from their family but his wife. He joins his hands to Savitri in apology, it was his mistake to follow Pratab this way. Ganga tries to follow him, he denies hearing a single word. He has promised not to insult her, she must also remain silent. He leaves the place.

Gangaa 21 January 2020 Update ends as Savitri sends the family in car, then comes to Ganga saying she wants to throw Ganga out of the house. They are bearing her only because of her husband, then says she did well by proving Radhika as innocent; but she must think well before trying to prove Pratab wrong the next time. Ganga calls on them to stop, then asks how she came to know how Shiv got ready to come here. Savitri and Pratab were silent.