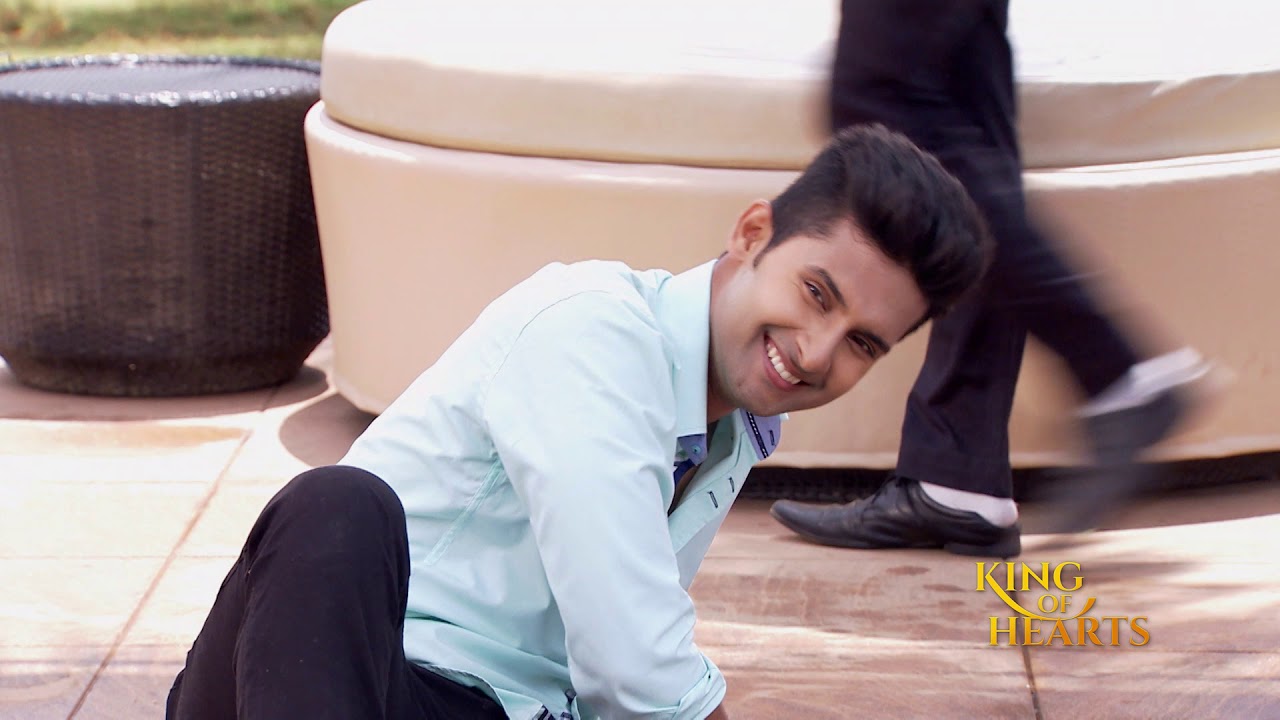 King of hearts 17 January 2020 Friday Update – The Episode starts with Payal telling Mahi that she made Nagma’s understand for family’s respect, but she has a condition. She says Nagma asked us to send Satya to mental hospital by 9 am. Mahi says we can’t send him to mental hospital and says Satya is not mad, and has lost his memory.

Payal says we have to agree, else family’s reputation will be ruined. She says mental hospital people will come tomorrow at 9 pm and will take Satya. Mahi says I will talk to Nagma and goes. Payal tells Satya that it is called check and mate, and says what did you think that you will be saved if become a child. She says child or an animal, nobody can be saved from Payal Sen Gupta.

Satya asks her to change her conspiracy moves and says I came to know about your plan when that fake nurse came here. Payal says good and asks him to do what he can, and says you have 9 hours left and asks him to decide if he wants to go to mental hospital or police station.

Satya says so much can happen in 9 hours, and says even govt can change. He says lets see who will win and who will keep her head down. He comes to Nagma’s room and hears her talking on phone, and asking someone to tell clients that she is busy for 3-4 days. Satya thinks what is her business and clients. He thinks he don’t have much time to enquire, and goes.

Mahi covers blanket on Satya as he sleeps. She takes off his specs and looks at him with tears in her eyes. He thinks even Kajal can’t do anything before morning. Mahi thinks Satya haven’t done anything wrong and asks God to help him. Satya thinks he has to stay in the house to protect mahi. He thinks he is going to do something because of which, either he will stay back or have to leave from here.

Mahi recalls the good moments between them. Pal Bhar theher jawo plays……………She looks at Satya. Satya also looks at her…He sees her sleeping and goes to Nagma’s room. He sees her sleeping and is about to take her phone, but just then she turns and keeps hand on his hand. Satya is tensed, but manages to take the phone. He sees phone locked and opens it with her finger print impression.

Next morning, Payal tells Mahi that they can’t keep Satya at home and if Nagma goes to Police then Naina will feel insulted too. Mahi says Satya is not listening to me since he has woken up. Naina asks where is he? Mahi says he is in cupboard. Payal opens the cupboard and calls him Satya baby asking to come out. She asks Mahi to take him out and says mental hospital people will come. She thinks he will leave soon. Mahi asks Satya to come out. Satya says I will not go, I haven’t done anything wrong. Mahi says please. She asks sits in the cupboard and asks him to understand. She promises to bring him back once he gets fine. Satya says you want me to go. Mahi nods no, but if you will get fine then I want you to go. Pal Bhar song plays again. Satya holds her hand and comes out. He looks at Payal and the doctor.

Payal signs the doctor. Satya says I don’t want to go with uncle…and runs in the house. Payal asks Doctor to give him injection. Satya throws things on the doctor and wardboys. Payal asks Doctor to catch him. Naina laughs. Doctor is about to give him injection. Nagma comes and asks him to stop it. She says I want to say that this boy hasn’t done any mistake yesterday. It was all my mistake. Mahi slaps her and asks don’t you have shame to blame her. Nagma says I was helpless to do this and says her mum is in hospital and she needs money. Payal asks her to get out and tells we were about to send Satya to mental hospital because of you. Mahi says I want to know who asked you to do this.

Nagma says she has done this on Shom’s orders. Payal is shocked. A Fb is shown, Shom asks her trap Satya and offers money. She agrees. Fb ends. Mahi tells her that she can understand her helpless as she knows the pain of losing her parents. She gives her money and asks her not to play with anyone’s life again.

Payal says may be Shom was helpless. Mahi asks what? This is disgusting. She says he got your love and values and became this kind of a person. She apologizes to Satya and says this all had happened because of me. I knew Satya can’t do this, and then also…..She apologizes to him and says I will compensate for this and will make cake for Satya. Satya says okay and thanks him. Payal thinks she will conspire again.

Mahi apologize to Satya and says I knew you can’t do this and apologizes. She says she will compensate for this. Satya tells Payal that this is called nehle pe dehla/tit for tat. He recalls checking Nagma’s contacts, and sending some pics to someone. She gets a call from someone asking her why she has sent photos to him, and threatened to blackmail him. She sees Satya there.

King of Hearts 17 January 2020 Friday Update  Satya asks her to do as he said, else he has her photos. Fb ends. Satya tells Payal that he will go and take rest now, as his sasumummy makes him tired. Mahi apologizes to Satya. Satya says now I am relieved, now no bad aunty can separate Sattu and Mahi. Satya thinks to tell the truth to Mahi today itself and thinks to the end his Sattu act. Payal calls someone and tells Shom that Nagma double crossed them and ruined her plan. Satya comes there. Payal says I will ruin that girl. Shom says she has left now, what we can do. Payal says why don’t you understand Shom. Satya comes and asks her to search Nagma. He says you can get even God if searched and asks her to go and search Nagma, says his blessings are with her. Payal says I won’t leave you.

Satya meets Kajal and tells her that Mahi’s behavior is changed and now he thinks she is falling in love with him. Mahi tells Naina that she is growing feelings in her heart for Satya. Kajal asks if she will forgive you knowing about your Sattu act. Mahi says I don’t understand, if I am in love with Satya or Sattu. Naina looks on. Mahi says both persons are same. If I am doing wrong. Naina asks her to ask her heart and know.

Satya says he can’t bear anymore now, and wants to tell everything to Mahi, and that he is doing this childish act to protect her. He says he has burden on his heart. Mahi recalls the moments spent with him…Tu Aata Jab Seene Me plays…………She turns to Naina and asks if this is love? Naina laughs and nods. Mahi laughs and dances happily. Kajal asks why she will agree without any proofs. Mahi asks if Satya will accept? Satya says I will manage and know that she won’t agree with seeing proofs. Naina tells Mahi that he have to agree. Mahi hugs her.

Payal asks Mahi, why she is blushing and asks if she is hiding something from her. Mahi says you might feel that I am mad, and says I think I love Satya. She says I love him…I love Satya. Payal is shocked. Mahi says I know that you are in a state of shock and asks for her help. She says she wants to express love to Satya and says I love him…She hugs her and goes. Satya comes back and sees Mahi leaving somewhere. He thinks this is the right time.

He comes to meet Nagma and asks her to call Shom. Nagma calls Shom and apologizes to him, says Satya blackmailed her and that’s why she couldn’t do anything. Nagma asks for a chance. Shom says okay and asks her to meet him. Satya asks her to earn more in acting. He thanks her, and says sasu mummy…time is up, game is over. He thinks to expose Payal and end Sattu’s act.

Later he packs his clothes and thinks now he don’t want to take help of lie, thinks where is Mahi? I want to tell her truth. Servant comes and says Mahi is calling you to garden. He goes out and sees garden area decorated, and Mahi loves Sattu written with their pics hanging…He gets emotional and happy. He sees cake kept there…and sees I love you Sattu written on it. He gets happy and looks for Mahi. Then he sees someone standing inside the curtains. He thinks she is Mahi.

Satya tells that he wants to tell her by his heart….and says I love you Mahi and can do anything for you. He says that’s why I did lie with you. He sees Nagma coming out from curtain and is shocked. He asks what you are doing here. Mahi turns him towards her, and slaps him.

King of Hearts 17 January 2020 ends when Satya is shocked and asks Mahi? What is all this? Mahi says it is a betrayal which you have done to me since marriage day. Satya says these arrangements wasn’t done by him. Mahi blames him and says you have betrayed me and made me have feelings for you. She tells that these feelings have no use which grows from betrayal. She says you have plan everything carefully and made place for yourself in my heart. She says she will kick him out of her life in one day.