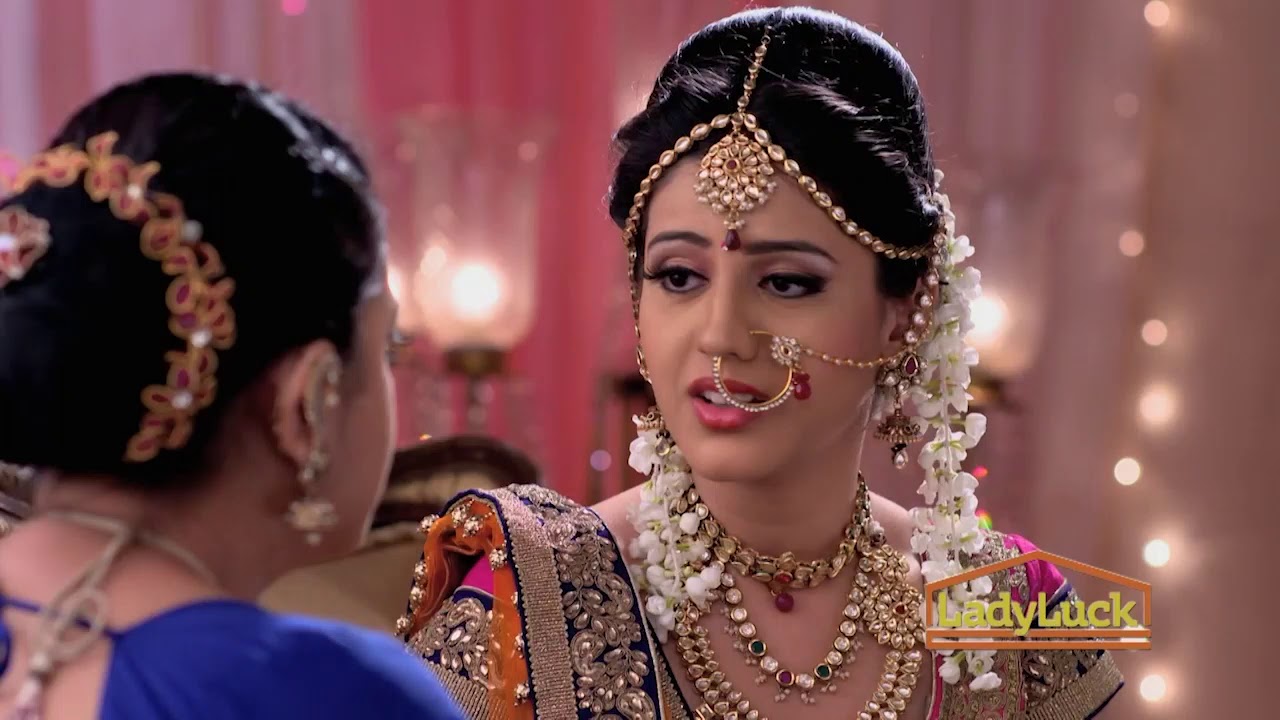 Lady Luck 2 January 2020 Update on Zee World – A lady enters Prajapati house and rings door bell repeatedly. Whole family wakes up hearing bell and come out. Pavitra runs and hugs her and they both laugh. Suman asks who is she. Pavitra says she is Minty, bhojpuri film industry’s mallika sherawath.

Suman asks why did she come here. Pavitra says she has some work in Bhopal, so she will be staying with her until then. Agram asks if she did not find any hotel. Pavitra says why should she stay in hotel when her friend is here and says she gave her shelter when her mother vandalized her, pointing at Vasundhara.

Kaveri starts her drama and says they allow anyone to stay in their house and says giving shelter is a big charity. Pavitra takes Minty to her room. On the way Minty introduces herself to Ansh. He says hi and then asks Bhoomi to prepare him breakfast while he gets ready for office.

Latha enters with another glass. Kaveri starts mad acting as panicking and says jailer wants to kill her for giving her milk. She silently adds tablet in milk and leaves. Latha gives Vasundhara milk and she drinks it. Kaveri smirks thinking Vasundhara will start drama after drinking milk.

Ansh comes to his room and asks servant to ask bhoomi to serve him breakfast. He sees Minty coming out of his bathroom and asks why is she here. She purposefully slips and he holds her. Bhoomi enters with breakfast and is shocked to see them in intimate position. Pavitra also enters, smirks, and asks Minty why is she in her brother’s arms.

Minty says her brother saved her from falling and praises Ansh’s strong muscles. Pavitra asks why did she come here. Minty says her room geyser was off, so she came here and had bath. She says Ansh she did not know it is his room, but he knows it is his room and entered.

Ansh says Bhoomi that he was busy and did not know she is here. Bhoomi angrily keeps breakfast and says she trusts him and asks Pavitra to get her friend dressed and take her out from here. Once she leaves, Minty says Bhoomi is very intelligent and failed her plan. Pavitra asks her to get ready and see her new dhamaka.

Ansh tells Bhoomi he did not know Minty was in his room. Bhoomi says Minty does not seem good and warns him against her. Ansh nods yes. Ansh gets ready for office. Pavitra sees him leaving and starts acting with minty that minty does not know Bhopal roads. Minty says yes. She says her brother Ansh will drop her to her destiny. Ansh says he cannot as he has some important meeting.

Latha asks Ansh to drop Pavitra. Bhoomi hears Latha’s requests and asks Ansh to drop Minty as she is their guest. Ansh agrees and takes Minty in his car. Pavitra tells DDLJ dialogue jaa simran jeele apni zindagi. Minty winks at her and leaves. Pavitra then goes and informs Kaveri that Minty will do her work now.

While traveling, Minty asks Ansh to play music. He plays FM and meri desi…song..plays. Minty starts dancing sensuously. Ansh switches of FM and asks where she wants to go. She says she does not know place, but knows route and asks him to continue driving.

Suman comes to kitchen, yells at servant that he is not doing his work properly and says she will come back and prepare breakfast. Latha enters kitchen and adds salt in batter. Suman enters and starts yelling that she should kill them directly at once instead of killing everyday. Latha asks what did she do. Suman asks why is she adding amchur powder in batter. Latha says she was adding salt. They both start fighting. Vasundhara enters kitchen hearing their fight and asks them both to sort out their issues. She asks them to tell Inder and Agram that she wll meet them in office in the evening and walks out.

Kaveri sees Vasundhara walking out of house and asks Pavitra to wait and watch drama now. Vasundhara gets drowsy due to Kaveri’s tablet effect and starts limping. She imagines car speeding towards her and shouts. Bhoomi who is nearby holds her on time and takes her to her room. Vasundhara falls on floor unconscious. Bhoomi thinks something is wrong, reminisces Minty going with ansh, and calls him, but he does not pick her call.

Lady Luck 2 January 2020 Update ends when Minty takes Ansh to a secluded building and says her office is here. Ansh says he will leave now as he has meeting. She asks him to wait until her producer comes. He agrees and follows her. Once they enter producer’s office, Minty locks door from inside. He asks what is she doing. She asks him to wait and watch, starts tearing her clothes and shouts to save her. Police van reaches the spot.

Related Topics:Lady Luck
Up Next