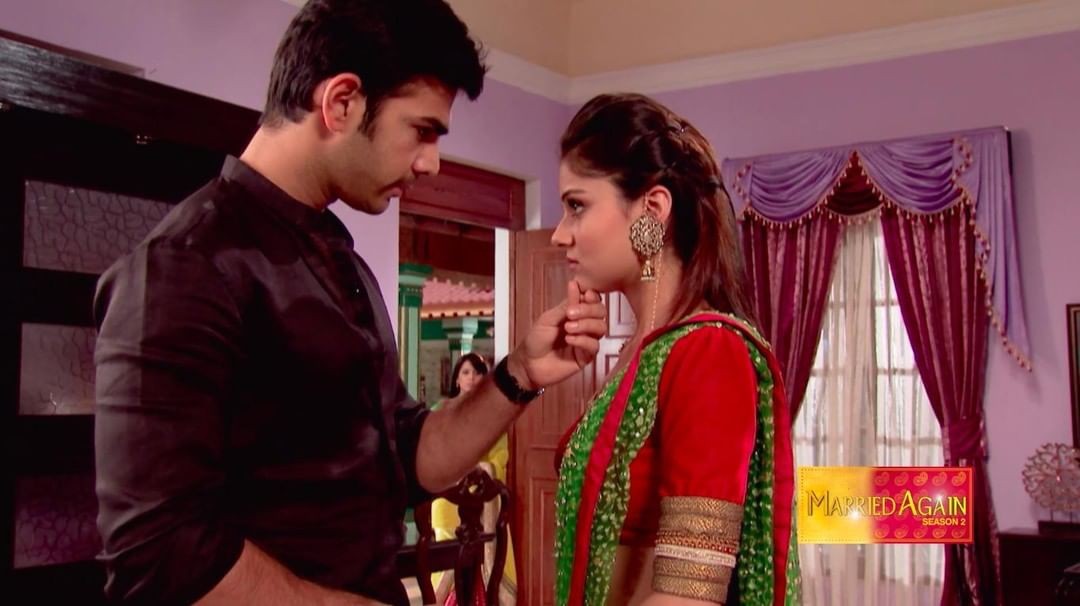 Married Again 8 January 2020 Update on Zee World Sarita eats the food, despite it being full of chilli, even as tears keep flowing down her cheeks, and she starts coughing. As she gasps for breath, and wants some water at the earliest, and abhi goes to get sugar from the butler, he asks why’s she doing this, and what does she want from them. He asks what should he do with her.

Vikrant asks her not to think that she has defeated her by eating this. Sarita frantically gasps for breath and her mouth is burning, but Vikrant says that she has strengthened his doubts regarding her and proved that she’s trying to hid eher relationship with raj. Abhi returns with sugar, and she takes it hurriedly. She drinks water, when abhi gives it to her. Vikrant is tensed. Sarita leaves and excuses herself for 5 minutes. In the lobby, Raj finds sarita going, and thinks that this is his chance. He goes aftee her.

Abhi reprimands vikrant for being angry at sarita, and asks him to go and apologise to mumma, and get her back, or else he wont eat anything. Vikrant agrees and leaves. abhi smiles. As sarita gets in the lift and is about to close, raj stops and gets inside, and before sarita can get out, its too late. Vikrant is tensed, while divya too is worried as to where is raj going in such a hurry.

Sarita asks him to let go. Raj asks where, to vikrant, and why does she want to go to him, and if she loves him. she says yes defiantly. Raj stops the lift and says that she may have tried to hide it, but he knows everything, as shiela has told everything, about her sacrifice.

Sarita says that she hasnt done anything like that. but raj explains everything what he knows. He opens up her secrets and asks where did she get the sacrfice from, due to her love, that she has with him, and that he was a fool to think about her otherwise. sarita says that what has happened is done. Raj says that they can still salvage, as they love each other, and forgetting the past, they can start over.

Sarita says that this cant be done, as this is punar Vivah, and every ritual is true and she cant insult it. Raj asks her to stop it, as its enough, and that they shopuld live together, for their love, and with love. Raj asks what kind of a relationship is this, as they have seperate rooms. sarita reminds the similarity to their relationship. Raj asks whats the point. She says that she wont understand, as he has come with divy and is following her.

Sarita accepts her sacrifice, but now she doesnt belong to him. She asks him to start a new life with divya, and not betray her. She tells him not to repeat the same mistake. She asks him whats he doing, and that now four lives are at stake. raj reminds her of the fakeness of their relation. She again argues on the same thing. raj is frustrated. then raj remembers a party, and asks her to kiss vikrant infront of everyone, at that party, to prove that she one with virkant, ion terms of body, mind and soul, and if she cant do that, then he would assume, that she is still his all along.

He says that she has uptil tomorrow, as it would decide raj asks her to accept that they love each other, and everything;’s fair in this. But sarita surprises him by saying, that she accepts his challenge, but if she wins, then he would forget her and accept divya in his life. raj agrees but says that he knows that his chotu cant love anyone else, as she only loves him. sarita is surprised and tensed too.

Downstairs, abhi and divya are chatting, when he says tht they were enjoying, but when she and raj came, everything was spoiled.

Outside, vikrant is frustrated when the manager tells him that its locked from inside, and would open only when its done from inside. Vikrant thinks that sarita has made a drama out of this, and that today he would catch her red handed. he asks the manager of the alternate lift to the sixteenth floor. he takes it, and comes out.

Raj too opens the lift, and gets otu, asking if she isnt coming. But she says that her way is different now. She gets back in the lift and goes for number 6 floor. Meanwhile vikrant doesnt see sarita or raj, and remembers about abhi and goes downstairs. he finds abhi with divya. He is tensed, while abhi explains his friendship with divya.

Abhi asks about sarita. Divya too is tensed. He asks abhi to come along. As they leave, divya thinks that she wont let have raj have his way, and that why did he come to the hotel where sarita is spending her honeymoon. she thinks that there’s somethingSarita sees vikrant and is tensed, while he eyes her and raj angrily. Married Again 8 January 2020 Update on Zee World

Divya confronts raj, in their room with questions, that have been bothering her, as to whats her importance in his life, and why did he get engaged, why is he running away from her, if he still loves her, and why’s he playing hide and seek with her. raj asks time till tomorrow as everything would be clear tomorrow, and she would get her answers to every questions. He leaves, while divya is tensed.

In sarita’s room, Abhi and vikrant come. abhi husg her and asks where had she gone. sarita says that she thought that he was with his father. she is chatting happily with abhi, when vikrant comes in and slowly the smile on her face tht was with abhi, vanishes as she finds herself being scrutinised by virkant’s steely gaze. He tells her how divya took care of her when she was gone.

Sarita says that they shoudl wash away the chocolate on his face. He happily gets on her piggyback and goes. Vikrant remembers sarita and raj together, and wonders why are sarita and raj giving such a huge vbetrayal to them.

While putting abhi to sleep, sarita remembers raj’s challenge and is upset. A doorbell ringing, tenses her that its vikrant, but when div ya calls, she wonders whats wrong, that she’s here at this time of the hour. As sarita opens the door, divya apologises for coming so late and that she is very tensed and needed to talk. Divya tells what abhi commented.

Sarita thinka that what abhi has understood, that divya and vikrant also would have understood. Sarita says that abhi is just a child and wants to see his parents together all the time. Divya says that there’s a strange feeling. sarita asks what. divya thinks about raj’s behaviour lately. She discusses it with sarita and says that there’s no love between them, and that they live like strangers in the same room. sarita asks her not to think like that. Divya says that raj got engaged just to show off. Sarita is tensed wondering about divya’s doubts and how she feels she is disconnected to raj these days.

Sarita asks her to have faith in her love, and not give up. Divya says that she would give one last try before giving up, just due to her. Divya leaves, while sarita is tensed.

The next morning, as vikrant begins to get ready, abhi tells sarita about the particuloar suit that he’s searching for. Abhi tells sarita that suit that he wants and that it would make them friends once again. When sarita gets back the suit and asks vikrant if he was searching for this one, Vikrnat asks how did it get here, sarita says that she remembered hence she kept.

Vikrant resignedly takes it. As he leaves, Sarita says that they are still very awkward with each other, and wonders how would she win the challenge. As vikrant gets ready, and sarita tensedly watches him, abhi asks for water, while she’s serving him breakfast. Sarita is still watching over vikrant get ready. Abhi says that he’s had enough. She asks him to go and wash his hand. After abhi leaves, sarita is asked whats she staring at, but she denies saying that she was looking at the painting.

Vikrant says that she’s lying to her all the time. Vikranty asks abhi how’s he looking. Abhi compliments him and wishes him luck for his imp meeting. Abhi kisses him, and then asks sarita to wish him too. Sarita is tened, while vikrant says that he doesnt need it. Abhi is insistent. Sarita extends her hand, and he too takes it, while she wishes him best of luck. Vikrant leaves, while sarita thinks that they are so awkward to hold hands, how would they manage to kiss.

While raj is ignoring kamla’s call, divya asks him to talk to her once. raj says that she must have definitely complained to her that he isnt taking care of her. Divya retaliates saying that she isnt forced to be with him, but that she came here willingly. Divya sees the tickest for the party tonight. Raj is given the tickets to couples night tonight. Raj thanks and says that he thought she would still be angry with him, for last night. Divya says that she’s still angry but wants to give her faith and her love one more chance. As divya leaves, raj says that tonight they shall know whose faith wins.

Abhi and sarita are playing in the room, when vikrant comes inside, and is hit by a ball, which scares sarita and vikrant. Abhi goes to get ice for his father, while vikrant is angry, and sarita tries to cool his eye down. Sarita is hurt while vikrant says that all of her relation is a farce only. He again reminds her of the last night with raj. Sarita thinks that she has to win this challenge somehow, so tht four lives arent spoiled. Sarita retaliates back in the same way that vikrant did. He is confused, while abhi gets back with ice pack and asks about how’s he feeling now. Vikrant says that they have finished their work, and that they would leave for bhopal tomorrow. Abhi says that then they would have to be together, as he wouldnt have time for them in bhopal. Sarita is tensed, while vikrant agrees to abhi’s wish.

Shiela is still lost in thoghts about rohan, kamla comes in telling her that they have found a suitable groom for her, from far away, so that he wont know of her pasts. But shiela retaliates saying that she doesnt want to get married, and that kamla can get her other daughters married. kamal is angry that she cant get her other daughters married, until the elder one is married. Shiela tries to protest, but kamla asks her not to be egoist. Shiela is defiant tht she would teach rohan such a lesson, so that he or others like him would think twice before spoiling one ‘s life. Kamla is tensed.

Raj, with divya is waiting anxiously for sarita’s arrival with her family. Divya asks raj that sarita looks in tension. Raj looks at her and says that they would know soon. Abhi asks them to dance. Vikrant awkwardly extends his hand, which sarita accepts. As sarita and vikrant dance, Raj has his drinks and watches them tensedly and divya is tensed to watch raj.

Married Again 8 January 2020 Update ends as Sarita is tensed to see raj distressed, but vikrant diverts her attention, by getting her in a romantic dance mode. Divya asks raj why’s he drinking again. As they complete, all clap, while raj looks on in anticipation..

Related Topics:Married Again
Up Next