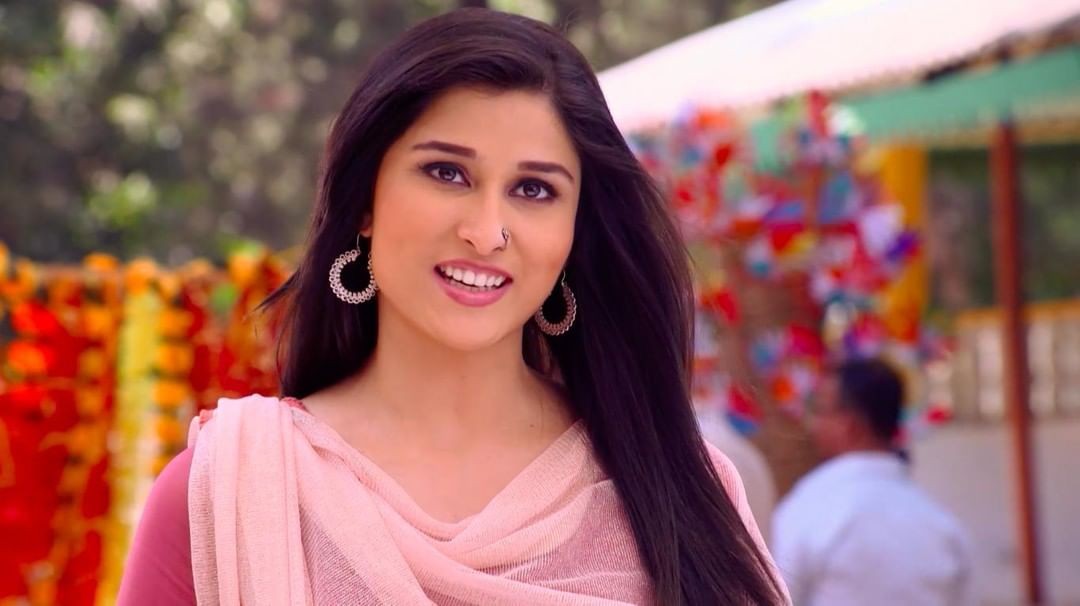 Deception 3 February 2020 Update On Zee World Satish assures Pooja that he can’t punish Naren for Rahul doings, and tells her to assure Naren that he will find his answers surely. Pooja gets happy. She asks him to give gift to Kusum of her choice.

Kusum tells Sushma that she wants to get Pooja married and asks her to call everyone to the function and says whoever likes Pooja, I will get her married to him. Naren is tensed.

Pooja tells Naren that Mama ji told that he will find the God and said that God may be found tomorrow. She asks him to see the logic and tells the probabilities. Naren thinks how can this happen. Pooja asks him to see from her perspective. Kusum thinks tomorrow guys will bid for you and asks her to laugh today.

She comes to Pooja and gives her dress, and says that she called Parlour lady also. Pooja thanks her. Kusum thinks once she marries, then her life will be fine. Naren looks for Pooja and says he is hungry.

Pooja shows her mehendi and asks him to eat and says she will eat later. Naren asks her to sit and makes her have food. Pooja is touched. Jogiya song plays….Naren says you said that God can found in the marriage and its rituals, but how is this possible and says God is found in freedom. He says function will be good, but God couldn’t be found. Pooja tells him that people get marry infront of them. Naren asks do you want to marry. Pooja says I will make you meet God and asks him to be with her.

Supriya tells Neelima that Harsha is in her room. Neelima tells that she will not convince her and says Harsha thinks of herself as their saas and thinks Naren as her property. Anuj brings the stuff for Kusum and Satish’s remarriage. Sushma wishes Kusum and says many guys will be coming today to see her and says someone will like her.

Pooja comes and gives something to Pandit ji. Sushma sees Naren with her and asks what you will say if they see Naren. Kusum thinks what to do. Naren serves drinks to guests. Harsha is crying. Rakesh tries to pacify her. Supriya comes to convince Harsha and says Akhand paat will be incomplete without her. Harsha says when mum is there, why bua is needed. Supriya says she will come again to take her.

Kusum asks Anuj to send Naren from here and says if anyone ask, what we will say. He takes Naren to side and asks him to go and not to spoil his parents’ anniversary. Pooja comes and tells that Naren is our guest and will be part of the function. She holds his hand asking her to come. Kusum comes and asks them to stop it and says if she sees Naren near the mandap then she will not sit in the mandap. Deception 3 February 2020 Update

Naren tells Pooja that Satish and Kusum’s happiness matters a lot today and says he will stay out. Rakesh asks Rahul about the amounts debited from the accounts. Rahul says Taya ji signed on those cheques and shows the authority letter. He tells Hardik that Harish is blindfolded and people are saying that he took sanyas route while trying to stop his son from following sanyas.

Naren thinks how I will reach my answer sitting here. Pooja goes to kitchen and thinks what to do so that he gets the answers. She thinks about Satish’s words. Naren tries to peep inside through the window. Anuj asks Pooja to make him understand. Kusum sits on mandap. Pooja brings garlands and tells Naren that they are relations, and says these things join relations between two people. Naren says it is lifeless things. Pooja looks at him through the garland

Naren asking Pooja what is this. Pooja shows the garland and says it is relation. She says there must be God in it and that’s why heads are bend down while wearing garland. Naren says it is just flower and thread. Pooja asks him to see from her perspective. Satish and Kusum are getting married inside the house. Pooja ties the ghatbandhan and tells Naren that this knot ties two people for life. She demonstrates rounds and tells that God exist in this also. Naren says it is just two people taking rounds.

Pooja says they are one in God’s eyes. Satish and Kusum take rounds. Pooja shows sindoor and says this is God’s biggest proof. Naren says it is just red color and tells that God have to come out today. Kusum asks Satish to give her gift.

Naren takes a pinch of sindoor and is about to fill pooja’s maang. Pooja stops him and slaps him hard, sindoor falls down. She asks what you are doing? She says it is just red color for you, but others don’t think this way. Naren says Pooja. Pooja goes and washes her face to remove the sindoor and cries. Naren calls her. She cries and goes inside. Naren looks at ghatbandhan and thinks if Sindoor is God’s prateik then what is wrong in it.

Supriya asks Harish, did you call me. Harish says Guru maa made me see the dream in where Naren got better and started becoming good soon. Guru ji asks Supriya to get blind folded. Supriya says it is wife’s duty to bring her husband back to light. Harish gets angry. Guru ji asks him to calm down.

Pooja walks inside the house. Kusum thinks what happened to her and where is her other dupatta. Rachel thinks to ask her. Naren comes to Pooja holding her dupatta and keeps it. He observes the ladies and goes. Rahul gives cheque to Guru ji and says it is second installment. He says he has a doubt and says I think Naren will win this challenge.

Pooja thinks of her words and recalls everything. Naren comes to her and says I know you are very upset, but listen to me. He says I was just trying to find God and reach my answer. Pooja says you care for your answer and not for others’ emotions. Naren says I didn’t think that you have different thinking. Deception 3 February 2020 Update On Zee World

Pooja says there shall be limits to friendship too and tells that there is something in the rituals too. Naren says I will go in the morning and don’t want to find God, whose search makes anybody cry. Pooja cries hearing him. He gets Supriya’s call and she asks how are you? Naren asks why sindoor is so meaningful to girl and asks if a guy fills a girl’s forehead with sindoor, then do marriage happens.

Supriya tells that filling girl’s forehead is to support her and be with her all life. She says girls’ emotions are attached with this and they are bonded by a relation. Naren ends the call and looks on. Supriya prays for his safety. Kusum talks to Sushma and asks if someone liked her. Sushma says someone liked her, but they are old fashioned and want bahus to wear ghunghat and don’t let them work. Kusum says ok and says she will convince Satish and Anuj and asks her to send sweets with them. Naren hurts him holding the thorn.