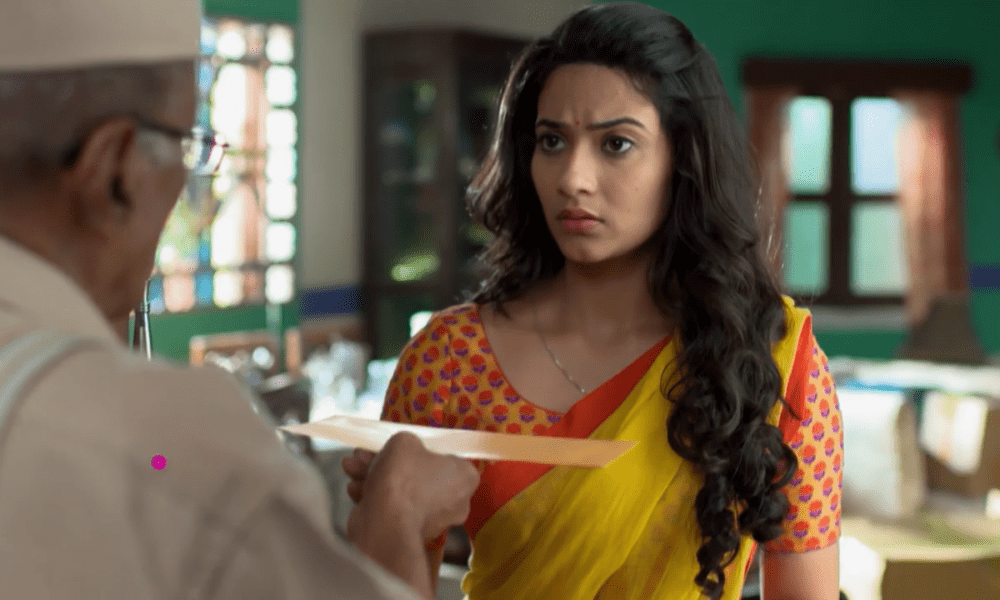 Gangaa 17 February 2020 Update starts as Ganga takes off her jewelry and rubs the sindoor off her hairline. She notices the bangles which Shiv gifted her and throw them away. Aashi comes into her room and thanks Ganga for her help, she says her in laws really appreciated Ganga.

Ganga asks Aashi if she is happy. Aashi questions where her happiness have gone, she shares her worry about the difference between her and Shiv. Shiv enters the room. Ganga says the one who taught her meaning of true love is different from the Ganga standing in front of her today. Aashi watches Shiv and leaves. Shiv notices Ganga’s hands bleeding and hurries out to get medicine for her. She jerks his hand away. He pushes her over the chair and applies the herbal ointment over it.

Ganga says Shiv would never be able to treat her injured heart. Shiv silently applies the medicine watching Ganga cry in pain. She notices Shiv’s stare over herself. He leaves the room after bandaging her hands.

In the room, Shiv sat in dark holding a candle. He recalls Ganga’s concern about Krishna. He burns his hand with the flame of candle. Riya comes in concerned about him and goes to get medicine. Shiv says he would get some pain surely, as he has hidden a huge reality of someone’s life. He tells Riya he can’t die as he doesn’t want Ganga to turn widow, he is also hurt as he has hidden a huge reality of Ganga’s daughter from her.

Riya assures everything would get well, she brings the medicine for him. Shiv cries. Riya assures Shiv he would not share this truth with Ganga, but she asks till when he would hide the reality. Shiv tells her to go and sleep.

In the room, Jhumki hits Pratab. She takes him inside and asks Pratab what Shiv knows about Krishna that he isn’t sharing with Ganga. Pratab was about to tell her when Savitri comes there. She tells Jhumki to prepare for a visit to Aashi’s in laws tomorrow as they have to take Shagun there.

The next morning, Shiv was preparing medicine for a man. Kushal comes to him with a herbal ointment and insists on him to put it, else it would leave a mark. Shiv watches Ganga come there. Shiv says a few marks can never be erased. He watches Ganga slip with the bucket and go to hold her. She silently straightens up and goes to take her clothes.

Kushal asks Shiv for his hand to put the ointment over it, but gets a call and leave. A cloth piece fly to Shiv’s feet which he holds back to her. She doesn’t take it, Shiv stuffs it over the pile. Ganga walks inside thinking she hates the man who always enforces her into his will.

Jhumki comes to Ganga with Shagun thaal. She says Aashi’s in laws want her and Shiv to come to their place with Shagun. Ganga denies going anywhere with Shiv but Savitri asks if Ganga would always be selfish, won’t she do this for Aashi. Ganga agrees to go to Aashi. Jhumki was determined to make Ganga fell in their eyes by preparing false Shagun.

Shiv watches Ganga place the thaal into the car. He notices her empty hairline, hits his hand to make it bleed and fills her hairline with his blood, then covers her head with the Pallu. Ganga gets into the car.

At home, Savitri assures Aashi they are sensible enough not to create a drama in front of outsiders. Jhumki says they would soon find out how sensible they are. At Aashi’s in-laws, Dadi hits Shiv’s head with Ganga saying this is how couples are blessed. Dadi notices Shiv has fever, but Shiv makes up its hot outside. She prays for their companionship for ages. Shiv places a hand over Ganga’s shoulder, she fumes and stares at him. He takes his hand off

The grandma insists on Shiv to have sweet and asks Ganga to prepare plate for Shiv and herself. They come to fulfil the ritual. Ganga presents them with Shagun. Dadi was shocked and says there must have been silver thaal, and where coconut in it is. She was further shocked and complains she already told them to bring red or green saree, why they brought black one. Mummy complains there wasn’t any turmeric over the rice.

Shiv apologizes for the misunderstanding. Ganga says she prepared the thaal and kept whatever Savitri told her. She gets to feet of Dadi. Mummy was concerned and says they must rethink about this proposal, she replies Shiv to look for some other guy. Dadi asks her to forget about it.

Mummy asks what the guarantee it won’t happen again is. Shiv and Ganga promise her to take care from now on. Dadi conditions that everything must happen according to their traditions and someone from their family should go to Shiv’s place. She agrees to go with Shiv, Shiv welcomes her with a smile.

On the way back, Shiv gets dizzy. Ganga notices he had high fever. Dadi watches the bruise on his hand saying it has worsened and caused fever, they must first treat his bruise. Ganga holds Shiv out of the car and helps him sit near a tree. She rubs his feet and sprinkles water over his face. She was worried that Shiv wasn’t getting conscious.

Dadi asks Ganga to take his clothes off and wipe cold water cloth over it. Ganga was confused and reluctant initially. Ganga takes his clothes off. She then goes to find some herbs for Shiv as he lay their unconscious. She finds the leaves and puts it over his feet.

Shiv begins to shiver. Dadi tells Ganga to hold his body as he is feeling cold now. Ganga places her face over his chest. Shiv relaxes at once. Ganga turns to leave but Shiv had held her hand. Dadi compliments her love to be a magic. Shiv murmurs for water. Ganga gives him water.

Shiv wakes up. Dadi tells Shiv Ganga loves him dearly, she is the one who brought him back from his illness. Shiv says everyone must be waiting, they must go back. Dadi asks if he would drive.

At home, Aashi had sprinkled oil over herself and was about to suicide. Someone comes to pour water over her. It was Dadi who scolds Aashi for committing the suicide. She tells Aashi that Shiv and Ganga took care of the situation, she doesn’t need worry about it. She announces she would stay here until Aashi gets married and tells Aashi to go and change.

Gangaa 17 February 2020 Update ends early morning, Shiv comes to find Dadi preparing tea. He makes her comfortable on the bed and says he would prepare tea for her. Ganga came out of the room praying around Tulsi. Shiv asks her for tea. She doesn’t reply. Dadi stops her there and says Shiv is ill, Ganga must prepare the tea.