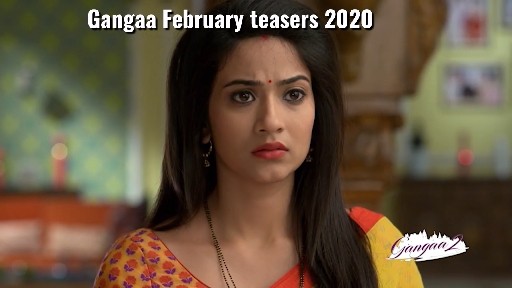 Sagar burial is conducted later, Everyone stood shattered at the last rituals of Sagar. Shiv is upset and stood outside, while Ganga only sat on the floor broken. He asks Ganga to go inside as it’s really late. Ganga didn’t respond. Shiv felt pity over her, then goes to sit with the wall.

The next morning, ladies called Ganga curse. Madhvi was also crying nearby. The ladies call Shiv lucky that she wasn’t married to Shiv. Kushal stops Shiv from taking any action, he has no right over Ganga and the ladies would say false words and bring disgrace to Ganga if he interferes. Madhvi comes to take a leave from Savitri, Shiv and Kushal. Ganga stops her ready to come with her.

Madhvi pushes Ganga away aggressively and says the ladies are right in whatever they say, she is cursed and destroyed her whole family. Niru and Sagar both left the world because of Ganga. She now has no relation with their family. She recalls Sagar wanted Ganga to marry Shiv as his last wish. He had taken Shiv’s promise in this regard as well. Madhvi thinks she must do this for her Sagar’s promise, she has hurt Ganga but for Ganga’s happiness. She looks towards Shiv and leaves.

Savitri nods at the widow ladies who remove sindoor off Ganga’s hairline. They were removing her bangles. Shiv asks what this all is about a s the ladies pushed Ganga’s hands over a stone to break her bangles. Savitri says Ganga is a widow now, she must stay away from all these jewels and makeup. Shiv was hurt recalling Ganga’s love for the bangles he had gifted her. He stops the ladies, then beats his hand for it to bleed refilling Ganga’s hairline with his blood. He announces Ganga would live as his wife. Kushal was happy.

Savitri asks Shiv if this is a game, even Sagar’s mother left her as she is cursed widow. He must not change the norms. Ganga must stay in white only, till death. Shiv doesn’t let Savitri remove the sindoor mark off Ganga’s forehead and says this is wrong for her to remove this.

Ganga remembers all the events in past few days. Shiv gets a call from inspector and assures to reach there. He informs inspector has arrested someone in the matter. Savitri wish Pratab has completed her work. Ganga announces she doesn’t accept this wedding. The widow questions Savitri about varied rules for her family and the villagers. Savitri thinks Sagar has left Ganga in a huge trouble.

Shiv was shocked to see Pratab sitting in the police station. He was enraged and says he could never dream of his younger brother being a murderer and questions why Pratab shot Sagar. He slaps Pratab hard. The inspector comes to tell Shiv Pratab caught the boy who shot Sagar and robbed them.

Shiv accepts his mistake for suspecting Pratab. Pratab smirks its really easy to bully Shiv and recalls giving a huge amount of money to the man for accepting the charge over him. Shiv grabs the collar of the man, Pratab and inspector stops Shiv. Gangaa 7 February 2020 Zee World Update

Outside the police station, Pratab apologizes Shiv and says he really respects Shiv. Brothers have arguments but he cares for his family a lot. He realizes he had strayed the right path, but he wants to regain the love of his brother. He made a false will because Shiv didn’t trust him. he hands Shiv a shoe to hit him.

The villager men come to show others the woman Ganga. They protest in front of Savitri they won’t leave without an answer about the injustice.

Shiv leaves Pratab beating himself. Pratab was happy that villagers are his side this time. There, villagers cursed Ganga for ruining the respect of the whole village. They had moved to attack Ganga but Shiv comes between. The villagers demand Shiv of justice.

Shiv says they are thinking it all wrong. The villagers call Shiv MathaDesh, and someone like him can never be a MathaDesh. One of them throw a stone that hits Ganga’s head. Shiv comes to wrestle the villagers. Savitri thinks she must now stop this fight and leave the matter to Panchayat.

Everyone goes to Panchayat. The widows accuse Shiv for marrying a widow. The villagers demand for justice for themselves. Shiv says fate made him and Ganga meet, he married on his father’s consent but had to take the responsibility of his wife.

Whatever he has done is not against their believes. The villagers accuse Ganga for agreeing to stay with Shiv even when Sagar was alive. Ganga speaks that she was and she is pure today, she considered herself as Shiv’s wife because she was told so. Now, she denies accepting Shiv as her husband. Gangaa 7 February 2020 Zee World Update

Everyone including Shiv was shocked. Ganga says she didn’t remember anything, but now she recognizes herself. She doesn’t accept being Shiv’s wife. She wants to live as Sagar’s widow, it is her right and no one can take this right from her. She accuses Shiv for filling her hairline without her consent. She is used to living in white dress, fate has again brought her with widows. She always wanted to fight for the rights of widows, today she demands her right as a widow. Savitri sides Ganga, and says society would never accept the relation between Shiv and Ganga.

The Panchayat member stops Ganga and says Shiv filled her hairline. They realize Shiv and Ganga stayed within a single roof, they can’t part ways so easily. Sindoor has a value in their eyes. Ganga asks what he means. The Panch says they have decided that Shiv and Ganga must stay with each other for one month; during this time they must decide if they want to live together or part ways. Panchait would then decide upon their consent. Savitri questions how her son can marry a widow, Ganga also denies accepting this decision. She wants to live as Sagar’s widow.

The Panch announces the punishment for Ganga. Ganga was ready to accept any of the punishments. The member announces not only Ganga but the whole Jhaa family must leave the village. Savitri thinks the matter is being ruined. The Panchait announces a boycott against their family if they don’t accept the decision of Panchait.

Savitri comes to Ganga and cry in front of her, requesting to come along her. She pleads for not being able to bear such disgrace only because of Ganga. Ganga agrees to go with Savitri and accepts Panchait’s decision.

Gangaa 7 February 2020 Zee World Update Savitri comes home. Riya stood with the thaal to welcome Ganga inside. Ganga denies being her sister in law. She clarifies to Riya she would only stay in this house for one month. Dai Maa sits to pour water in red color. Ganga cries watching it as she remembers her wedding with Sagar. Shiv had come to stand behind her. She was disturbed by all the recent developments. She walks inside the house without stepping into the color and goes to pour water over herself washing her sindoor off. She announces a widow is never welcomed into the house