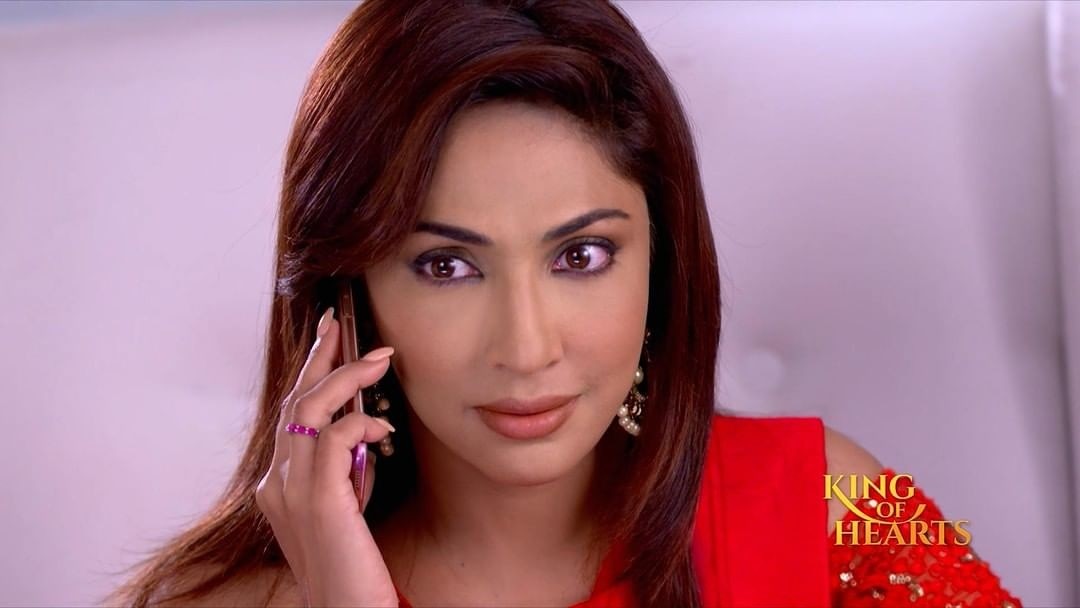 King of Hearts 9 February 2020 Update Satya saves Shabnam’s lookalike. Inspector comes there and says she is mad, and thinks her husband will come, and then goons follow her. Krutika tells that she is a Shabnam’s lookalike, and tells Satya about Shabnam’s story that she was Roshni’s step sister, came to separate Roshni and Sid, but then she was changed and helped Sid in finding Roshni.

Inspector says she is Shabnam’s daughter Kareena. Satya says I have to return Shabnam’s favors, and tells Inspector that they will take Kareena home with them. He asks Krutika. She says okay. They reach Khurana house….An emotional song plays…..Krutika tells Satya that it is his house. She goes inside. Satya sees Sid and Roshni’s pics on the wall. Marjawun ya Jeelun zara plays………….He gets emotional and happy. He tells Mahi that this is his family and his mum was like a princess.

Krutika brings Raj there. Raj gets emotional seeing Satya. Satya folds his hands and touches his feet. Raj blesses him and keeps hand on his head. Raj calls him Sid…Satya kisses on his hand. Krutika says lets do aarti. A woman comes and asks her to stop. Satya and Mahi are shocked.

Woman throws the aarti plate in air and asks how dare you to bring these people here, without my permission. She says I am your saas and still alive. She asks how dare you to take this decision. Mahi says she is Satya’s bua. Woman asks her not to interfere and says I am talking to my bahu. Krutika says mummy ji…Karanveer is my nephew and my Sid’s son, I thought I shall take him to my house.

Woman says I think I shall make you remember you value and raises her hand on Krutika. Satya asks her to stop and says she is my Bua, whom I respect a lot. He says I like your dhamaka avatar, but I can’t tolerate if anyone slaps my Bua. Krutika asks him to go, and says he don’t want to mean this. King of Hearts 9 February 2020 Update

Satya says I read my Baba’s diary and had cultured, but I am uneducated and uncultured. He says you have misbehaved with my wife also, but I kept quiet. Don’t raise hand on my Bua, and asks her not to do anything wrong. Woman asks Krutika why she is silent when Satya is insulting her. She says now see what happens later. She asks Satya not to jump and goes. Krutika cries.

Satya asks her not to cry and says old radio makes such sounds, and will be alright. He hugs her. Krutika tells Satya that her husband Bunty left her and took her son Aryan with him. She says my son Aryan is still in touch with his dad, but not with her. She says my saas is not bad at heart and asks him not to hurt her. Krutika’s mum in law tells her that she is going to Aryan.

Krutika says you can’t go. Her mum in law tells Krutika that Satya is an illiterate and looks like goon, will get all Khurana’s 1000 crores wealth. King of Hearts 9 February 2020 Update

Krutika looks on and asks her saas to give a chance to Karanveer. Her saas tells that she don’t believe on Satya and is only scared about her respect. Krutika says Satya is Sid’s son and will never insult you. Kareena cries and tells Satya that her finger is bleeding. Satya puts ointment on her hand. Shabnam like a child, asks her to blow on her wound and kiss on it, like her mummy. Mahi looks on.

Krutika begs infront of her saas not to leave. Her saas agrees and asks her to tell Satya not to misbehave with her. Kareena asks Satya to blow on her injured finger. He blows on her finger. Mahi gets upset. Satya sees her upset. Krutika is with Satya and Mahi. Satya says he likes kesar kheer. Mum in law comes and says she needs clothes from terrace. Mahi says I will bring. Satya tells Krutika that she talks so sweet.

Mahi goes to terrace to get her clothes. Someone cuts the rope holding the supporting pillar to make it fall on Mahi. Satya comes on time and saves her. Kareena claps and tells Satya that hero saved her. She tells that bad aunty has cut the rope and that she saw her cutting it. Mum in law smirks and goes. Satya comes to her and asks how dare she to make supporting pillar fall on his wife. Mum in law asks him to stop blaming her, because of Kareena. Krutika says you can’t accuse her, believing Kareena and that her mental state is not fit.

Satya apologizes to Krutika’s mum in law. Satya tells Mahi that bua ji’s saas is not good as Krutika thinks. Mahi says even she has a doubt on her. Satya says that woman is holding Bua’s weak point, ie her son. Mum in law goes to meet someone in night and says she is doing as per her/his plan. The person sitting in car give something. Mum in law says Satya will never know from where he was attack.

While Satya is working. Kareena comes and asks her to play with him. She shouts and says lizard went inside her clothes and asks him to remove her clothes. Satya thinks where I am trapped. Mahi comes there. Kareena hugs Satya. Satya asks Mahi to help Kareena. Mahi takes out fake lizard from her clothes and shouts. Kareena hugs Satya. Satya tells Mahi..you have scared her. Satya says next time, worm will get inside. Mahi makes her wear dupatta and says there is nothing.

Mahi tells servant that she will clean the inhouse temple. Krutika’s mum in law thinks to do something. Kareena comes to Mahi and asks her to come and see her drawing. Mum in law wears gloves and sprinkle something to ruin the temple’s sacredness. Mahi sees her drawing and says it is good. Mahi gives prasad to Kareena. Kareena thanks her and goes. Krutika comes and greets Mahi.

She says she gives aarti and gangajal to Raj daily in the morning. Mahi says even I will come. Mum in law says boom….Krutika and Mahi come to Raj. Krutika says prasad is in temple and goes to get it. Mahi says I will give him aarti. She adds gangajal and kerosene oil catches fire. It falls on Raj. Mahi says Dadu.

Satya and others come there. Mahi says she added gangajal in the pot and fire broke it. Mum in law asks why she is lying. Satya sees Raj’s legs burnt. Krutika asks Mahi not to lie when she has done a mistake. Mahi says I haven’t done anything and goes. Mum in law says this is your sanskari kids, and says she will call doctor. Krutika asks Raj if he is fine.

Satya tells Mahi that he is sure that she has not done anything. Mahi says I am feeling very bad and says that gangajal pot caught fire. Satya smells her hand and says some chemical is on her hand. He says chemical was on that pot due to which fire broke out. He says someone is doing this intentionally. Mahi says aunty…I can’t believe that she can do this. King of Hearts 9 February 2020 Update