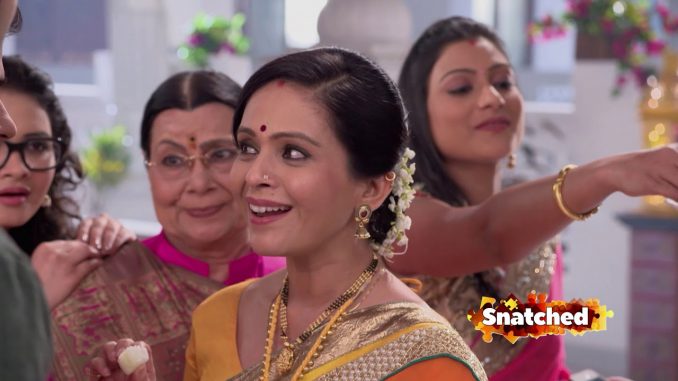 Snatched 22nd February 2020 Zee World Update starts with ajju and sanjina in court, they sign the papers. The officer says i am sorry this wedding can’t happen. Agarwal is standing outside, the officer says you have 6 months left to be 21. you can’t marry till then. Sanjina sees agarwal and says papa will take me from here. please do something. Ajay says you don’t even know what your age is. Agarwal is coming in their direction. Ajay recalls what ajju said that he saw him marry another man.

Ajay signs the papers, Ajju says what you did? Ajay says i am 21 and my name is ajay too. agarwal comes in and grasps sanjina’s arm he says come home you.. Ajay says you can’t take her anywhere she is married now. Agarwal says what? Ajay shows him certificate. he says i am her dad, i don’t accept this wedding, come with me. sanjina says i am an adult i wont come with you.

You took all decisions for me you never thought about my happiness. This is why i am going against you. I am married legally, you can’t take me with you. officer says they are married now, you can’t change that. you should go from here or i will have to call cops. Ajju says make each other wear the garland. i should take a photo. ajay and sanjina make each other wear the garland while ajju shoots it with a broken heart. Agarwal leaves and says keep one thing in mind, you have crushed my name. you will never live happily with him. Don’t come to me ever again. he leaves.

Shreya says you are all looking for culprit? you don’t need to. Because vinati is responsible for all this, amar says what are you saying? Shreya says she was the last in kitchen, that means she left the window open. Bhushan takes her to a side and says why are you doing this? She says you accused me of something i didn’t do. He says what did i say? She says you said because of me everyone is disappointed, you said i don’t fit in your family.

Now you know whose mistake was it. it was not my mistake still i had to pay. Vinati says i forgot to bolt the window i got a call, i am so sorry. Shreya says sorry is enough? i apologized bhushan as well? did he listen? bhushan ask your bhabhi if she left it open deliberately or not? Vinati says why would i do it intentionally.

Shreya says i was blamed, no one tasted my pumpkin, vinati got all the attention. no one even bothers about me. Not even bhushan and we should learn how to seek attention from you vinati. dadi says forget what happened. Shreya says this is not the first time, vinati always does this. She took the cook i made for everyone, while i brought it for bhushan. She made me look selfish. I have a request bhabhi stop doing this because i know your reality.stop it now with me at least. You could share with me what everyone likes, you fear i might take your place. Elaichi says shreya stop it. No one ever talked this way.

Ajay says in heart this is next to impossible to conceal this from family, Sanjina says is this a nightmare or what? She stands up and says i got married to ajay? And you? why did you do this? She says ajju why are you not saying anything? Lets go we will file a divorce. Why are you not standing up? ajju i love you, i wanna marry you. are you getting what i am saying. ajju makes her sit and says i know i made a mistake. Sanjina says i dont love him. Ajju says he is not our enemy.

Sanjina says he is not my bf. he says just think if he had not signed? your dad would have taken you with me, he would have killed me. sanjina says what should we do now? Ajju says i have thought everything. he says to ajay i know what you are thinking, where you are stuck. This will stay between three of us. i know you are worried about your family, after 6 months i will take her with me to Us.

sanjina says where will i live? Ajju says i have rented an apartment for you, you will live there. After 6 months i will take you with me, and you will take a divorce from him. ajju says ajay now stop being worried, hug me now. Take care of her, and yourself as well. manage with her for six months. He gets a call and says yes i am leaving for airport sir. sanjina says you there? ajju says i love you sanjina, its just for 6 months i will come back and take care of my wife to be ajay. He gives sanjina’s hand in ajay’s.

Shreya says you are asking me to be quite? please let me speak up today. She is always scared that i will take her place. bhushan asked me not to use the words own and outsiders. why do you all trust her so much? don’t do. one day these people will deceive you. you wont like what i am saying, i will prove myself right. own people are own and she is outsider. Bhushan says enough, he is about to slap her. Elaichi says dont to this bhushan. He says what the hell you saying shreya? Shreya takes her hand and goes to her room.

Shreya comes to her, bhushan comes in and says how dare you to say this about vinati bhabhi? go and apologize everyone. she says you should apologize me, you were about to slap me. He says do you have any idea how much you have hurt them? shreya says do you know how hurt i am? You only think about your family. bhushan says yes my family is important for me. are you not part of it? shreya says if you want to save this marriage and if its important for you then we have to live separately. Bhushan is dazed. He sits on the bed in distress.

dadi says its not such a big issue. Relax everyone. Vinati says shreya has some misunderstanding regarding me. I am not like that. elaichi says we all know what you are. Shreya is mad, its useless to talk to her right not. Let her calm down then i will talk to her.

Dadi swipes vinati’s tears and says calm down. She hugs her and says go and make us all the sweets that you always do. will you? Shreya comes there and sees them, she has her bag in the hand. shreya comes and says i am leaving this house, dadi says don’t say that this is your house as well. shreya says i dont wanna leave as well. but i dont think this is my house. kirlok says shreya calm down, leave the bag.

Sometimes you fall in the storm but the garden remains same. No one leaves the house for temporary problems. shreya says this is not temporary. The bhushan for which i left my family and tried ti adjust here he was about to slap me in front of everyone. Mummy ji stopped him or he would have. Would you live in the house where no one respects you or loves you? Shreya says don’t leave me. She takes her bag and starts walking.

Ajay says how will i tell them everything after this drama. Vinati is crying, dadi and mishri are trying to console her. Vinati says shreya thinks we are outsiders we can never deceive you. kirlok says we know how nice you are. All of kids are different from each other. Elaichi says but you all 7 are mine. kirlok says you have all our teachings you can never take the wrong path. Ajay overhears it and stay quite. Dadi says come hug me now. Vinati hugs her.Sanjina calls ajay but he cancels it. she calls again. she says everything is not okay here. SHe says i have not eaten anything. He says go eat. she says i dont have money. He says its on closet.

Sanjina says ajju has taken the key. i don’t have my atm card. can you bring me food. Ajay says no i can’t. she says i am your responsibility, you promised ajju to take care of me. Ajay says okay okay.

Shreya comes home, her mom is shocked. shreya tells her everything. bhushan comes and says i am so sorry for what shreya did. Elaichi says things happened before as well. You were kids back then but this happened. When ayush and rest of the kids who came here to live, you were so mad at them. You used to get jealous when ayush used to sit in kirlok’s lap. But now, things changed with time. you love avni more than anyone now. you love them all now. Everyone is your own here, even ajju. Like you took time to digest it, shreya will take time as well.

Snatched 22nd February 2020 Zee World Update Shreya says to her mom you are blaming me? she gives her water. Her mom says this is your bad that you lft your house. You proved vinati right by dowing this. Her mom says Vinati wanted bhushan to marry girl of her choice so she could dominate her but he married you. so she doesn’t like you.