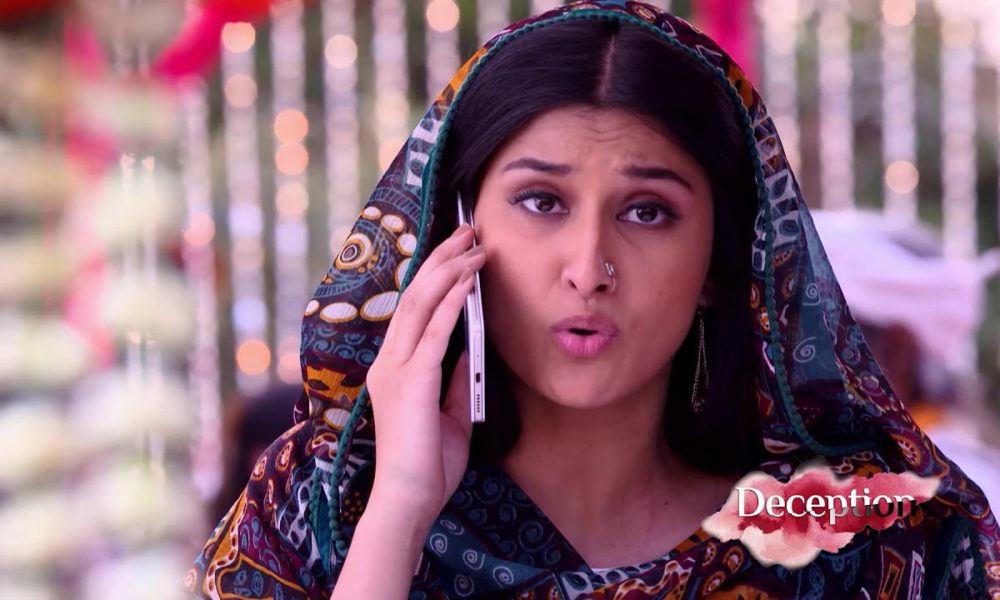 Supriya talks to baba’s pic and says she doesn’t have the courage to enter Naren’s room and console him. Meanwhile Naren messes up the room and tells that he will clear all the things and memories which is related to Pooja. Supriya comes to his room and knocks on the door. He steps on the broken glass piece and gets wounded. He shouts and cries thinking about Pooja’s words. Malanga Re plays….He cries badly. Pooja is in the car and thinks about him.

Naren gets a letter and money kept over there by Pooja thanking him for repairing her mum’s jewellery. Naren throws money in air and looks angrily. Supriya cries seeing his anger. She asks God for the way to reach Naren. Mayank comes there. Supriya holds him and cries telling about Naren.

Pooja comes to meet Satish. Kusum asks how can Naren and Supriya let her go. Satish says Supriya is sending her to complete her education. Anuj says they are supportive. Kusum suspects fishy and calls Naren, but he is sitting in shock and don’t pick the call. Rahul asks Lawyer to leave if he can’t bail them out. He says he will bail out Neelima and Hardik, but you are here in drugs trafficking and attempt to murder case. Rahul holds his neck and tries to beat him. Neelima stops Rahul and says sorry to laywer asking him to bail them out soon. Lawyer says ok and goes. Rahul says he will not leave Naren Vyas. Neelima asks him to suppress revenge fire for now.

Supriya cooks up same fake story about pooja. Mayank is shocked and tells that he will take up Naren’s responsibility and won’t let anyone ruin it. Supriya asks him to take care of himself. Satish tells Pooja that when she returns after a year then he would have been beating silver plate on terrace happily. Pooja says she has hurt Naren and killed all his hopes. Satish asks her not to worry till Supriya is there.

Anuj asks her to get ready. Pooja calls Supriya and asks about Naren. Supriya asks her to get return tickets booked now itself and don’t wait for her call. Mayank comes to Naren and tells that she even broke your heart and called me maskara. He asks if he wants to take a sip of wine and asks him to come out. Naren says there is just darkness in his life now. He puts all the study books on floor. Supriya looks for Naren.

Surbhi collides with her and their phones fall down from their hands. Surbhi picks up the phones and gives one to Supriya. Phone rings. Supriya picks the call. She sees Rakesh’s call and picks it. Before she could say, Rakesh tells that truck is about to hit pooja in sometime and says She has left from Dehradun and she will be killed on the way. Supriya is shocked to hear Rakesh’s evil trap for Pooja. Surbhi comes to Supriya and tells her that it was her phone which is with her.

Deception 4 March 2020 Update continues as Supriya gives a shock look and goes. Surbhi is shocked to see Rakesh on call and tells him that Supriya came to know everyone, now she has to die too. Supriya leaves in car and makes Guru ji sit in car, she asks him to protect Pooja. Anuj and Pooja are in the car. Pooja tells Anuj that their phones are not charged. Anuj says you could have charged your phones. Their car is stopped because of Ganapati ji’s visarjan.

Guru ji ji sees Anuj there and gets down to talk to him. Anuj sits in car again. Pooja’s car goes. Guru ji rushes back to car again. Surbhi tells Rakesh that she will not come until the work is done. Satish calls Supriya. Supriya says Pooja will reach on time. Guru ji tells Supriya that this truck is going to hit pooja’s car. Supriya is shocked. Naren looks at Pooja and his pic and tears it. Supriya hits the truck with the car before it could hit Pooja’s car. Pooja is saved. Satish hears the car accident noise and asks driver to stop the car. Naren decides to leave old Naren and break all the relations. Guru ji dies on the spot. Supriya might also be dead.

Naren thinks about Supriya’s words and calls Reporter telling that he has a news for him. Pooja gets down from the car to see who met with an accident. Anuj stops her and tells that they are getting late for airport. Naren burns the study books while Mayank tries to stop him. Jogiya song plays…He says I have burnt Naren today, don’t know what Naren will come out of this ashes. He thanks God and Pooja for making him ashes. He walks out. Pooja is restless and thinks her phone is not charged. Anuj asks are you fine?

Pooja says yes, and says she is feeling as if she lost something. Ambulance comes to take Supriya and Guru ji to hospital. Harish gets down from his car as he was passing from there and is shocked to see Supriya’s state. Surbhi and Rakesh think one trouble is gone. Surbhi tells Harish that she will go with Supriya. Harish says I will go with her. Surbhi asks Rakesh to make sure Pooja is not saved. Harish sees Guru ji’s body covered with white cloth and is shocked. Rakesh calls the goon and asks him to make sure Pooja don’t step inside the airport. Goon assures him. While goons are watching Pooja. Pooja and Anuj go inside airport.

Supriya sees Surbhi and points finger at her. Surbhi holds her hand and says she is with her. Harish cries and asks Doctor to save her. Satish is in the car and is restless thinking about Pooja. He comes to airport and collides with goon. His phone falls down. Satish sees Pooja’s pic and is shocked. Goon asks did you see her. Satish says may be she went to parking lot. Goon talks to Rakesh and says Pooja’s own family wants to kill her.

Satish hears him and is shocked. He comes to Pooja and asks her to go immediately. She goes inside. Goons see her going inside, but don’t see her pic. Satish thinks why someone will try to kill her and worries thinking about the accident sound. Surbhi asks Rakesh if the work is done. Goon calls Rakesh and tell that they can’t kill Pooja. Deception 4 March 2020 Update

Satish comes to the hospital. Surbhi and Rakesh are shocked. Pooja thinks she will be with him after a year. Satish asks Mayank how did this happen? Mayank says we don’t know. Nurse informs them that Supriya gained consciousness. Surbhi and Rakesh panics. Harish holds Supriya’s hand and asks her to have some strength. Harsha says we will take you home in 2-4 days. Satish says you were trying to tell me something about Pooja.

Supriya asks who is Pooja? Harish asks why you are saying this? He asks Doctor to check her. Doctor says we have to keep her under observation, I am afraid that she might suffer memory loss. Surbhi and Rakesh smiles. Harish is shocked and is about to faint. Satish holds him. Surbhi tells Rakesh that Supriya will not call Pooja now. Rakesh says if she gets back her memory. Surbhi says she will make sure. She tells that if Satish comes to know about Pooja’s life in danger then he won’t let her return. If she returns, then we will dig a valley for her. Naren asks Servant to give newspaper. He reads the news that Vyas son have abandoning his mum and wife. Mayank comes and looks at him emotionally.

Surbhi ask Rakesh to stay far from Naren as he has become wounded tiger now. She says she called media. Neelima tells Hardik that they will have no value without Rahul. Harish tells Harsha what he will tell to Media, and says why Pooja left. Harsha says it was good that she left and calls her Mohini. Media bombards Harish with questions. Naren drinks wine in his room. Harish tells Media that Pooja went out of country for few days and is very much part of the family. Neelima says she is our lifeline and this house is incomplete without her. Hardik says he still walks behind his brother.

Just then Naren laughs aloud and comes downstairs. Media asks him if his wife left him. Naren asks all female journalist to leave. They ask why he is insulting them. Naren says your self respect is cheap. He says you got enough masala and asks them to go. Media leaves. Neelima asks Naren not to worry and says Supriya will be fine soon. Naren asks her not to show fake sympathy and asks her to get out of his house. Harish asks what is wrong with you, what you are saying? Naren says even you needs to pack your bags. You have so much love for Pooja, I didn’t see before. Harish says he had to tell that infront of media.

Naren says he don’t care what he do outside the house. He says you have named house and property on my name. He asks Harsha, mayank and Rakesh to stay in his house as they disliked pooja. Surbhi says even she dislikes Pooja. Naren declares that Neelima, Hardik and Harishs have to go from there. Harish cries. Neelima packs her bags and says let my son come, he will ruin you all.

Harish packs his bag and leave silently. Harsha feeds food to Mayank. Mayank says he will not leave Naren and says why did Supriya bring Pooja here? Harsha says Supriya was helpless to change him. Mayank says Bhai is dead now because of that change. Surbhi meets Rahul in jail. Rahul says he accepts the deal. Surbhi says it is unvalid now. She tells him that Pooja gave divorce to Naren, and he is making space for her in his room and heart. Rahul is shocked.

Rahul says you are still my wife legally. You can’t get other husband until I am here. Surbhi says I know you are stubborn, and I can file divorce and court will give verdict in my favor. She says you are still drown in many cases. Rahul says he will see how she takes divorce from him. Surbhi says she will not come again and tells him that Rakesh have changed party as usual. Rahul is shocked.

Deception 4 March 2020 Update ends as Pooja thinks to call Supriya and thinks Naren might be fine by now. She calls on Supriya’s number. Surbhi picks the call. Pooja asks about Supriya. Surbhi says she went out. She asks about her location. Pooja tells her that she is in Chicago. Surbhi smiles. Pooja calls Satish and asks him to visit hrishikesh once. Satish asks her not to worry about them for a year and ends the call. Surbhi calls Rakesh and tells about Pooja’s location.