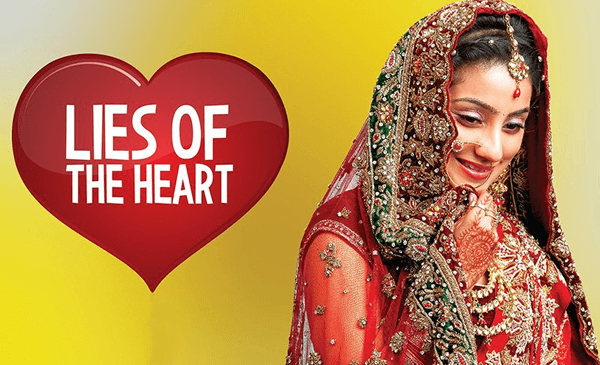 Lies of the Hearts 4 March 2020 Update begins when Trisha’s mother ask trisha why doesnt she like him, as he even got his own mother to apologise, and that nowhere they would find a man who can do this much for his in laws’. she tells trisha that everyone likes samrat, and her opinion doesnt matter. Gaurav asks ishaan how did samrat feel about trisha’s behaviour. ishaan asks him not to worry. buaji comes in to amsue them. meanwhile, urmi and trisha are tensed. trisha asks urmi if she’s angry at her.

Urmi says that she knows that she didnt do it intentionally, but hopes that samrat and his family understand it oo. buaji comes in there too, initiating a conversation, and lightening the mood. Samrat’s bhabhi compliments urmi for her dance. urmi thanks her refrring to her as bhabhi. She gets angry and asks her not to call that. urmi is tensed and asks what to say then. she relives urmi and others by saying that urmi should call her sister.

urmi happily accepts. kanchan, urmi’s bhabhi, is surprised to see her bade papa, also having come there. He compliments urmi on her dance and behaviour too. He says that he has to leave now. he excuses himself. Saroj asks about samrat’s mother, shashi.

Rasshmi speaks on shashi’s behalf, apologising secretively on her behalf, that triahs should be sorry for this, and had it been someone else other than shashi, she would have been very angry. shashi asks her to let things be now. trisha again apologises. ishaan comes into lighten the mood, by getting her lemonade.

triahs’s parents apologise profusely for her behaviour. in her garb of showing concern,. shashi doesnt leave any chance to taunt trisha on her behaviour. all are tensed. ishaan asks her to sit down, but shashi says that she’s very busy, and has to attend to other guests too. urmi is very tensed. shashi leaves, saying that she just came for trisha.

After she leaves, ishaan tries to lighten the mood, but everyone is tensed. Samrat comes in asking whats the matter and why they all look so tensed. Buaji smilingly says that they are all scared of his anger. Trisha’s father apologises to samrat for trisha’s bad behaviour. Samrat says that he doesnt need to apologise as trisha didnt do it intentionally, and she wasnt well too, and needed rest. trisha eyes samrat curtly while samrat smiles evilly.

trisha’s father is relieved, while all praise him for his down to earth behaviour. ishaan asks them to relax now atleast, praising samrat. samrat thinks that now on, as days pass, urmi would herself refuse to get her in her marriage. All thank samrat profusely. after he is gone, urmi and other are relieved. urmi asks for the washbasin, and moves towards it. samrat finds her going and goes after her.

While she’s washing her hands in the basin, samrat creeps in behind her and she gets scared. She is shy while samrat takes her hand and asks her not to be scared as long as he is there, and that they should get a chance to talk, as they are getting married after all. He asks for some time from her, to be able to talk. urmi is happy inside, but is shy on the outside. Samrat says that he’s waiting for urmi at the terrace. urmi asks that there are so many guests, how would she be able to come.

Samrat says that he doesnt know that, but she should think not about the guests, but about him, that what he would feel, if she doesnt come. he asks her to come soon and leaves. urmi is shy but excited inside too. anu comes and asks what was he asking for and when she knows anu gets very excited. urmi asks what reason would she give to all the people sitting. anu says that they would excuse themselves for the washroom. Anu goes along with urmi, and takes her on the pretext of the washroom, while samrat waits on the terrace.

urmi gets up on the terrace with anu, and goes onto meet samrat, shyly and nervously. Smart is oblivious of her presence. He turns around to find her standing. He compliments her on her dancing skills. urmi asks if he liked it. he asks how could he not. urmi asks what did he want to talk about. samrat says that he didnt want, but he would have to. While urmi is happily dreaming, samrat brings up the topic of trisha, saying that whats he did wasnt good, and she didnt like it. urmi gets tensed, and tries to make up for her, saying that she wasnt well, or she wouldnt have done that. samrat says that trisha doesnt like him, and she shouldnt hide it.

Lies of the Hearts 4 March 2020 Update continues as Urmi is tensed, and says that they are just both different people, with different opinions. samrat says that he never bears the wrong. He reminds how he had made his own mother apologise to them. urmi says that they all rever him for that, but trisha’s case was something different. Samrat says that he doesnt let anyone particularly anyone, to play with his respect, not even trisha. He says that he didnt create a scene, just to keep their respect, otherwise this was something he wouldnt ever have tolerated. urmi says that he’s thinking wrong, as she didnt do it intentionally. smart says that he doesnt care for that, but the fact is that she did, and thats beyond his toleration. urmi is highly tensed. she apologises.

urmi is shocked at samrat’s demand, when he asks urmi to tell trisha to leave. urmi tries to clarify, but samrat says that trisha herself told him to leave and call off the wedding with urmi, and she can go ask her if she wants to. Samrat tells urmi that she’s going to be his wife, and therefore his respect is hers, and his disrespect also is hers. He says that if she cares for him even a little bit, then he shouldnt find trisha at the wedding. urmi is highly tensed and shocked.

The mehendi ceremony is going on with festivities and much banter and merriment, while urmi is tensed thinking about samrat’s demand, and trisha’s behaviour with him. Rashmi startles her by asking the mehendi wali to put samrat’s name in hiding so that he isnt able to identify it easily. Buaji begins to tease urmi about samrat’s name. All are discussing the sarees to be given to samrat’s lady relatives. saroj asks trisha to get the mehendi done too. Rashmi taunts her to ask trisha if she evn wants to put mehendi, or would throw a tantrum at that.

Saroj lightens the mood, saying that she would do this for her sister. rashmi again points out her moody nature last night. granny asks her to let go of the past, while trisha is tensed. rashmi says that they cant ignore such a big thing. urmi is tensed too. rashmi asks what happened that trisha did this, as she doesnt look sick at all. Triahs is upset. She tells rashmi that she isnt feeling unwell. her motjer asks her to be silent. rashmi taunts her more at that. She asks triahs why did she insult samrat intentionally then, and what wrong thing did he do then.

Trisha says that she didnt like it. Rashmi says that she should have said no then, taunting her all the while. the entire family gets tensed. rashmi says that no one tied her to go. garnny asks rashmi to let go. rashmi imposes on them how much she had to make an effort to compose shashi ji, for urmi and their sake. granny agrees but still asks her to forget as its in vain to talk about it now. But rashmi doesnt stop at taunting hints, while praising samrat and his family, who didnt do anything in retaliation.

Trisha’s mother apologises for trisha’s sake. But trisha is in a rage, that they shouldnt forgive her, rather they should crucify her for such a huge mistake. She leaves, while all are tensed. rashmi goes onto say that this attitude would definitely cause something hugely wrong. trisha’s mother goes after her.

Nirmala reprimands trisha for her strange behaviour. trisha says what about the torture she is undergoing. But her mother doesnt listen to her, and asks her to be quiet til atleast urmi’s wedding. Trisha says that she doesnt samrat at all. She says that noone asked her opinion, and samrat is liked by urmi and her family. Saroj comes in and asks her to stop being so angry at her. but Nirmala, is super angry at trisha, who’s insulting everyone in the family. saroj tells trisha that she isnt at fault, and its not known when the boy’s side feels bad. she too goes onto praise samrat, about his good behaviour when he never said anything at trisha’s behaviour.

She asks her not to be tensed thinking about that episode, or rashmi’s taunts as she had heard herself. she asks her to cheer up, so that rashmi isnt able to taunt her. she asks trisha to forget everything except that urmi has to be happily married off to samrat, and there wont be any problem if she stays happy. Triahs nods in agreement. She asks trisha to get the mehendi done with urmi, as she was tensed too.

The gents are discussing things together. her father gets emotional thinking that on one hand, he is happy that urmi got such a nice husband and world, but is sad that she would leave tomorrow. He says that now only anushka remains, and once she is married off too, they can be relieved. trisha’s father says that girls need to be taught to be independant. urmi’s father says that most of the people are like this only, who think about a girl’s marriage right from their birth. trisha’s father says that he doesnt agree to this. gaurav also agrees to devishankar’s opinion, and recounts the huge differnces between marrying off a son and a daughter. trisha’s father expresses happiness that urmi got such a good family. they assure devishanker of the same too.

Family is prepping up for marriage arrangements, when ishaan comes in to lighten the mood, asking samrat to apply mehendi. Samrat says that ehw ould remain the same, as a girl’s entrance in his life wont change him. he says that he is a dictator not a servile person. His motehr too agrees with him, while all others are tensed. samrat makes fun of diwaker being one like that, and that he himself wont change at all.

Trisha is on the roof, remembering nirmala’s and samrat’s words, and is tensed. urmi comes there, tensed herself and finds trisha lost in thoughts. trisha is asked by urmi if she didnt sleep. Urmi says that she wants to talk to her about something. she asks if trisha doesnt like samrat at all. trisha is hesitant to answer and asks her to go and sleep.

Lies of the Hearts 4 March 2020 Update ends when Urmi asks her not to ignore her and answer. trisha again maintains her stance as she feels that samrat isnt the right person for her. urmi asks trisha is she told samrat that she doesnt want that samrat and urmi get married. While trisha is shocked at that and eyes her tensedly, remembering her confrontation with samrat, she says that this discussion is useless. But urmi asks her to give a yes or no. Trisha goes onto say that yes she had indeed said that. urmi is shocked. the screen freezes on her face.

Related Topics:Lies of the Heart
Up Next