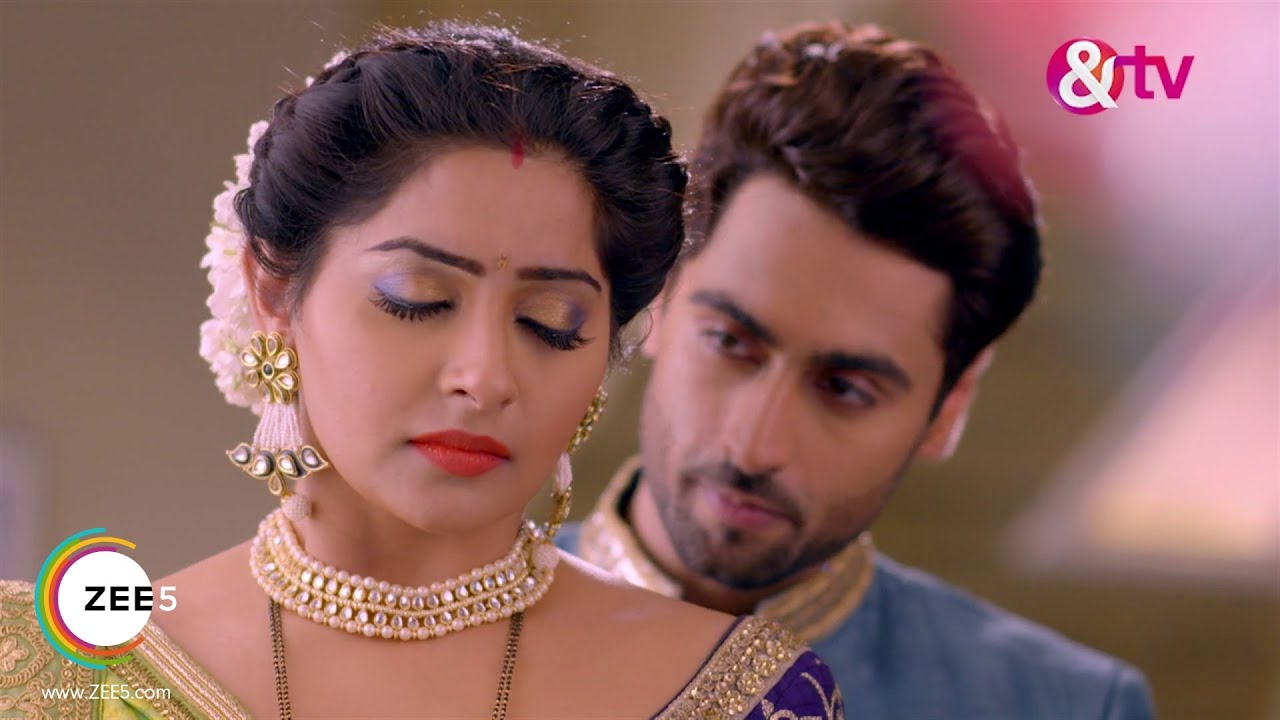 Shristi nervously searches for her exam results on laptop. Poonam says Shristi will get distinction, but she is worried about herself. Shristi says page is just browsing. Vishu asks Anurag to check Shristi’s results and gives her roll number.

Anurag checks and says Shristi came in top 10. Vishu happily runs all around house and informs that Shristi passed her exam and came under top 10. Daadi gets happy and Vidhvan says they will distribute sweets in whole village. Revati scolds no need for that.

At Vikral’s house, Ragini tells Vikral that she will go and frighten VDO again as he may not do their work. Vikral praises that she has learnt to judge people well. He then asks if she spoke to damadji/Anjurag. She nervously says yes. He asks to call him and speak again. She says he is very busy in his project. He insists again. She calls Anurg and hopes he does not pick call. He picks seeing her number. She says he must be busy. He asks if her father is around. She says yes and says she will inform babuji that he is busy.

Anurag thinks she used to pester him to talk, but is hesitating now, something is wrong. He calls back. She speaks nervously and disconnects.

Vishu packs gift for Shirsti and thinks of congratulating her personally for passing exam. Shekhar on the other side gives gifts to Shristi and Poonam and congratulates them. Shristi starts weeping in emotionally. Poonam says she should be happy instead to come under 10th rank. Shekhar makes Shristi cut cake. Shirsti feeds Poonam, and Poonam takes Shristi and Shekhar’s pics. Shekhar opens her gift and gets happy seeing apron.. Shekhar says it is the best lawyer in making. She wears apron.

Ragini with Narad goes to meet VDO. Narad says VDO that he did not take Ragini seriously, she is famous in whole area. Ragini scolds VDO and asks how dare he is to not pass her babuji’s tender. VDO says a man challenged her father’s tender and got it. Ragini asks who dared to challenge her babuji. He says Anurag Singh. She stands shocked. She warns VDO to cancel Anurag’s contract, else he will face dire consequences. VDO calls Anurag and says since he does not have a few required documents, his contact is being canceled.

Anruag thinks then he has to return back to London. He tells VDO that he got another offer from London and was about to inform him to cancel contract. VDO thanks him and informs Ragini that her work is done as Anurag told he is going to London and asked to cancel his contract. Narad thinks something is wrong, Ragini is hiding something. Ragini thinks she wanted same, but why she is feeling bad.

Ring of Fire 5 March 2020 Update continues as Ragini tells VDO and Narad that good her work is done peacefully. She asks VDO to take care of his heart and leaves with Narad. At Vidhvan’s house, Divya informs Arjun that Vishu is no where at home. Dulari hears that and calls Revati and informs her. Revati shouts he must have gone to meet Shristi, she ruined her both sons’ lives. Vidhvan shouts that she should look into mirror to see her sons’ real enemy. She thinks how did her 36 characteristics match with him, since they are married, he is fighting with her always.

Shekhar and Shristi return to their office. Shristi tells Shekhar that the have to file petition for new client, so their party is canceled. Vishu waits for Shiristi and seeing her runs and hugs her, congratulates her for passing exam and gives her gift, says he made it. She says he should not have come here. Anurag enters and says Vishu came again without informing family. He congratulates Shristi and tells Vishu can spend some time with Shristi, asks Shristi to drop Vishu near bus stop in the evening. Vishu gets happy. Anurag leaves. Vishu asks Shristi to show her court and walks with her.

Ragini walks with Narad towards Shekhar’s office asking him to bribe lawyer and ask him to stay out of babuji’s case. She walks into office and remembers Shekhar coming to Anurag’s house with Shristi and Revati alleging him that he is spoiling their family peace with Shristi. She says he is Shekhar. She warns him to stop getting into his babuji’s way. He asks her to explain her babuji to return his client’s land. She angrily warns him if he does not like his extremities intact. Narad gets a call and informs Ragini that Parag met with an accident. Ragini panics and rushes out with him.

Vishu with Shristi sees court and says it is very big and asks if she protects law. She smiles and says yes. He says she looks so pretty smiling and says he can tell for sure that nobody can love her more than him. A romantic song plays in the background. They both enjoy shopping and each other’s company. They then wait for Anurag at a bus stop when a few goons flirt with Shristi. Vishu warns them to dare not flirt with his wife. They start misbehaving with Shiristi and they both run away. They follow and start misbehaving with Shristi.

Ring of Fire 5 March 2020 Update ends as Vishu confronts and fights with them. They hit Vishu and push him down. His head hits a stone and he collapsing severely injuring his forehead. People nearby see their fight. Shristi shouts for help. Goons see people coming and run away. People see Vishu injured and ask Shiristi to call car. She calls taxi and takes Vishu to hospital. Doctor says he has lost a lot of blood and needs transfusion.