Deception 14 February 2020 Update starts when Naren ask Pooja why she is upset and asks what wrong did I do? Pooja asks why did you give Surbhi’s chunari for me. Naren says now everything is fine naa, and says Phupha ji said that marriage functions are enjoyable due to friends and says he has no friends than her.

Deception 14 February 2020 Update: Pooja says she don’t have any interest in his talks and asks why did you refuse Surbhi for the cocktail party. Naren says he don’t want Yash uncle to waste money and says he has donated 20 lakhs to orphanage, and asks if she is happy. She gets Dr. Anand’s call and he asks her to come and see the party arrangements. He tells that he wants to invite Naren and Surbhi too and asks her to put call on loudspeaker. He invites Naren and Surbhi for party and asks her to remember the promise made to his wife. He refers Pooja as his wife again and again, and tells that he has invited Rahul and Mayank also.

Rakesh asks Mayank to forget Pooja and see a better girl around him. Mayank says he wants to hear Pooja’s answer. Neelima tells Rahul that Surbhi will marry him only and tells that they don’t need to do anything as Naren brought Pooja home. Rahul says he is mad about Pooja and Surbhi can’t bear this. Guruji tells Rakesh not to get tensed and says Surbhi will marry Mayank only.

Pooja comes for the party. Dr. Anand compliments her beauty. Naren, Surbhi and other guests come. Dr. Anand greets them and tells that he gave responsibility to malkin for today. He places his hand around her shoulder. Naren looks on. Piya re plays. Mayank comes there and eyes Pooja. Naren couldn’t stop his eyes off Pooja. Mayank calls pooja. Pooja asks when did he come? He says why you will see me. Rahul comes there.

Naren looks at Pooja. Dr. Anand holds Pooja and introduces her as his would be wife. Naren looks at them. Rahul tells Naren that they shall have party. Naren says in sometime. Surbhi asks Shilpa what she is doing in Dr. Anand’s party. Surbhi says she came here to keep eye on Pooja. Pooja asks if she wants juice. Shilpa asks her to drink juice and says she will have drink. Naren comes to Pooja. She asks what happened, why he is smiling. He says I am seeing you hosting someone’s party and felt strange. He asks if she felt similar thing. Pooja says she used to host in his house parties and now in her house.

Rahul asks Surbhi to have drink. Surbhi says she is not sure if Naren likes it or not. Naren comes and says he has no problem and she don’t need his permission to do anything. Rahul says they shall dance. Naren- Surbhi, Pooja and Dr. Anand dances in the party. Naren and Pooja look at each other. Pooja feels uncomfortable in Dr. Anand’s embrace. Partners are changed during dancing, and Pooja comes to Naren. They dance happily. Pooja keeps her head on his shoulder. It turns out to be Pooja’s imagination and she gets uncomfortable seeing herself with Dr. Anand, and goes.

Mayank comes to Pooja. Pooja gets wine smell. Mayank asks shall I crack jokes being maskara. Pooja asks what you are saying. Dr. Anand comes and says we shall have a drink. Mayank asks him not to waste tie and says he is maskara. Naren comes there and apologizes to Dr. Anand as Mayank pushes him. Rahul takes Mayank from there. Naren asks Pooja why she didn’t refuse Dr. Anand when she is not comfortable with him, and says today he is feeling as a guest, and asks if she is happy with Dr. Anand. Pooja says she is very happy with Dr. Anand and smiles. Shilpa and Surbhi see him with Pooja. Surbhi asks Naren to come.

Shilpa asks Pooja what is in her that Naren gets attracted towards her. Pooja says you are thinking wrong. Shilpa asks her to share her secret. Surbhi comes and takes Shilpa with her. Dr. Anand asks Mayank to relax. Pooja hears their voices and runs to them. She scolds Mayank and asks him to come with her. Mayank says you are kicking me out of party and asks what is in that Dr. Anand which this Maskara don’t have. Pooja asks what he is saying? Mayank says I love you. Pooja is shocked.

Mayank ask Pooja why did she trap him in her love, when she wanted to trap others. Pooja asks what you are saying? Mayank says you are behaving innocently as if you don’t know that I love you. Rahul hears them and laughs thinking this is lottery jackpot. Mayank tells Pooja that Anand can’t love her like him and he will only marry her. He twists her hand. Naren comes there and asks Mayank to leave Pooja. He slaps him. He says when you can’t handle then why did you get drunk. Rahul says I will take him and takes Mayank from there.

He instigates Mayank against Naren and Pooja. Mayank says it is two side love and tells Guru ji told that Pooja loves him. He asks him to get her married to Pooja and cries. Rahul thinks he will marry Surbhi. Pooja bandages Dr. Anand’s hand. Dr. Anand asks her to leave her else he will fall in love with her more. Naren looks at them and jogiya plays……Dr. Anand asks him to come. Naren apologizes for Mayank’s misbehavior.

Rakesh shares his plan with his men and thinks Harish, your happiness will be gone. Rahul brings Mayank home and tells Harsha that Naren slapped him without knowing that Mayank loves Pooja. He says last time he brought police home and don’t know what will happen now. Rakesh hears him. He tells Guru ji how dare Naren to slap Mayank. Guru ji asks Rakesh to send him away. He says I will handle Neelima and Rahul. He says since Pooja is here, Naren and Surbhi are difficult to unite and it will be impossible after tomorrow’s bhoj.

Naren makes arrangements to make orphanage kids and blind people to have food. Yash gets glad and tells Supriya that he wants to help. Shilpa says they would have been embarrassed in their country. Surbhi says we will go home after marriage. Naren tells them that Pooja made sweet dish for children.

Pooja comes to talk to Mayank. Harsha gets angry and asks if she came to provoke her son, and asks what does she wants, money, jewellery..and asks her to stop making the brothers’ fight. She says for the first time, she has to choose between her two sons. She says if you attend Naren’s functions then I will not attend it. Naren comes to the kitchen, tastes sweet dish and thinks kids will be happy. Pooja comes back. Naren asks if she is worried about last night, and tells that they have sent Mayank to his chachi’s house. He asks her to feed the children.

Guru ji asks Neelima and Rahul to get involved in the marriage functions and says nobody will know when will the sehra shift to your head from Naren’s head. Neelima asks Rahul to do as he said. Naren serves food to everyone and asks Supriya where is Pooja? Supriya says she must be getting ready.

Dr. Anand’s mum and Kusum make arrangements to feed Brahmins. Dr. Anand’s mum warns Pooja not to go to that side and tells that they have invited widows and I don’t want widow’s reflection to fall on my daughter in law. Kusum says why she will go, seeing Naren she panics and takes Dr. Anand’s mum inside making an excuse. Pooja asks Naren to go and says I can’t come as Brahmins are coming. Naren says you have made sweets and will get blessings. Pooja says she has wasted much time and will not come, and asks him to return. Naren gets angry and asks her not to waste her time for him. He thanks her for making sweets. Jogiya song plays….he goes. Pooja thinks she has done this for their betterment.

Deception 14 February 2020 Update ends when Supriya, Harish and others serve the guests. Naren asks Supriya to bring sweets from kitchen. Pooja, Dr. Anand and Anuj serves to Brahmins. Guru ji comes to Pooja and says you made nice kheer, but whoever will eat it, will curse you after landing up in hospital. A fb is shown. He adds poison in kheer and mixes it. Pooja is shocked. 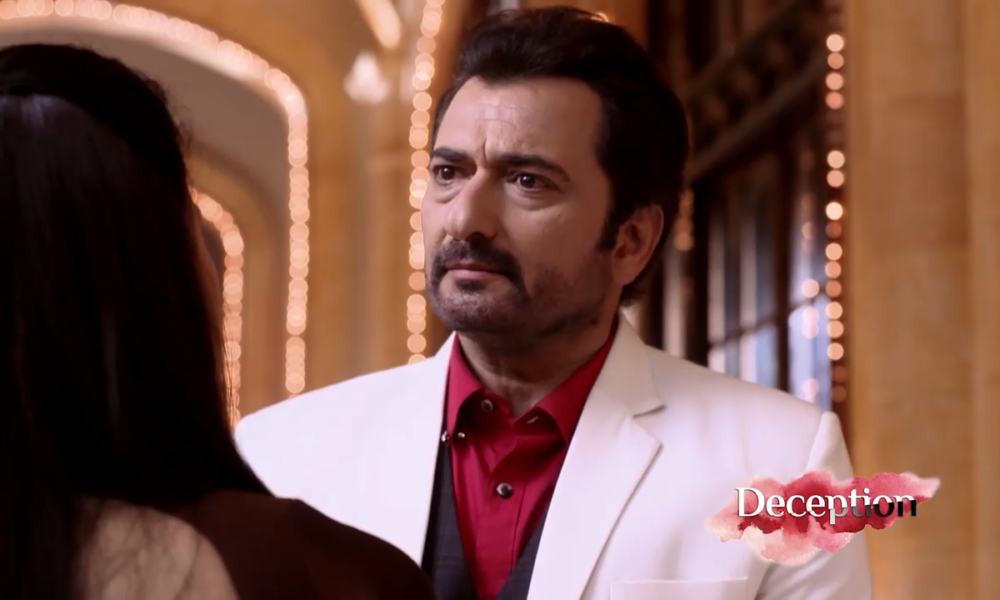