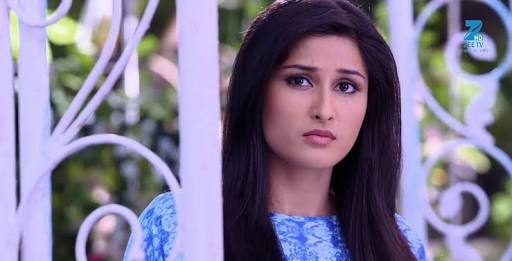 Deception March 1st 2020  starts with Pooja thinking nobody can harm Naren now. Naren asks her to let her tears have rest for now. He holds her hand and says only happiness will be there in your life, but before that justice needs to be done with some people. Pooja nods. He turns.

Rahul thinks this jogi have become smart, where did he hide in this darkness and says I will not leave him. They are shocked to see the video on projector screen in which Rahul threatened Pooja and made Naren and Pooja signed on the papers, and accepting his crimes of burning farmhouse and getting him arrested in drugs case.

Naren says mirror hides pictures sometimes and shows it clearly sometimes. Guru ji also looks on. Pooja and Naren comes downstairs while there is still darkness. Naren says you were so over confident that you didn’t look at the camera hidden in the shirt button. He says colony kids want donation and asks them to put some humanity in the charity box, if not money.

Rahul says why you are becoming justice pujari and asks him to take advantage of darkness, and says we shall share the money equally. Neelima asks Naren to agree and says once we get the money, we both families will separate. Rahul asks him to give video inexchange of half wealth and says you are not less than a God. Guru ji switches on the lights. Rahul, Neelima and Hardik see Supriya, Harish, Harsha and Surbhi coming there.

Pooja walks in just then. Naren says I asked why you are always over confident and says we have proofs and now we got statement also. Pooja gives the proofs to Inspector. Inspector says you are under arrest. Inspector says we have warrant against you three. Hardik and Neelima are shocked. Naren says I forgot to clarify that three accused will be punished. Neelima asks Harish to stop Naren and says afterall we all are one family.

Pooja says when this house elder son have decided, let him fulfill his responsibility, and you accept your punishment. Harish tells Hardik that he didn’t know that he hate him so much and asks Inspector to take them from home. Neelima asks Surbhi to say something and says if your husband or inlaws don’t stay here then what will be your value.

Naren says Surbhi’s responsibility will be his top priority. Surbhi thanks him and says you are an example of friendship. Police arrests them. Rahul turns, says you wants humanity in charity naa, and throws vase on Naren’s face hurting him. Police takes them away.

Harish cries seeing Naren injured. Supriya asks him why is he stopping his heart. Harish blesses Naren and says I am proud of my son. Naren stands up and hugs harish. Supriya says when everything is fine, then I don’t understand why attacks are happening on him. Pooja gets tensed.

Naren says nothing can stand infront of Pooja. He says she is not much educated, but I have learnt life from her. He says he was always saved by her. He says he can give his life, but not Pooja’s support. Pooja asks him to come to room and rest. Harish signs him to go. Pooja and Naren hold hands and go to room. She recalls his words and of Satish’s words. Surbhi tells Supriya that they have a good heart.

Harsha says you are standing with family, although so much happened with Rahul. Surbhi thinks she can sacrifice 100 Rahuls to get life partner like Naren. Deception March 1st 2020 Zee World Update

Pooja picks Satish’s call. He asks are you fine? She cries. He says this is difficult time, but since your mission is fulfilled, you have to leave from here. He asks her not to fall weak. Pooja cries and says yes.

Guru ji calls Rakesh and calls him Bandhu. Rakesh asks him to come to point. Guru ji asked if he is worried to go to jail, and says if I can help Vyas with my good deeds, then I can ruin you also with my Siddhis. He asks him to mend his ways else Naren will not leave him. Rakesh thinks to do something to Naren. Pooja thinks they got connected with each other, but destiny don’t want them to be together. She says they are bonded by emotions, and she has to go away from him for his safety.

Naren tells Pooja that there will be only love between them now. Pooja hugs him and gets teary eyes. Naren gets a call and he goes to attend it. Pooja thinks she can’t cry aloud and thinks they can’t unite like Radha and Krishna. She hears Naren talking to his employees and saying that Harish will join office tomorrow. He asks him to distribute sweets to everyone. Guru ji asks Pooja not to hide anything from him and says that she has stood by Naren and fought for him.

He says you are a janni and can do anything. Pooja asks if there is some solution for her dosh. Guru ji says there is a solution and asks him to take all dosh on herself which would be for Naren. He says a wife will do this for her husband in history for first time. Pooja says she is ready. Guru ji asks her to get ready at 6 pm for the tab/test. She thinks may be after this tab, I don’t need to go away from Naren. Naren asks Pooja, can I decorate your hairs with flowers. Pooja nods.

Naren says I couldn’t give you time after marriage and promises to compensate for every moment which he couldn’t give you. Pooja says from you do you bring so much love and tells him that due to her mannat, they have to wait till Gauri visarjan. Naren tells her that he will wait till she asks him to tie flowers in her hairs. Supriya hears them and thinks what she is talking about?

In the morning, Pooja wakes up and finds the gift from Naren. She opens the gift and sees her mum’s jewellery which Naren got repaired for her. She reads his letter, Naren writes that she must have started crying and asks her to get ready for another surprise. Naren comes.

Pooja says she never thought she will see her mum’s jewellery again. Naren says I know it is precious for you and asks her to sit. He makes her wear ear rings. Jogiya song plays…..Naren says now I have to rectify my last mistake, and says he needs to punish himself.

Naren tells Pooja that he wants to take her to Europe for outing and makes her meet Travel agent. Surbhi comes there and says your Mama sent travel agent, you didn’t tell that you are applying for American visa. Pooja and others are shocked. She recalls telling Mama that she wants to go to America far away from Naren and join dance academy there. Satish says he is proud of her. Deception March 1st 2020 Zee World Update

Deception March 1st 2020 Naren says now I understood that she wants to surprise him, and tells that they will go to America now. He asks Supriya to come to office along with Harish. Supriya says ok. Satish is worried for Pooja. Kusum asks him to say what happened? Supriya asks Travel agent to tell about Pooja applying visa. Travel Agent tells that Satish asks him to apply job visa for her. Supriya is shocked.