Anika asks Shivaye to get ready, he has to give a speech. He says I told you, I won’t do it. She says I m not like those wives who trouble husbands. He asks what’s going on, you agreed to me so easily. She says I have been requesting you, fine, don’t give the speech, you can get ready and come down for my sake. He says no one needs me, Omru won’t be happy seeing me, everyone will be there, it won’t be right for me to go there. She says you have to face them, you can’t stay confined, please come for my sake. He says fine, but only for a while. She asks him to get ready fast. He checks a bag and asks where is all my stuff.

She smiles and says I threw it. He asks with whose permission. She says I m your wife, I have this right, wear this suit, this color will look good on you. He recalls Tej’s death. He angrily throws away the suit. He shouts I don’t want to wear it. She holds him. She says I can’t wear that suit. She says fine, wear some other suit. He says Shivaye who used to wear suits is dead, I m not that Shivaye. She says fine, you can wear a shirt, right. She gets a shirt and says please wear it, for my sake. Game of Love 03 October 2019 Update – StarLife Series

Bhavya comes to Rudra and says come, everyone has arrived. Rudra says I will just come. Shivaye wears a shirt. Anika says this style is cute, but please tuck in the shirt. He does it and comes. She smiles and says well done, let me style your hair now. Her earring gets stuck to his shirt collar. They have an eye lock. Music plays…. He frees the earring. She gives him a watch. She looks for the speech. She says I kept it here, don’t know where did it go. He says I don’t have to give it, lets go. They leave.

Om thanks Dadi for coming. Dadi says when Tej isn’t here, how will I like to come here. Om says we will remember dad with happiness, come. Reporters click pics. Shivaye and Anika come. Reporters start questioning Shivaye. They ask if he will handle the Oberoi empire again. Shivaye turns to leave. Rudra sees the speech and says now I don’t need it. He burns the paper and says its time for action. Dadi lights diya. Dadi says thanks for coming, Oberoi industries was just my husband’s dreams, my sons laid the foundation, my grandson Shivaye turned this dream true. Shivaye looks at her. She says my grandsons Omru, but this would have not been possible without your hardwork, we are lucky that you have become part of our family. Everyone claps.

Anika asks won’t you give speech. Shivaye says don’t expect more from me. She says your place is there. He says I know my new place and new identity. Om says I thank you all for joining us in Oberoi industries, founders day, we are giving the speech since last 5 years, this year Rudra will give the speech. Reporter asks where is he. Om signs Bhavya. Om says wait for a while, I will go and get him. He asks for Rudra.

Bhavya says I couldn’t find Rudra anywhere. The reporter asks what’s happening, no one is here to give speech. Anika says media just needs a chance, you can shut them up Shivaye. The reporter asks who will come to give the speech. Shivaye says wait a min. Reporter says I think Shivaye will give speech today. Shivaye says Dadi, I didn’t wish to give speech, but its about family respect now, bless me. Dadi blesses him.

Shivaye goes on the stage. Anika smiles and wishes him all the best. He says stop clicking the pics. He sets the mic and starts with dear all, I want to say…. Om removes the mic connection. He gives the mic to Rudra. Rudra gets on the stage and makes Shivaye behind. He says I will give the speech, a murderer won’t represent Oberoi family. Shivaye looks at him

Rudra gets on the stage and makes Shivaye behind. He says I will give the speech, a murderer won’t represent Oberoi family. Shivaye looks at him. Rudra says you are still standing here, do you want to get insulted further. Shivaye gets down the stage. Rudra begins the speech. He says Shivaye’s words. Shivaye and Anika look on shocked. Rudra recalls stealing the speech. Anika says its your speech Shivaye. Shivaye and everyone clap for Rudra. Om hugs Rudra. Anika says it was your speech.

Shivaye says now its of Rudra, I have waited for this moment since years, Rudra has grown up today, did you see how confidently he delivered the speech, we used to call him cry baby, I would have not given the speech so well. Anika says you are really good, so you just see goodness in everyone. She cries. Om and everyone come to Rudra. Bhavya says everyone was impressed with the speech.

Priyanka says you said so well like Shivaye, did you write the speech yourself, it was good. Anika and Shivaye come. Rudra asks did you come to take credit or to cry that I have stolen your speech. Game of Love 03 October 2019 Update – StarLife Series

Gauri asks what. Bhavya asks was it written by Shivaye. Rudra says yes, I didn’t do this as our speech wasn’t good, I did this as I wanted to give a shock to someone. Shivaye says I m happy that you have delivered the speech, I m just here to congratulate you, there could be nothing pleasing than this, that his younger brother is doing better than him, you gave me big happiness, thank you Rudra. He goes.

Omru look on. Shivaye and Anika lie to sleep. Shivaye opens eyes and recalls shooting Tej. He tries to strangle Anika. She struggles for her life and pushes him. She coughs. He gets shocked and says forgive me Anika, I m sorry. He gives her water. He says I don’t know what happened to me, I wasn’t aware, don’t come near me, leave me, don’t touch me, go, I have just given you pain and troubles, you don’t need to keep this marriage, I free you from this relation.

She says I can’t live without you, calm down, I m fine, look at me, I m okay. They cry. He says sorry. She says I understand, its not east to recover. He says don’t suffer for my sake. She says I have a right on your happiness and sorrow also, I m not going to give it up so soon. He says what I just did. She says forget about it as a bad nightmare, no problem can defeat my Shivaye. He says you have much faith in me.

She says if you see yourself by my eyes, you will start believing in yourself, I m fine, lets sleep. He says you are not fine. He gets first aid kit and does aid. He says sorry, I will keep saying sorry till you get fine.

She says I m fine, where are you going. He asks her to sleep. He goes out and says I m doing wrong with Anika, she thinks this phase will pass, the Shivaye she is waiting for is dead, I can’t give her false hope, if she stays with me, she will just save problems, I have to do something to save her. Its morning, Anika coughs.

Gauri asks what happened. Anika says nothing, I had ice cream yesterday and my throat got sore. Shivaye looks on. Anika coughs and says Shivaye and I sat at poolside, under the stars, it was romantic, I caught a cold. He recalls what he did and goes. Om comes. Shivaye greets him. He asks are you angry on me, vent it out, scold me, slap me, but talk to me. Om says we can vent out anger, but not hatred, there is nothing left between us except hatred. He goes.

Priyanka throws a vase. Shivaye sees her scolding the maid. He asks what happened Priyanka. He holds her and says staying out all the night, partying, drinking, my sister wasn’t like this. Game of Love 03 October 2019 Update – StarLife Series

She says my brother wasn’t like this, I was Shivaye’s sister five years ago, now Priyanka is the one, whose mum killed her dad, whose brother killed her uncle, Priyanka is a murderer’s daughter and sister, I m ashamed that you are my brothers, I take drugs as I don’t remember anything. She cries and says don’t touch me, you got released from jail, what about my punishment, I wasn’t like this, I have become like this because of you. He says forgive me.

She shouts get out and pushes him out. She cries. He looks on and goes. Bhavya asks what happened to you. Anika says nothing, just some rashes. Bhavya asks what kind of rashes. Shivaye comes to his room and switches off lights. He pulls on the curtains and sits in darkness. He recalls Priyanka, Pinky and Rudra’s words. 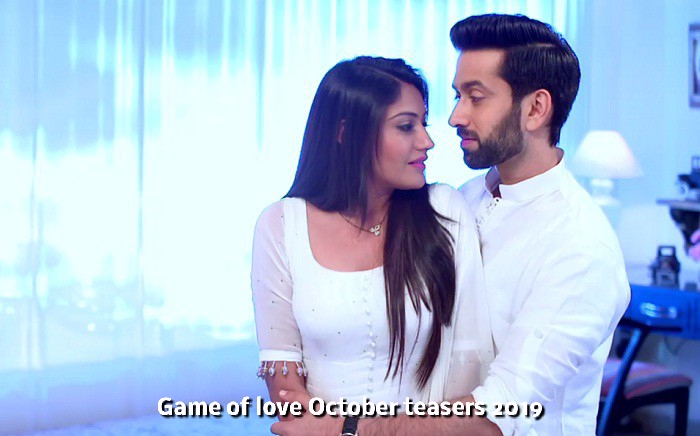