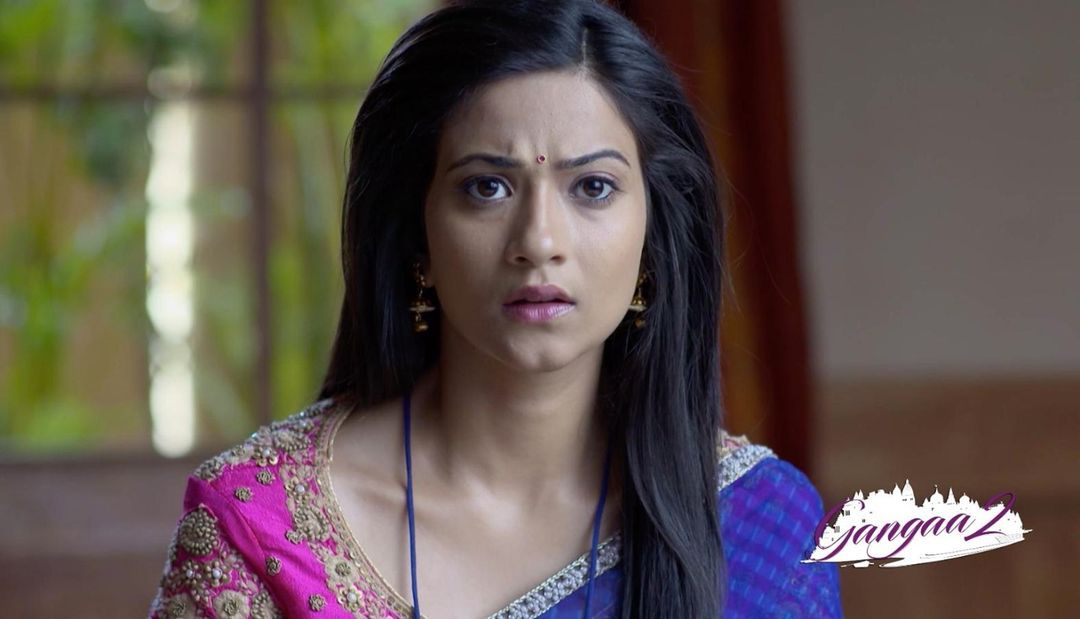 The wives are seated, while the men are blindfolded. Sagar feels her face while applying cosmetics. He put the sindoor that makes Ganga cry. Pulkit had turned Supriya to joker. Sagar is the first one to be done. They all laugh watching Supriya, Pulkit holds his ears in apology.

Sagar notices Ganga had been crying. Niru announces Sagar as a winner and accepts he wouldn’t have done this. Ganga leaves the room. Ganga is crying in the room in front of mirror. Sagar comes to ask what happened. Ganga confirms if he doesn’t know, Sagar inquires what the matter is.In the room, Madhvi says she can see everything getting well. Niru says its not yet done, they both are stubborn and need to get rid of their ego.

Ganga says if Sagar really doesn’t want to understand, she has nothing to say to him. Sagar thinks he only wants to hear three words from her, that she still loves his Sagar. Ganga removes her bangles and turns to leave. Sagar says if she doesn’t want to say anything, why wait for all these games. He should then leave tomorrow night, tickets dates can easily be changed. He bites his smile, as Ganga seems worried. Niru says now he would do something they won’t even consider. Sometimes, one has to be strict to bring stubborn children to right path.

In the hall, Ganga was upset why Sagar doesn’t consider his decision again. He is stubborn and doesn’t care about anyone else’s emotions. The children come to insist Ganga play hide and seek with them, she agrees. It was Ganga’s turn to chase, she shuts her eyes for a countdown and get flashes of Krishna drowning in water. She screams Krishna’s name, then looks for her around and hugs Krishna. She tells Juhi to go to her room as well, and takes Krishna inside.

Kashish calls Juhi into her room. Juhi asks if she was playing games on mobile. Juhi complains her mother doesn’t let her play on mobile. Kashish hands her mobile to Juhi to play her favorite one. Supriya comes calling Juhi to sleep. Juhi requests time to finish the game.

Kashish asks Supriya to let Juhi stay here. Supriya says Juhi is already being ruined, one must take care of kids and Kashish will only know when she has her own. Juhi was excited to hear about the coming baby. Supriya takes her to sleep. In the room, Ganga lay with Krishna on bed, wondering how she should stop Sagar. Pulkit comes to find Supriya sitting sleepless.

Supriya shares with Pulkit about what she said to Kashish and she must be hurt. Pulkit says he never thought she has a soft corner for Kashish. Supriya agrees what Kashish is doing is difficult, she would never have the guts to sacrifice the way Kashish is. Pulkit thanks Supriya for handling everything so well. Supriya wonders what she should do now, Pulkit says she should say a sorry to her and everything would get well.

There, Sagar comes to the room and wonders where Ganga is, is she upset by what he said about leaving for London. He comes to Krishna’s room and finds Ganga and Krishna sleeping there, then pass a flying kiss to Krishna and kiss Ganga’s head. In the corridor, he thinks what if Ganga doesn’t stop him tomorrow and doesn’t say what he wants to hear, then? Should he go? He wonders if he should tell her that he was only making her worried, and testifying her love.

Gangaa Tuesday 19th January 2021 Zee World Update He wanders around, confused and decides he can’t go to London. Madhvi comes there, and asks what happened. Sagar says he is just sleepless, Madhvi says she is also sleepless then offers him tea. Sagar lights fire outdoor, while Madhvi gets tea for them. She asks Sagar if he is fine, as he seems to be tensed. He denies.

Madhvi says she is really tensed, she had fight with Niru because he doesn’t have time for her even here. Sagar laughs about it, then asks if she can stay without talking to Niru for a single day. Madhvi smiles, then gets upset at the thought of spending 7 years without him. She realized there what importance he holds for her. Most of the time, when spouses are with each other they become a vital part of each other, their absence make us incomplete; does he think so. Sagar silently agrees, maybe. Madhvi smiles.

The next morning, Maharaj ji receives a call and promises to come as soon as possible. He is aware Ganga is alone, he will speak to the family and inform when he can come over. Sagar thinks about placing the ticket on Ganga’s table. Krishna and Juhi coming running and hits Sagar, Krishna reads the ticket and questions Sagar about it. She runs behind in anger. Sagar agrees to share with them.

Ganga was just coming out of her room. Sagar tells the girls he isn’t going anywhere, he is creating this drama for Ganga. Krishna points towards Ganga just standing on the door. Sagar straightens up at once. Sagar says to Krishna and Juhi that the grass in the car isn’t the real one, and take them along.Kashish stops Pulkit in the corridor and stood with stuffed toys. She says when their child would arrive, she won’t be there to pamper him.

She thought about doing that now, and deliberately slips herself into his arms. Ganga watches them this way. Kashish explains she had slipped, and carries her stuffed toys. Pulkit takes the toys. Ganga asks Kashish why she is doing this, does she realize what effect this will have. Maharaj ji comes to inform Ganga she and Sagar need to go to temple, as per Niru’s call for the next round.

While walking towards the temple, Sagar thinks what he must do if Ganga doesn’t confess that their relation is the biggest reality of their life. He only wants a confession, but if she says in the temple that their relation doesn’t mean anything to her; he must leave for sure. Ganga thinks why is Sagar leaving her alone, doesn’t this marriage mean anything to him? Should she tell him this marriage means a lot to her, and he shouldn’t go?

She was about to speak to him, when a robber comes to loot on Ganga pressing her neck with a knife. Sagar was ready to give away everything, but when the robber asks for mangal sooter Ganga denies. Sagar insists on her to give it away, but Ganga argues that this is really dear to her, as it’s an identity of their marriage.

Sagar smiles, and says he never thought about going, he only wanted to hear from her that this marriage is true for her; he had to revenge her for teasing him. he hugs Ganga, while both laugh in elation. The family come there, Amma ji says this is what they had wanted.

The robber hands every looted item back to Niru, Sagar wonders what this all is. Niru says he had heard about him leaving to London, they all thought about the drama of competition. Madhvi questions them about fighting like kids. Maharaj ji comes there to inform Kashish fall off stairs.

At home, doctor observes Kashish. The doctor confirms if she is pregnant? She hands a test kit to Kashish to reconfirm, as she doesn’t have any symptoms of pregnancy. Kashish questions the doctor’s ability calling her a liar. She wasn’t ready to get a test. Ganga requests Kashish to get the test, when she is right. Kashish was reluctant and turn to leave the room, Ganga questions what is this childishness.

She urges Kashish to speak the truth. Kashis says she isn’t pregnant. Everyone was broken and questions Kashish for betraying them. Kashish replies to Pulkit she loves him dearly, she had no other option. She thought there is a single way to get him, as he would walk to her leaving Supriya. Gangaa Tuesday 19th January 2021 Zee World Update

Pulkit held a hand over Kashish, she insists on him to punish her for loving him. Pulkit says he hates her a lot and leaves disgusted. Amma ji scolds Kashish for being a betrayer. Kashish requests Amma ji to let her stay here, she has no place to go to. Ganga jerks her hand away, saying she had always been with her, and fought for her; but Kashish played with the emotions of her family. This time she can’t do anything for Kashish, she must leave this place.

In the room, Ganga was crying. Sagar places a hand over her shoulder. He says these tears are precious, and wipes them off. He won’t let her cry without his permission. She smiles, Sagar brings her to mirror and speaks to her about envisioning a beautiful future. Ganga turns to look behind and realizes it was a day dream. She was worried at once. Her head bangs badly, and fell down.