Kindred Hearts 24 October 2019 Update On Zee World – Bini touches Ambika’s feet. She says I called her. I was so confused but Rano made me believe that Bini can be our daughter in law. Bini says I wont disappoint you. I promise you that.

Arjun comes to his roomm. He sees that Akash isn’t there. Rano comes too. Rano says he isn’t in his room. Arjun says where is he? He isn’t picking his phone too. Ambika says call his friends too. Bini says till then I will make his favorite dish. I dont know how to cook though. I can see recipe on youtube. Ambika smiles. Arjun comes to his room and calls Arjun. He doesn’t pick. Rano rests her head on his shoulder. She says I am really worried.

At night, everyone is worried for Akash. Bini gets food ready. Arjun says his friends don’t know where he is. Akash comes home. Bini says he will be so happy to see me here. Everything will be good now. Akash comes in with Jia. They are in wedding attire. He says I and Jia have married. Everyone is dazed. Bini is shocked.

Akash says Arjun married Rano. We married too. Ambika slaps him. Akash says you don’t like Jia. i married her anyway. arjun is shocked. Akahs says Jia come in. Ambika says stop there. This girl can never be accepted in this house. Akash says I don’t wanna live anywhere where my wife isn’t respected. Lets go Jia. He says I will always stand by her.

Ambika says go and leave this house then. Jia says see Akash.. She only cares about Arjun and his wife. You said your ma loves you. Akash says I was wrong. I can see how she is now. jia says I am here for you. Lets go. Ambika says stop.

Ambika says rano bring the arti. Rano brings arti. Ambika says don’t be happy. I haven’t accepted you. My son made a mistake and I wont make another one. You can’t take me away from my son. bini says how dare yoou akash. And Jia you took everything from me. You always come between two lovers. Jia says we can’t change anything. Bini says you have no shame. Now see what I do to you. I will ruin your life. Kindred Hearts 24 October 2019 Update…

Arjun says I am ashamed I loved a woman like you. Akash says she is my wife. Ambika does their arti. She goes to her room. Ambika says I haven’t accepted you as my daughter in law. Don’t think i can ever own you. I don’t wanna go away from my son.

Jia comes to her room in tears. She says arjun must have felt so bad. He was so upset. Akash says this plan will work don’t worry. He says don’t cry. We have to expose rano at any cost. Rano comes to ambika’s room and says Jia is back in this house as Akash’s wife. Will that be okay? Ambika says don’t worry. I know what your rights. I did this for you. Rano says for me? Ambika says I know Arjun hasn’t accepted you completely.

I want arjun to see Jia’s reality and forget her completely. When he sees her going ahead in life he will go ahead too. I have to accept her for you. Rano says accept my foot. I meant.. The way you have accepted Jia please accept my apology. Forgive me. Ambika says don’t say all this.

Ambika says I can do anything for your happiness. Thin about your life and Arjun not them. I will handle them. Rano says let me make you chaat. Ambika says if Akash loves Bini why has he married Jia? Rano says I have to do something to kick that Jia out.

Arjun says has jia done this to take revenge for me marrying Rano? how could akash do this. He isn’t a kid. Rano comes and says I can’t understand that either. He says I want to be alone. Rano says dont hurt yourself. RAno says how can Akash and Jia marry each other. Arjun says please go from here. Rano says they are not married. I think they are fooling us.. He says Rano go frmo here. Rano says come i will show you how this wedding is a lie.

Jia is crying. she says you caan’t imagine how i controlled my emotions. Akash says you are doing all this for your love. Jia says yes we have to be strong. We have to help each other. Arjun says what are you saying? Rani says I want you to be happy. Come and see with me.

Arjun and rano come downstairs. Akahs says we have to pretend that we are not married. Jia says what about bini? She is hurt. Akash says we need to keep it hurt from bini. We can’t take risk of hiding from her. Jia says what about the lies. He says this lie is for the better. Akash gives high five.

Arjun comes. jia says they have no manners. They come anywhere without permission. Akash says we need privacy. we are married. He closes the door. Arjun says to Rano you brought me here. Shame on you. Jia and Akash laugh. Akash says i will sleep on the sofa. She puts cushion in between and says you can sleep on your side. I trust you. What if Rano or arjun come. We have to be prepared.

Next morning, Jia comes to kitchen to cook. rano says you are here with this drama. Jia says why is it hurting you? Arjun filled your hairline but did he own you? no? Rano says forgot how arjun kicked you out of this house? Jjia says you can never have a place in his heart. I heard he was scolding. He was very angry. Jia says this racket kills lie. Rano says you fake wedding will be exposed soon.

Jia and Akash come to table. Arjun sits. jia says I made this tea for your akash. She makes him drink. He says its so good. Arjun is jealous. Arjun burns his hand. rano says show me. He says I am fine. Akash sends first aid. Rano says you can’t win Arjun from me. Akash says lets go Jia. Rano says something to Ambika. Ambika says as Akash’s wife. I wont do anything for her. Rano says we have to do this for society. We have to show them our rituals. Ambika says okay.

Akash says to Jia make your tea yourself. Never make for me. Jia says it was so good. Akash says ask me.. Jia hits him with cushion. Akash looks at her. Jia says what happened? he says nothing. Birju says mai has called you.

Ambika gives Jia necklace. Akahs says why this. Ambika says di you ask me before marrying her? This is our ritual. Today is her munh dikhai in evening. Wear this. And wear decent clothes. Rano says I will dress her.

Karuna welcomes everyone to munh dikhai. Bini comes. Everyone is dazed to see her. Bini touches Ambika’s foot. She says I know I am nothing related to Akash but at least we are related. So I wanted to be part of this celebrations. Ambika says welcome. Rano says why is she here? Ambika says who called her? How did she know about it. Rano says she loves Akash. Ambika says I hope nothing gets wrong. More Updates On Kindred Hearts… 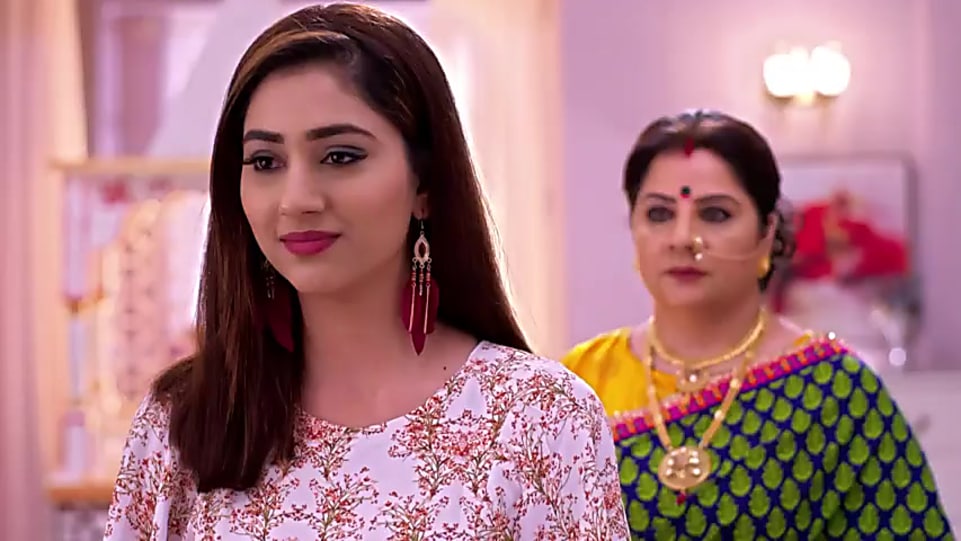