Sid is making the presentation to the Japanese clients in DD’s office . He takes them through the designs and keeps staring at the clock 🕦, as he has to reach the Garba competition venue soon. DD is worried because Sid looks distracted. She tells him to focus on the presentation!

Roshni is still at the dancing competition venue. She tries to call Sid, but his line isn’t connecting. Naani is worried that if Sid doesn’t arrive on time, Roshni will be broken hearted again. King Of Hearts 17 May 2019

Roshni watches in sadness as the other Couples take part in the dancing competition. She tries to call Sid again, but his phone is switched off. Naani watch her in sadness.

Roshni reminisces her childhood incident where DD did not attend the competition. Naani thinks once again, DD chose business over Roshni. Roshni drops the stick and walks out of the Venue. Her in laws, Naani and Mona try to follow her, but she leaves them behind.

Sid arrives home late at night and sees her sitting on the bed with her back turned. He is scared to touch her.
He calls her name and she tells him to leave her alone! He says he wanted to come, but was held up at work.
Roshni says this was why she didn’t want to participate in the first place! 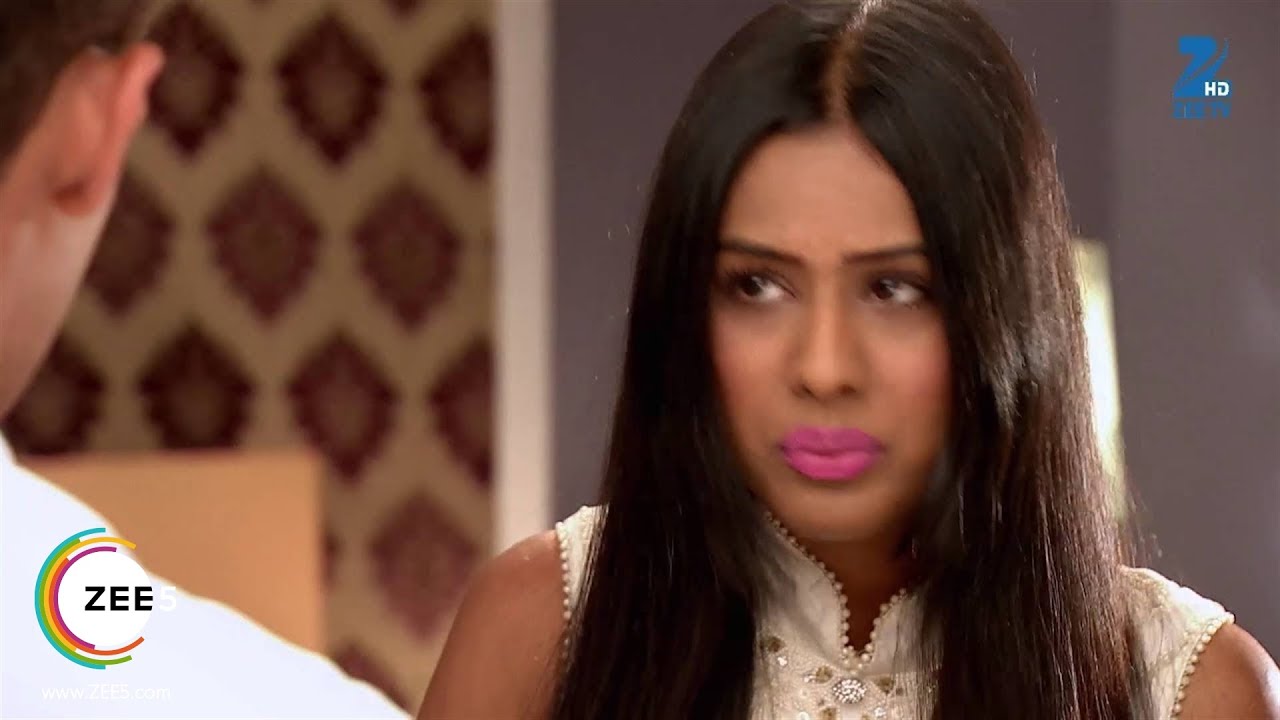 She asks why he bothered her in the first place! Sid begs her not to give up on dancing. Roshni cries vigorously, and says he did the same thing her mother did to her! He tries to apologise, but she yells at him to get out and leave her alone! He sadly walks out of the room.

DD sees him in the corridor and tells him that he will never fulfill his duties, and that the countdown has begun! He will have to leave her daughter very soon! Sid looks at her in shock and anger as she walks away.

Sid sits with his legs in the pool and remembers when Roshni told him he made her so happy in 2 days and her Mother couldn’t do that in 22 years! Roshni told him she craves for her Mother’s love and he promised her that he will give her that happiness and a family. He is in tears as he remembers Bablu telling him he is the only one that can bring DD and Roshni together. He remembers when Roshni sold all she had, to raise money for his bail and how she defended him against DD. King Of Hearts 17 May 2019

And when DD perpared food for her, and how she ate Sid’s prepared food instead. He also remembers when Grandmother told him that Roshni gave up dancing and he made her a promise that Roshni will be dancing this year.

Naani comes to meet him by the pool. She tells him that she knows Roshni fought with him. He says he doesn’t know what to do now?

She says what happened wasn’t very pleasant for Roshni; when hatred makes a place in a person’s heart then it will make it difficult for other emotions. Roshni has hatred for her Mother and it’s affecting her relationship with him. Sid says he keeps trying, but things go wrong.
Naani says she has seen what he has been trying to do since he arrived at the house. She says her daughter, DD sometimes talks down to her and taunts her about finances, but she doesn’t let it bother her because she’s her daughter and knows if she leaves her, DD will be shattered!

She says she has begun to see a ray of hope since he arrived at the house.
Sid says she’s the best! She begs him to try one more time to calm Roshni down. Sid says he knows it wasn’t Roshni’s fault, it was his, and he will make her forget her sorrows. King Of Hearts 17 May 2019
He tells her to watch and see how he will bring happiness back into the house!

In the morning, Roshni is in the room, making the bed. Sid enters and as soon as she sees him, she walks away. He goes to try and talk to her and she walks away again. Sid begs God to help him calm his wife down.
He walks up to her and says he’s sorry. He offers her some water to calm down. She collects the glass of water from him and pours it on his face. It was just his imagination and he concludes that it won’t work!

He goes to her by the wardrobe and holds her hand to his heart, and then apologises, but she slaps him hard. It’s his imagination again.
By the time he turns to look at her for real, Roshni has left the room. He runs after her and apologises for his mistake, saying he will never do it again! She asks if he’s not late for work?

DD enters the living room and tells Sid that he is welcome to catch a ride with them because she needs to give him a brief about today’s work! Roshni gets irked hearing that and walks out, while Sid still tries to talk to her.
DD says she will see him in the Car in 5 minutes!

At the Office, a female interpreter tells DD that the Japanese Clients prefer traditional Indian designs.
DD assures the clients that they will get the designs and traditional Indian hospitality as well. She asks Bablu about lunch and Sid enters the conference room with traditional Indian snacks just then.
DD asks Kesar what is going on!

Sid tells her not to reprimand them because he is the one responsible for it. She tells him not to ruin the presentation! Sid tells her to sit back and watch. Sid starts talking in Japanese. DD asks if he really knows Japanese or just mimicking? Sid says he is very talented and knows many languages than hindi and gujrati.
He tells the Clients that they have a brand new design for them that will blow their minds!

They seem to be impressed. The interpreter asks if it will be cost effective? Sid says if they can find the same design elsewhere, then they will give them free of charge. DD gets tensed hearing that. He tells them to enjoy the hospitality and the snacks because his dad says one does better business when his stomach is full.
DD tells the interpreter that she hopes they won’t cancel the deal?

The interpreter says Sid should just continue with what he’s doing because the clients likes it!
The clients stand up and makes a compliment.

DD asks what’s going on and Sid says they are happy because DD has invited them to attend a fun party.

DD tells Kesar to arrange Garba function and invite the best DJ in town and celebrities for the function!
Kesar says he’s on it. Sid follows Kesar out and stops him.

He says he knows the Japanese people care about family more than fame. He says he knows Roshni will not attend the party because she’s upset with him, so he has to tell the Clients that Mother and daughter does’t get along. Kesar looks worried.

Sid says he doesn’t know what to do anymore and he’s scared the deal won’t be finalised! Kesar says he’s scaring him. Sid says he’s just preparing Kesar for the outcome.
Kesar asks if he should make the arrangements? Sid tells him to go ahead. He looks and sees DD.

Sid is home. He tells Naani about the party and says it will be fun! Naani says Roshni is still upset with him and won’t listen to DD. Sid says the party will be mind blowing.
Resham overhears them and says it’s a party and she doesn’t have an outfit to wear! Sid looks up and tells DD that she has to get an outfit too; he hears that the Clients will love to meet all the family members at the party.

DD goes to her room to rehearse in front of the mirror how she will convince Roshni to attend the party.
Naani enters the room and DD says she doesn’t know how to convince Roshni to attend the party! Naani says she should have told Sid and he would have helped her! DD asks why she should ask him!
Naani says Sid has been trying to mend the rift between her and Roshni.

DD says he has created more problems! Naani says Roshni actually ate her food that night, and it was Sid who convinced her to eat her Mother’s food. DD says the food was tasty and she shouldn’t give Sid the credit!
Naani says she hopes DD will one day see Sid for who he really is.
DD says she will go and try and talk to Roshni!

Roshni is ironing Sid’s shirt. DD enters the room and says she wants Roshni to attend the party she’s planning tomorrow! Roshni ignores her and says she wonders what fabric the shirt is made of? DD says it is made of cotton! She asks for the answer to her questions!

Roshni almost burns the shirt, so DD takes it from her and helps her iron it.
Roshni thanks her and DD asks again if she will come to the party! Roshni says she doesn’t like people entering her room without her permission! DD says the party is important!

Roshni says yesterday was also important and DD didn’t attend, she also didn’t allow Sid to attend, then her wedding, that was also important, she, DD, didn’t show up as well!
DD apologises. Roshni says she won’t come because she knows her presence tomorrow won’t mean more than a business arrangement for DD! King Of Hearts 17 May 2019 Update