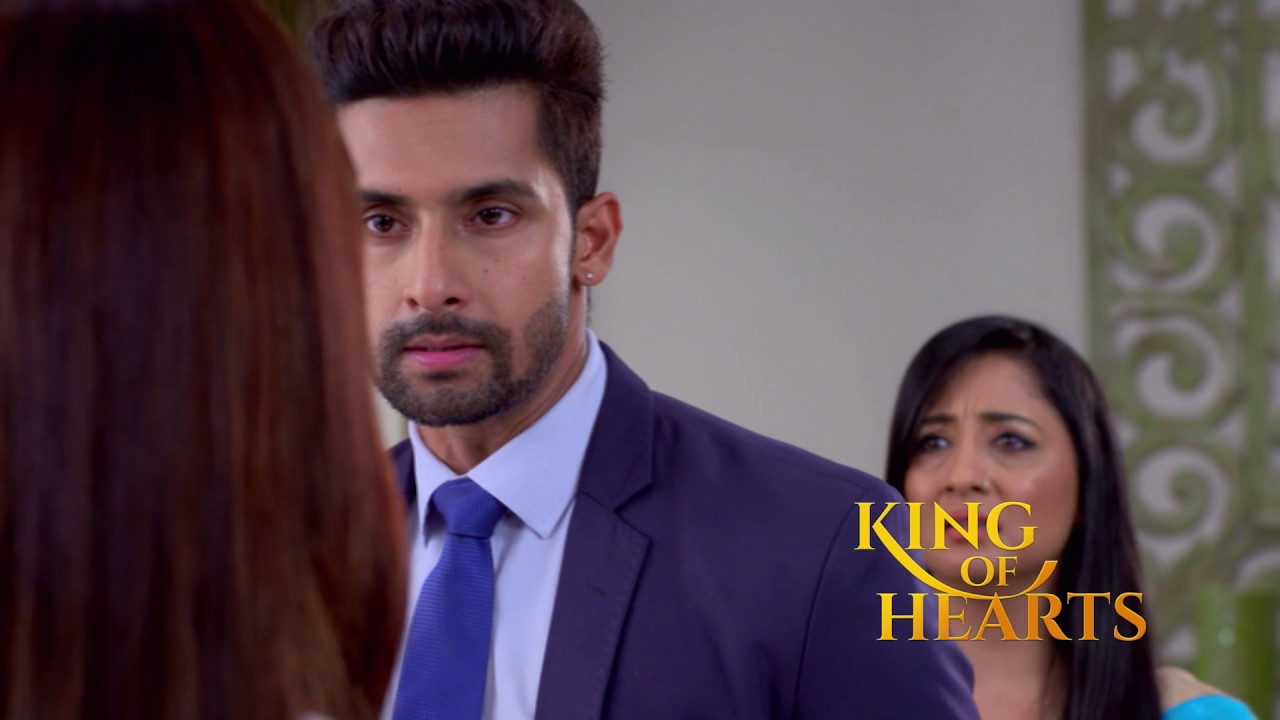 King of Hearts 24 November 2019 Update – Sid asks Anya who the lady is? Anya calls her ‘Mum’ and they hug each other. Her Mother is happy to have her back home. Anya asks her what’s wrong? Her Mum says she’s fine. Sid greets Anya’s Mum. Anya is about to tell her Mother who Sid is but her mother doesn’t let her finish. She thanks Sid and introduces herself as Naina Devi.

She says they were worried about whom Anya got married to. The other lady who is Anya’s Aunt says Sid is now their Son-in-law. Sid is confused.

Anya whispers to him that he caused the confusion by saving her life, now her Mother thinks he’s her husband. Sid wants to clear the misunderstanding but he’s not given a chance. Naina brings out the platter to welcome him and it falls to the ground. Anya’s Aunt says it’s a bad omen. Sid bends to pick up the platter but a male hand stops him. A Man who is Anya’s Uncle tells him that they have Servants to help pick up stuff. He berates Anya for causing her Mother a lot of headaches.

Sid tries to explain again but he gets interrupted. He tells Anya to explain. Her Mother says Anya’s brother Neil, will soon be home. She tells Sid to consider his in-laws’ house as his house. Roshni/Ragini is at work. A Doctor comes to attend to the cut on her forehead.

Kesar tells her to go to the hospital. She says it’s not that serious and she has to get a presentation ready. A Man arrives and everyone in the Office appears to be in awe of him.

He enters Roshni’s Office and closes her laptop. She is about to tell the person off. She sees he’s the one and they stare at one another. She tells Kesar that it’s Neil’s and she’s sure the women must be falling over themselves for him but she doesn’t see what’s so special about him. Neil says he doesn’t want her to give him excuses.

She says she knows he would ask what she’s doing at work. Kesar and the Doctor leave. Neil says he doesn’t know why people fear her so much when she can’t even take care of herself and he doesn’t know how she would look after his business?

Ragini says he impresses the women with his one-liners but he hasn’t impressed her and if she leaves, he would have to look after the business on his own and she can’t afford to let him ruin it. He tells her to go home. Ragini looks worried. Neil says he knows she doesn’t consider any place her home, and that’s why she’s in a hotel but she can come over to his place.

Ragini asks where Anya is? Neil says she’s back home with the guy she eloped with. Ragini tells him to give her a break as she’s only 20. Neil says his Mother was worried to death. Ragini asks who the Man is?
Sid is upset that Anya didn’t clear up the misunderstanding. Anya asks how she can tell them? Anya’s Uncle asks Naina if she knows whom Anya’s husband is; Sid Khurana, Mumbai’s biggest playboy.

Anya asks Sid if he wants her to put her Mum through another heartbreak by taking her life? Sid asks if taking her life is the solution? He asks for her brother. Anya says he’s against non-traditional marriages. She begs Sid to just pretend to be her husband.

Naina tells her brother not to take what the media says seriously because they also said things about Neil. The doorbell rings. Kesar is at the hotel. He is shocked to see Simran. She is equally shocked to see him. He tells her he has come to do some work. He sees Roshni approaching them. He quickly takes her away before Simran sees her.

Neil gets home. Sid introduces himself then stretches out his hand for a handshake. Neil introduces himself but doesn’t shake the hand. He says his Sister is very young, only 20. Sid says he’s 28 and doesn’t know what age has to do with anything. Anya tells Neil to give it a rest. Neil asks her if she didn’t think of their Mother! Sid tells him not to blame her.

Neil says she’s his Sister so he can talk to her! Sid is about to explain again but Naina interrupts and tells Neil that they should host a small party for Sid and Anya. She tells Sid to allow Anya stay home for some days. Sid is only too happy to let her stay. Anya says she will walk Sid to the door. They get outside and Sid says he can’t believe what’s going on. Anya says he was the one who saved her life so he needs to deal with the consequences. He asks for the details of her real boyfriend so he can find him. Her Aunt is watching from the window.

Neil is having Coffee with Ragini. She asks for the name of Anya’s husband. Neil says he’s an infamous playboy who has a different girlfriend every week. Ragini says she’s sure there must be something about the guy for Anya to have chosen him. Neil opens a photo of Sid on his Phone and gives it to Ragini. As she collects it, someone walks past and bumps her hand. The Phone falls to the ground.

Ragini picks it up. She sees a Man staring at her and asks him why? He turns away. She takes the Phone and sees a different photo. Neil goes to the Man that was staring at her and beats him up. Ragini tells him not to.
Sid is with his father in the Office. Raj asks why he didn’t just tell Anya’s family the truth? Sid says he had to stop her from doing something drastic.

He looks out of the window and remembers DD. He starts crying and says he is unable to stand heights from tall buildings ever since DD died and he doesn’t want another person to die because of him. Raj consoles him and tells him to come and look out of the window. Sid tries but says he can’t do it.

Raj says if DD had seen him in this condition, she would understand. He says the most difficult thing for a father is seeing his Son give up on life. He tells him to do whatever he wants to do and he would be with him and he knows life would give him a second chance.

Ragini cleans Neil’s wounds. She asks who he was trying to impress because she wasn’t impressed! She says she has not really seen him lose his temper like this before. He says when someone tries to harm the people he loves, he behaves this way. Ragini asks what he means by love? He says the way the Man was staring at her was wrong. He begs her to come to his house because his mMother has been asking of her. Sid gets a call from Anya. The information she gives him shocks him. He tells his father that his Mother is in Anya’s house. Raj is also shocked.

Naina offers Simran sweets. Simran wonders what the occasion is? Naina says their Children got married. Simran is surprised. Anya walks in and she’s surprised to see Simran. Simran hugs her and asks why she had to get married secretly when they would have gladly had a grand Ceremony for them? She gives her a set of bangles. Anya is surprised.

Simran gets home and Sid asks where she went? Simran says if she hadn’t gone to Anya’s house she wouldn’t have known Anya and Sid were married. Raj pretends he doesn’t know the truth. Sid says he can explain the truth.Simran says Anya is her daughter-in-law and she even gave her her wedding bangles. Sid and Raj are shocked.

Ragini comes home with Neil. His Mother fusses over the wound on his face. Neil says he’s a big boy and can look after himself.
Anya comes to greet Ragini. She tells Ragini that Neil is still upset with her. Naina says Anya’s Mother-in-law was around and even gave Anya a present. Neil asks how she allowed them get married? Naina tells Ragini to look at the bangle on Anya’s wrist. Ragini recognises it as DD’s design. Naina talks about having her own daughter-in-law as well to give a bangle. Neil tells her to stop it! He asks Ragini if she doesn’t have a meeting? Sid is waiting in Ragini’s Office. Roshni is walking to her Office. King of Hearts 24 November 2019 Update