King of Hearts 4 November 2019 Update starts Sid holds the Joker by the neck and says the game is up! He asks why the Joker is after him and trying to hurt his family? The Joker doesn’t respond. Sid sees part of the Joker’s hair sticking out from under his wig. As he tries to touch the wig, the Joker lights up a paint bomb and Sid covers his eyes from the smoke. The Joker escapes and Sid sees a Watch on the ground. He remembers the watch as Shabnam’s own.

Pinto calls him on the Phone and says he has a link that will lead them to the person who is behind the Joker costume. Sid and Pinto go to a building. Resham sees them and goes home to tell DD. DD asks Roshni if Sid came home the night before? Roshni says he didn’t. DD says she can’t trust him anymore because today it’s the first day of their launch and he’s not around to help her, she doesn’t even know why she included his name because Yash is the one helping her and if it wasn’t for Yash, she doesn’t know what would have happened!

DD is being interviewed for her new collection by members of the Press and she tells that she is happy with her new jewellery line. She is asked where her Son-in-law is since she named the collection after him? DD says it’s all in the family. They ask if he’s still a part of the project? DD is unable to answer and she gets tensed. Yash comes and says Sid is still a part of them and they all share responsibilities. He says as it is a big project, Sid is handling something else. DD thanks the Reporters and says have a good day.

The lady drags her suitcase to a waiting Rickshaw. The wind blows the veil covering her face and Sid is surprised to see it’s Shabnam. She gets into the rickshaw and leaves. Sid follows her on a bicycle but he loses her.

A Man whose face isn’t shown goes into DD’s house and enters Aisha’s room. Aisha is playing with her doll. The Man sits on the bed and it’s Sid. He gives Aisha a Watch and says she needs it to keep track of the time.

Aisha thanks him. He tells her to go and play. Roshni returns home and tells Sid that he finally decided to come home! Sid ignores her. Yash enters the room to ask where he has been? Sid thanks him for handling things in his absence. He takes Yash’s jacket off and says he must be hot. He sees a Camera in the bin and throws Yash’s jacket over it. Roshni asks him what has come over him lately! Sid says he’s crazy about her. Roshni is very upset with him. She tells him DD is very disappointed in him and walks out of the room.

Yash asks Sid why he’s acting weird? Sid says he has covered all the Cameras in the house that Shabnam hid. He says Shabnam is the one behind everything. Yash seems surprised. Sid says he knows his family is upset with him but he has to protect them. He tells that Aisha is Shabnam’s Sister and he can’t see her caught. They have to do something!

Sid tells Aisha that she has to go to a Summer Camp. Aisha says she won’t go. Sid pleads with her but Aisha says she wants to stay with her family. Roshni enters the room and asks why he’s forcing her to go to Summer Camp? She says Aisha is very small and crying, don’t pressurize her. Sid says she needs to go and mingle with other Kids. Roshni says she doesn’t agree with him. Sid says they have to both agree.

DD enters the room and says he can’t force Aisha to go! Sid says he’s Ayesha’s father and he has to decide for his Child! He reminds DD that she never liked Aisha in the past. Roshni tells him not to talk to her Mum that way. DD says he’s right and she had no right to interfere. She has tears in her eyes as she turns to leave the room. Sid feels bad about what he has done but he’s thinking of the family’s safety. He picks up Aisha’s bag and she begs not to go but he doesn’t listen to her.

Sid wakes up in the Morning and he’s about to call the Camp to check up on Aisha. He sees a newspaper by his side with an article that says Aisha has been kidnapped. He calls the Camp and the Camp coordinator says Aisha is with her in her Office, playing. Sid goes to pick Aisha up from the Summer Camp. She asks if they are going home? Sid says they are not going home but another person’s house where they would play hide and seek. Aisha is excited.

Sid receives a call from Pinto who tells him he’s stuck in traffic but he has spoken to his Sister who will be waiting at the house for Aisha.

DD is at home, freaking out about the launch that is supposed to take place without Sid! She asks Roshni if she has heard from Sid? Roshni says she hasn’t. DD says Sid is just a joke!
Yash enters the house and asks for Sid? The Cook says Sid said he got an important call. Yash tells DD that Sid might have gone to the launch ahead of them.

They arrive at the Venue of the launch and Sid is not there. DD gets upset again. Yash tells her he would handle things and takes Kesar with him. Roshni tries to call Sid but there is no response.
Sid takes Aisha to Pinto’s house and leaves her with Pinto’s Sister. Aisha tells him she loves him and she would be fine. Sid begs Pinto’s Sister to take care of her. He tells Aisha that he would be back to play hide and seek with her. He has tears in his eyes as he leaves her. He gets in the Car and calls Roshni. She tells him to come to the launch because they are waiting for him. He says he’s so sorry but he will make it up to them.

Roshni tells DD that Sid is on his way. Sid gets a call from Pinto and gets a shock. He goes to Pinto’s house. Pinto shows him his real Sister and says the lady Sid met earlier was an Impostor who came with two thugs and locked his Sister up and waited for Sid so she could kidnap Aisha. Sid beats himself for falling into the trap and handing Aisha over to criminals! He remembers the watch he gave Aisha has a tracker. He tells Pinto that he can locate her location.

The Reporters start hounding DD about Sid’s absence. They tell her to remove his name from the brand since he’s never around! DD is embarrassed. Roshni tells herself that she would never forgive Sid!

Sid follows the tracker on his Phone to a Warehouse. He’s surprised to see Shabnam tied to a Chair. He threatens her and asks where Aisha is! Shabnam says she would never harm her own Sister and someone is just taking advantage of the bad blood between them. Sid doesn’t believe her. He approaches her and she tells him not to come closer because there is a bomb behind her.

DD is back home. She recalls the Reporters asking her about Sid if he is so happy with her project? She gets teary eyes and wipes her tears. Roshni comes and sees her in her room looking sad. Roshni apologises on Sid’s behalf and says something must have happened to make him miss the launch. DD says she knows Roshni will always side with him but she can’t handle it anymore and she has given up on Sid and she just wants to be alone now! Roshni tries to plead with her but DD walks out of the room.

Shabnam asks Sid to save her. Sid unties Shabnam and says he knows the bomb is a fake just like her! He takes the bomb and throws it away. The bomb explodes as it lands. Shabnam tells him she was telling the truth. Sid is shocked but says he still doesn’t believe her because a person capable of pretending to jump into the fire to save Roshni is capable of anything and he won’t fall for her trick this time! He says she either tells him where his daughter is or he kills her! Shabnam says she didn’t do it and it was the Joker! Sid is shocked.

Yash goes to meet a sad Roshni and assures her Sid would return soon. DD enters the room and says she doesn’t want to hear about Sid! Yash leads Roshni out of the room. Samaira is listening by the door. She hides as they come out of the room. Yash tells Roshni not to worry because everything will be fine. Samaira vows to deal with Yash because she is hurt but all he cares about is Roshni!

Shabnam says the Joker has been after her for a long time and she keeps running from him but he finds her. She says she would just end her life! She runs to the window and tries to jump out but Sid stops her. He says he doesn’t know if she’s lying but if she loves her Sister, she would help to save her. He takes her to Pinto’s house. Her Phone rings and Sid takes it. The Joker laughs and says Sid was going to play hide and seek with Aisha but he would help Sid out. He says Aisha is with him. Sid and Shabnam gasp in fear.

King of Hearts 4 November 2019 Update ends when the Joker says when he was a child, he loved football and one day, a boy kicked him on purpose so he broke the boy’s leg! He holds Aisha doll and says the doll’s hair is just like Aisha’s. Sid warns him not to do anything to Aisha! Shabnam panics. The Joker tells Sid that he has to follow his instructions if he wants to see Aisha again! Sid begs him not to hurt Aisha and he would do anything. Other King of Hearts Updates 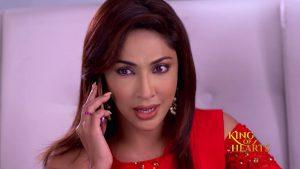