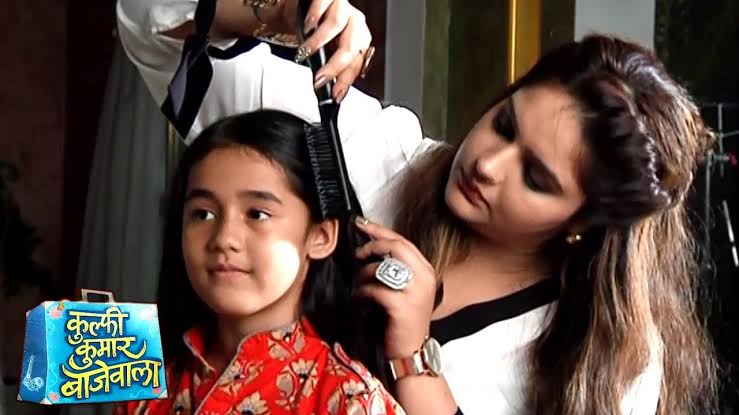 Lovely asks Sikander who is Nimrat, Sikander says cmon she is Gunjan some cousin and my fan so chill, Lovely, says like this I love you and all, Sikander says I can smell jealousy, and passiveness, Lovely says nonsense, Sikander says it’s fine it’s your right, I don’t mind. Nimrat says to Gunjan look Didi she is so much in love with him, Gunjan says quite now I will make all fine since you are here, Bebe and Mahendra walk to them, Mahendra says sorry I didn’t recognize you, nitrate says it’s me Nimi, Bebe says wow you have grown up.

Bebe asks Nimrat how is she here, Gunjan says her landlord without notice threw her so, I called her here, Kulfi walks in and sees Nimrat and gets very excited, both rush to each other and hug, Sikander and lovely here her name Nimrat and are shocked.

Lovely shares her problem with cutie,Lovely says when I find some hope, something happens why is it, new Nimrat, she stuck to Sikander, cutie doesn’t get Lovely, Amyra hears them talk. Kulfi thinks it’s her mistake because she called her name aloud and says all are upset because of me. Nimrat walks to kulfi with her sitar and asks her can you play it, Kulfi says no, and kids should stay away, nimrat says foolish come let me teach you.

Nimrat says very good Kulfi, Kulfi sees her mother in Nimrat, and gets very happy, Amyra walks to them, Kulfi introduces her to Nimrat. Bebe and Mohendar scold gunjan as they didn’t know nimi is named nimrat, and didn’t she think about Sikander and kulfi, and what new plan she is upto, gunjan says enough I got nimrat to help her but you never see good in me. Cutie asks where did this Nimrat come from, lovely says gunjans sister, cutie says so many years she didn’t come but only when you two decided to give a new chance, this is sikanders families new plan to throw you out, lovely remembers gunjans words.

Nimrat says you are Sikanders daughter right, I follow you too, you are so cute, amyra says excuse me Kulfi I need to talk to you, Kulfi asks Nimrat to share room with her and leaves with Amyra, Kulfi keeps praising Nimrat, amyra says duffer, enough she can’t stay here, she is bad aunty. Nimrat in kulfis room, looks at Sikander’s jacket she got in a concert and his bracelet he found onceon airport, her scrapbook, with pictures all of Sikander.

Kulfi says Amyra why is she bad, Amyra says just say what I say, don’t share room with her,and don’t talk to her, Kulfi asks why she taught me sitar and also sang with me,Kulfi asks why all this, Ma always said guest is god, amyra says okay I will prove you she is bad aunty. Kulfi The Singing Star 04 October 2019 Update

Kulfi walks in her room and asks what are you doing alone in this room, come I will show you this house, Kulfi very excited while giving house tour and shows music room, and asks not to touch his instruments, they bump into Sikander, lovely walks there too, and asks what’s happening.

Amyra goes to kulfis room and starts looking for proves and goes through Nimrats stuff. Lovely asks what’s going on here, and says Sikander I’m asking you, why aren’t you answering, Amyra says I know and walks in with Nimrats sack and empties it and says look she is crazy about dad, dads jacket T-shirt, scrapbook,Amyra asks Nimrat why does she have her fathers photos, Nimrat says you all are taking it wrong,

Lovely says yes explain, you say I love you in front of me hug him, Nimrat says I respect you, please don’t take it wrong, Lovely says all this nonsense is respect, Nimrat says I’m fond of music and all this is since my childhood,I’m just a fan, please trust me,Gunjan walks to Nimrat and hugs her and says enough, she is fan and even we have done such crazy fan things.

Sikander stops Amyra from arguing and says princess you know right I have lot of fans,nimrat says I’m just a fan please trust me,amyra sees tattoo on her hand and asks what is this,SSG means Sikander Singh Gill, why do you have my fathers initials tattooed, do fans do such things, sikander asks Nimrat what is this, nimrat says look I’m your fan but these aren’t your initials but satguru saath Gana, my devotion to singing, Amyra says mom she is lying, she isn’t able to face us so she is 100% lying…Kulfi The Singing Star 04 October 2019 Update

Kulfi remembers Nimrat beginning her song saying satguru sath gana, and says she isn’t I heard her say that,Gunjan says now can you trust my sister, poor girl made her cry,amyra says but, Sikander says enough you believe Kulfi right, give up on this anger, Amyra leaves, Kulfi follows.

Lovely says enough this girl won’t stay here,she has to leave, Sikander says lovely, lovely says I have no time for an explanation she has to leave. Kulfi tries to convince Amyra, Amyra says you have to be on my side but you took her side, Kulfi says but she said the truth, Amyra says you like her because her name is nimrat and she reminds her of your name. Gunjan says where will my sister go,Nimrat says please I respect you a lot, I will leave,it’s wrong staying here, gunjan says where will you go, nimrat says I will manage I will shift to a lodge, Sikander says not required.

Kulfi says yes she reminds me of my mother but, Amyra says I noticed it but get up, you aren’t my friend you cheated on me,and leaves. Sikander says I will manage for your stay in a good hotel till you find a PG,gunjan says good so will I now, Mohendar says where too, gunjan says I will be there for my sister, if my family finds I couldn’t be there for my sister they won’t like it, and tell me would you behave same with minti…Kulfi The Singing Star 04 October 2019 Update

Mohendar says calm down Gunjan, Gunjan says no one supported me ever, you always are partial towards Lovely, she left you alone but I was always there, but still, you choose her, Sikander says enough bhabhi it’s your house, she will stay here.

Sikander says lovely I’m sorry but we can’t treat bhabhi this way, she is feeling so bad, Nimrat says lovely I know you aren’t allied but I will shift asap and promise I won’t create any problems promise, Lovely leaves.

Sikander and kulfi in balcony lying down, Sikander says Lovely is very angry, Kulfi says even Amyra, Sikander says this mother-daughter are so alike and very stubborn, Kulfi says so true, but I and Amyra are small we patch up quickly, but what about you and lovely.

Sikander thinks Lovely has given me 30 days span to choose but if this idea works she will see Kulfi through my eyes and I will never have to choose between you two.

Nimrat says my friends where making tattoos and so I did this and I never knew this would creat this big problem and I don’t know why I lied, I should go confess they will forgive me, Gunjan says shut up and stay here, no need keep quiet and forget everything happened.

Lovely gets scared seeing Sikander in the room, and asks how did you manage to come here, Sikander says for past an hour I’m trying to get in,are you still angry, Lovely says really, Sikander look only you matter, Sikander says I know you are thinking I again choose someone else,…Kulfi The Singing Star 04 October 2019