Kumkum Bhagya 13 February 2020 Written Update starts when Ranbir telling Prachi that he felt something during rain. Prachi asks what? She asks if he is ending the call. Ranbir says yes and says if I don’t end the call then might tell everything. He ends the call. Prachi closes the window. Ranbir thinks about her…and smiles. Song plays…..yeh koshishein…Dimpy and Shaina come to the college and say there is no single guy standing. Dimpy says last years, guys stood in line to give flowers to Rhea.

Rhea comes there. The guys run to her and gives her flowers, but she throws the flowers and asks them to try next year. Shaina says you should have kept their heart. Rhea says see their faces, they want to impress me. Shaina asks if she is thinking about Ranbir. Rhea asks them to bring someone better than him. She goes. Dimpy and Shaina talk about Ranbir.

Abhi tells Vikram that he is neglecting hotel business. Vikram says when I heard you singing then I thought to enter music industry. Abhi says you wanted to earn profits. He asks what is going on. He asks the employees. Vikram says there is something fishy. Juhi says nothing and asks Abhi to sign. Abhi opens the file and sees flower. Juhi says it is not for you, but given to me by my boyfriend. Vikram says Pallavi tried to tell me about this day.

Abhi asks Vikram to take expensive gift for Pallavi. Vikram asks if he used to cheer her with gifts. Abhi says gifts never matter to her, she used to get happy if I give her my time. He says happy valentine’s day. Vikram thinks if such love exists.

Aryan asks Ranbir to wish happy valentine’s day to Prachi. Ranbir says she doesn’t know my feelings and tells that if I go to her and thank her, then tell about my feelings, then it will not look good. Aryan says she must be waiting for your confession. Ranbir says this can’t happen like that, I don’t think valentine’s day is my type and wants to do something grand and different for her, which nobody has done before.

Shahana tells Prachi that today is good and asks why she is upset. Prachi says why Sarita behen got angry as if she hates love. Shahana says Sarita behen is not against love, but she is against time pass. She says her thinking is modern and she wants you to express your feelings to Ranbir, then you will get go ahead from Sarita behen and you can romance with him openly. She says if you don’t propose Ranbir then I will propose him on your behalf. Prachi says they are just friends.

Kumkum Bhagya 13 February 2020 Written Update continues as Shahana thinks when Sarita behen saw you both together then there must be something between you both. She asks prachi if she has rose? Prachi says no and tells that she don’t want to propose anyone. She asks what type of proposal she likes? Prachi says if a guy gives her pink rose or all the roses then she will agree. Ranbir hears her and notes it down. Aryan thinks I know what you are thinking. He asks do you want to propose her?

Ranbir says he wants to propose her in Desi way. Aryan goes to his class. Ranbir comes to the flower shop and asks the florist if there is different significance of a flower. Florist explains to him and tells that red is for love. Ranbir tells that he will keep all the flowers, white, yellow, pink and red. He thanks the florist.

A girl comes to Ranbir and gives him flower. Ranbir thanks her and tells that he can’t take it as he is of someone else. Aryan asks Shahana about Prachi. Shahana asks if he wants to give flower to Prachi. Aryan says no and asks if she can keep the secret. He tells that Ranbir bought flowers for Prachi. Shahana gets happy and hugs her. Aryan says sorry for the hug.

Shahana gets upset. She says you have flower shop outside the college. Aryan asks her how many flowers are there in her hand. Shahana says nothing. Aryan says even I have nobody who gives me red rose. Shahana says we shall give roses to each other. Aryan says so that nobody shall know that nobody likes us.

Ranbir calls Prachi and tells that he is in library. He asks her to look for him. Prachi says the guy is not you. Ranbir asks how do you know? Prachi says from your style. Ranbir appreciates her and asks where is she? She says she is in romance section. Ranbir says I will be coming there. He collides with Dimpy and she sees flower in his hand. She calls Rhea and informs her that Ranbir is waiting for her in the library to propose her.

Ranbir comes running to Prachi and tells that he read book on marathon. Prachi tells that she shall return the book. Ranbir asks her to keep the romance book with herself. Prachi asks what is going on in his mind? Ranbir thinks which flower to give her first and thinks to give her flowers one by one. She sees a couple romancing there and says disgusting.

Kumkum Bhagya 13 February 2020 Written Update ends when Ranbir says it is valentine’s day. Prachi says they get close first, then realize that they are not compatible and do break up. Ranbir says yes, you are right. He asks her to lets go and collides with her. Prachi’s book falls down. He sits down on his knees to pick the book. Rhea comes there and sees him on his knees. 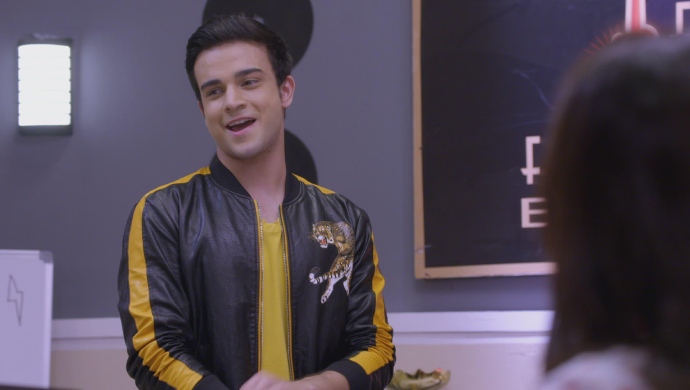