Lady Luck 25th November 2019 Update – Maan reaches Bhoomi’s apartment and asks neighbor aunty about her. Aunty says they left in the morning to Ujjain and Daadaji told Bhoomi’s marriage is in some days. He asks if she knows their address. She says no. He sees his gifted flower plant on the floor and thinks Bhoomi has kept it safe, that means she likes him. He calls Ria and asks Bhoomi’s address. She says LK road in Ujjain. He thinks he will meet Bhoomi at any cost.

Surbhi gets ready and smiles thinking of meeting Varun. Suman comes with her jewelry and asks to select one. Surbhi selects one and asks her to get ready soon. Avni on the other side sees Bhoomi and says she is looking very beautiful and shows her to Dhara and Janaki. Janaki says Bhoomi will be meeting her would-be husband for the first time today. Dhara gets emotional.

Janaki says she was also tensed when Avni got married. Avni asks her to stop getting tensed and says Bhoomi and Maan will look like a perfect couple soon. Bhoomi shies. Dhara asks if she is fine. Bhoomi says she is and asks her to care for guests.

Avni’s husband comes with flower bouquet and wishes happy marriage anniversary to Rajender. Daada asks where are his parents. He says they went to bangalore on some important work. Daadi asks Varun to take care of daamadiji. Bhoomi comes with Avni. Daadi says her granddaughter is looking very pretty and asks Dhara to apply kajol on her. She says she is feeling like coming back to heaven after coming back home.

Daada says she is right. Daadi asks why Vasundhara’s family has not come yet. Bhoomi thinks her family is happy, but why is she tensed. Ansh reaches Bhoomi’s area and asks shopkeeper Shukla’s house. Shopkeeper says there are 4 Shukla’s here. Ansh says he does not know his full name. Just then, Bhabhi maa passes by with family in another car. Ansh then gets back into the car and leaves.

Bhabhi reaches Shukla’s house with family and wishes happy marriage anniversary to Rajender and Janaki and gives gifts. Bhoomi touches her and other elder’s feet and take their blessings. Surbhi also does same. Suman thinks when she asked her before, she was irked, now she herself has become so sanskaari. Ansh reaches Shukla house and thinks of going from the backside.

Rajender and Janaki cut cake. Everyone clap for them and sit on sofa. Varun signals Surbhi to come. She tells Suman that she will get cold drinks and meets Varun who takes her to balcony. Daadi tells Bhabhi maa that Bhoomi will soon go to her house says it would have been good if daamaadji would have come, bhoomi would have seen him. Bhabhi maa angrily looks at Latha. Lady Luck 25th November 2019 Update

Ansh thinks of climbing pipe to reach Bhoomi’s room. He sees Varun and Surbhi coming in balcony and hides. Varun tells surbhi that she is looking very beautiful. Bhoomi comes there and says everyone are waiting for them downstairs. Surbhi leaves. Varun tells Bhoomi that it is good our families preponed marriage and asks if she is happy with her marriage. She says she is nervous. He asks if something else is there.

Bhoomi says meeting her fiance before marriage is not in her face. Varun says meeting him is her right. She takes him in and asks him to go down while she takes headache pills and comes back. Ansh climbs back stairs and reaches Bhoomi’s room balcony. Bhoomi is engrasped in Ansh’s thoughts reminiscing him telling me I love you and telling him he knows even she loves him, etc…

She panics and turns back and is shocked to see Ansh starting there. She asks why did he come. He says she was missing him, so he came here. He gives a flower pot and asks why did she leave it. He says he wants her answer. She continues staring at him in disbelief. He says when he can do anything for Ria and Saurabh’s love, she can imagine what he can do for his love.

He holds her hands and says without love, any relationship cannot be complete and says she will repent that she did not give her one chance to herself and says if she accepts him, he will handle everything well. She slaps him and says his love is not more than her family and asks him to get out of her life and house. He says maybe his love is weak, so she cannot love or maybe his fate is ill that he could not get her. He says it is not in his fate to keep her happy and leaves saying her sorry. He sadly gets back into his car and leaves.

Bhoomi starts crying. Varun comes and asks why is she crying. She says her headache has increased. He says he is her elder brother and she should not hide anything. She hugs him and starts crying loudly. He asks her again what happened. She tells him the whole incident happened in Indore from Ansh kidnapping her to proposing her and today coming here. She explained to him repeatedly that nothing can happen, but he does not want to listen to her at all. Varun asks if she felt bad denying him. She says maybe yes or no. He asks if she also loves him. She stands silently.

Latha comes to Bhoomi’s room and sees Varun also there. She tells Bhabhi is going and is asking them. They go down, and Bhoomi takes Bhabhi maa’s blessings. Rajender tells their family guru has preponed the marriage. Bhabhi maa says she will fix the marriage date tomorrow itself. Latha gets worried thinking if Maan will agree for the marriage so soon. Lady Luck 25th November 2019 Update

Maan while driving reminisces Bhoomi slapping him and asking to get out of her life and thinks why did she do this. Bhoomi reminisces Maan telling her I love you and panics. Varun comes and asks till when she will run. Bhoomi injures her hand. He says he will get medicine. She says she is fine. He says wound has to be medicine and the same way problems have to be faced, she has to agree that she loves him. She says she does not even think of him and as he knows, she will never go against her family.

He says it is her life’s issue and she cannot be so casual. She says she is serious and cannot be reason for her family’s sorrows, especially Tauji will be shattered if he will know about this. He says her face clearly says that she is not happy with this alliance. She says she is disturbed that so many things happened simultaneously but is happy with her alliance. He walks out angrily.

Bhoomi again reminisces Ansh’s words. She sees his gifted plant and gets it in and keeps it on her dressing table. Maan reminisces getting slapped and panics. He starts crying.

Bhabhi maa comes back home, tells Rajender gave good news and asks Devar to start marriage arrangement and she does not want any mistakes as Prajapathi family is having a marriage after many years. Devar says he will not let her complain. Bhabhi maa asks Latha if Maan came. She says she does not know. Bhabhi asks her to inform Maan that his marriage is after 1 month.

Latha goes to Maan’s room and says she wants to talk to him. He says he is sleepy and will talk to her in the morning. She asks why is he doing this. He sleeps on her lap. She says she knows he is not happy with the marriage and also knows his badi maa, she is very happy and he should not break her heart. His marriage is preponed to next month and says if this marriage does not happen, bhabhi will shatter and he should think of the girl also. He says he is feeling very sleepy. She says he has to think of others also.

Suman yells in front of her husband that Bhabhi maa has selected such a low guy for Surbhi. He says his daamad is better than him and will keep Surbhi happy. She gets irked. Mansi does not get sleeping reminisces Bhoomi’s words. Mai tenu samjhawaki ….song…plays in the background. Lady Luck 25th November 2019 Update

Rajender sees Bijender in the hall at night and asks if he did not sleep yet. Bijender says he is nervous regarding Bhoomi’s marriage, it looks like just a few days ago she was small and she grew up suddenly to get married. Rajender says even he felt the same when Avni got married. Bhoomi comes down and smiles and says she is happy that she has 2 papas. Lady Luck 25th November 2019 Update 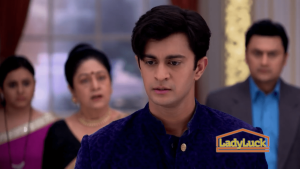