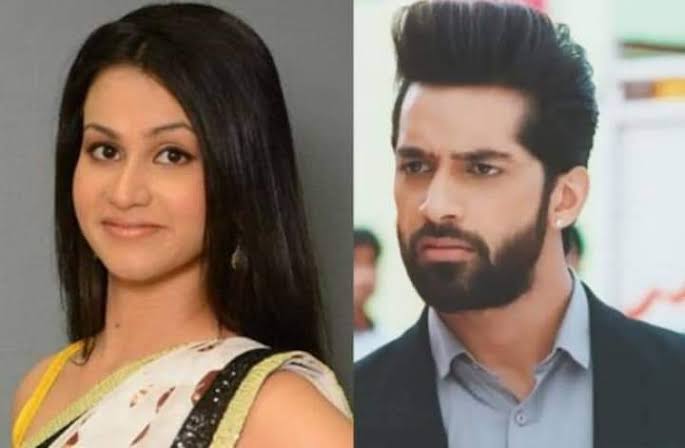 Shaurya and Mahek sees Sooraj in site area. He starts beating him, Mahek asks him to stop. Police moves Shaurya away from him and arrests Sooraj. Shaurya lifts unconscious Anjali and leaves with Mahek.

Doctor treats Anjali and says take care of her, she will wake up soon. Anjali acts like she is unconscious. Karuna cries. Dolly says she will be fine. Anjali wakes up and says Maa.. Karuna says i am with you, dont worry, we all are here. Shaurya says you are fine, did he do something with you?

Mahek says Sooraj was arrested, we are with you and you are safe. Karuna asks her to say something. Shaurya says he kidnapped her and physically assaulted her but he is arrested now, I wont spare him, police will beat him good. Anjali says stop it, Sooraj saved my life and you gave him to police? he saved me and you rewarded him like this, I fainted there so he helped me, if he kidnapped me then why did he stay there? for Shaurya to go and beat him? Shaurya says but I saw..

Anjali says you always see what you want to see, you dont care about others feelings, I was running away from house, I thought that you people dont care and wont understand my feelings but I fainted so Sooraj was giving me CPR, mom if you want to see me happy then please bring Sooraj out of jail.

Shaurya says but what I saw.. Karuna says enough, Shaurya you and Mahek have done enough of you what you both wanted, you have hurt my daughter, she says to Anjali that I will talk to lawyer and free Sooraj. Anjali says take me too, Karuna says yes come with me, they leave. Dolly asks Shaurya and Mahek to stay back, she leaves.

Shaurya sadly sits on bed and says what did I do? Mahek hugs him and consoles him. Shaurya says you asked me to not be angry but I lost my control and broke my sister’s heart. Mahek says you did a mistake but dont be disappointed. Shaurya says it was a sin, I failed, he breaks glass in anger, his hand bleeds. Mahek puts cloth on his wound, she says I am sorry I cant help you but hurting yourself is not a solution, she cries and hugs him.

Karuna, Dolly and Anjali comes to police station. Sooraj comes out of jail, he is injured. Anjali says I am sorry Sorraj, my brother did a mistake. Sooraj says I did mistake by loving you, I got beaten by your brother and police, I dont want to have any relation with you. Anjali says I am sorry, he did a mistake. Sooraj says your brother is a goon, he will beat me whenever his wife tells him, I am poor but have respect.

Karuna says to Dolly that this is all Mahek’s doing, she must have provoked Shaurya to beat him. Anjali smirks hearing it. Sooraj starts to leave. Anjali sees knife there and cuts her pulse, she faints. Karuna hugs her and cries. Sooraj runs to her. Mehek 10th October 2019 Update On Zee World

Mahek treats Shaurya’s hand. She gets a call and is shocked to know about Anjali. She drops phone in shock and looks at Shaurya.

Anjali is brought to hospital, inspector takes Sooraj’s statement. Karuna cries and says if anything happens to Anjali then I wont be able to forgive myself. Shaurya and Mahek comes there. Shaurya glares at Sooraj. Dolly tells everything to Mahek. Dolly leaves with nurse for formalities. Shaurya says to Karuna that dont worry, Anjali will be fine, I will bring best medical treatment for my sister. Karuna sees Anjali’s blood on her hand and slaps Shaurya hard, Mahek is stunned.

Doctor treats Anjali, nurse says she is lucky she got saved. Doctor says seems like she cut her wrist as warning only as injuries are not severe, lets make her medical report, they leave. Anjali sits up and says doctor is intelligent, this wound is not deep but wound that I will give to Shaurya and Mahek will be deep, he presses on her wound so blood oozes out from bandage.

Outside ward, Karuna says to Shaurya that I have seen your madness and Mahek’s stubbornness. Karuna says to Shaurya and Mahek that you both are responsible for Anjali’s condition, I told you many times to not force Anjali to marry but you didnt listen because you listen to your wife more these days, Shaurya says nothing like that, Mahek says Maa.. Karuna says you dont talk, I know you are not happy with Anjali coming in house.

Shaurya says you are saying hurtful things, its nothing like that. Karuna says I have been seeing things, when Anjali got cheap clothes, when diya in mandir was not lit, I remained silent for house’s peace but I saw everything and I know Mahek will never accept Anjali, Mahek is shocked to hear that.

Mahek cries and says how can you even say that Maa? Karuna jerks away from her. Mahek says I never differentiated between Nehal and Anjali.

Karuna says you can make good words but if you are so good then why you made people joke around Anjali in Jagran? She says to Shaurya that you are so blind for Mahek that you wont see that Mahek have put all this fire for Anjali, she tells everything to her family.

Mahek recalls how Kanta told her once that when a new person enters house, problems arise and you can be alone sometimes but you have keep bonds strong with people and work harder on your relations. Mahek looks on.

Mahek says ma I know you are angry because Anjali is not well but you know how much i love her. Karuna says you can’t accept her and that is why you are doing all this. You planned her wedding so she goes out of this house. You use shaurya to complete your plan. You knew she wasn’t in your control so you asked Shaurya to use against Anjali. Why do you have her.

Mahek says why would I bring her here? Karuna says you wanted appreciated that you are hungry of. You wanted her to get married and go away from this house. Mahek says ma please dont’ say that. Shaurya says she asked me to listen to Anjali but I was forcing it. karuna shoves Mahek. Shaurya says enough ma. Say whatever you want to say to me but I wont accept all this against my wife.

She is the girl who treated you with more respect than a mother. You can’t see the truth. I wont tolerate a word against Mahek even if its coming from you. Nurse says Anjali is conscious. Karuna says you both wont come in. She goes in. Mehek 10th October 2019 Update On Zee World

Shaurya sits with mahek and caresses her face. Sooraj is sitting with Anjali. He says your family wont accept me. Anjali says if they can’t value my love then I dont’ want that family. I don’t wanna live here. Mahek says anjali you don’t need to go anywhere you will live with us. Karuna says get out of here don’t pretend to be nice. Shaurya holds mahek’s hand and leaves.

Karuna says don’t worry your mom is with you. I will always do what you want She goes out. Sooraj says it still didn’t work out like we thought. She didn’t kick Mahek out. Sooraj says don’t worry she will. Shaurya says you can’t do all this shaurya. He says didn’t you hear what she said? She says go in and help her with formalities. SHe is our mother. Karuna and Sooraj come out with Anjali. They go home.

You and your wife can live in this house. I and Anjali are leaving this house. Be happy mahek stay happy here alone. we are leaving. Shaurya says no. This is your house. We will leave this house if you dont’ want us near you and Anjali.