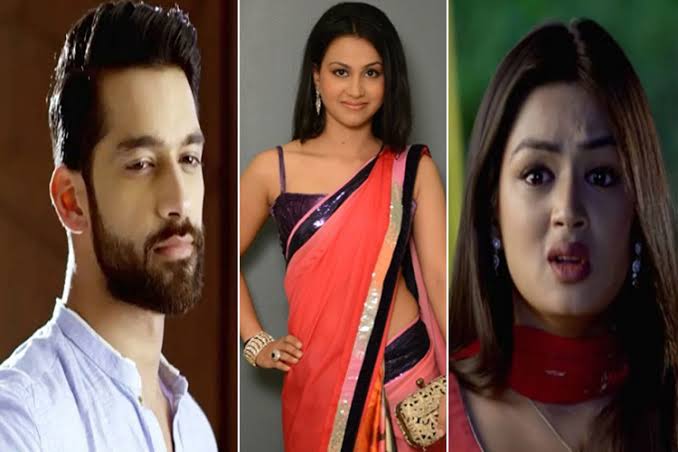 Mehek 11th October 2019 Update On Zee World Series – The episode starts when Shaurya says to Karuna that you wont go from your house, if you want then me and Mahek will leave this house. Anjali thinks that they did my work. Shaurya says we will leave, you are a mother, what you want will happen. Mahek cries.

Shaurya holds her hand and leaves. Karuna looks on. Anjali thinks check and mate. Mahek says to Shaurya that she is your mother, you cant leave her alone like this. Shaurya says she has whole family. Mahek hugs him and cries.

In the morning, Dolly says to Karuna that you can still stop Shaurya, for God’s sake stop him, he is going to leave house, please stop him, you are his mother, house is breaking. Karuna says i didnt ask him to leave house, he is taking his decisions or maybe listening to his wife. Dolly says your real daughter is here so now shaurya is a step son. Anjali comes there and says she never differentiated between him and me. Dolly says to Karuna that you are doing a sin.

Shaurya is packing bag, Dolly comes there and says you are not going anywhere. Anjali says to Karuna that I am tensed, what is happening is not right, she asks her to take medicines. Karuna takes it.

Dolly says to Shaurya that listen to me. Shaurya sees Karuna, his and Mahek’s photo. Dolly says she is a mother, she can be angry on you but you cant leave her like this, Mahek thinks hope Shaurya understands her. Dolly says I wont let you go Shaurya.

Anjali says to Karuna what if they file case on us? Karuna says what case? Anjali says Shaurya have clean heart but Mahek.. I mean anything can happen.

Dolly asks Mahek to stop Shaurya. Mahek says he is not listening, I will go with him anywhere.

Anjali says to Karuna that I am tensed, Mahek doesnt want to leave house, shaurya wants to leave house, he loves her a lot, he gave her all happiness, even gave her all property, Mahek has strong grip on Shaurya and it will be difficult for her to leave all this, I am feeling that Mahek can take some step, what if she files some case for property after they leave? What if she takes some drastic step, I am sorry, I am thinking too far ahead. Karuna says you are not wrong, I have to talk to Shaurya and Mahek and solve things, she leaves.

Anjali smirks and says what will happen to Sita now. Dolly is crying and trying to call Kanta. Mahek says dont tell her, she will worry. Karuna comes there and says Kanta has no rights to take this house’s decisions. She sees Shaurya packing and says what is all this drama? you will leave today and file case on me tomorrow. Shaurya says what case? Karuna says I dont this Mahek, she is your Mahek. Shaurya says what has happened to my mother?

Karuna says where is my son? you have left your mother since your wife have arrived. Shaurya says she was your daughter before and now she is my wife only, what happened? Shaurya leaves.

Shaurya signs papers. Mahek holds his hand and says you wont be able to live without your mother, you are leaving everything behind, not only your property. Khurrana looks on.

Anjali says dont know what Shaurya’s plan, what if he doesnt give away property? Karuna comes there and sees her talking to Sooraj. Anjali says I am worried, what happened? Karuna says Shaurya have signed some papers.

Shaurya and Mahek signs papers. Anjali and Karuna comes there. Shaurya takes number from his Identity card. Anjali sees credit cards and says Maa dont take their cards, they will need some money. Shaurya says to Karuna that Mahek have signed property papers, she have given property to you. Karuna says give me your credit cards. Shaurya is hurt. Mahek nods at him. Shaurya gives it to her. Mehek 11th October 2019 Update On Zee World Series

Shaurya sees Karuna and his photo in wallet. Mahek thinks Maa is hurting Shaurya a lot, I came here for love and Shaurya only, I didnt have anything else here but Shaurya, he lived here, how will he survive outside, this is house but if he wants that then I will support him. Shaurya takes off his ring and says we dont take anything from here. He points at Mahek. Mahek takes off her shagun bangles and rings.

She gives it to Karuna. Karuna looks on. Shaurya says whatever you have given, we are leaving all that, just your love and upbringing is going with me, thanks Maa, I love you. Mahek wipes her tears.

Dolly brings her bag. She says to Shaurya i will come with you too. Shaurya says no please stay with em and take care of her. Anjali gives Shaurya money and says this is all I earned in my life. This is for you. I know its less. He says thanks for caring for your brother. Mahek says take care of mom. please call us when you need. Dolly says please rethink. Shaurya says we have decided. They leave the house. Dolly gives Mahek their family bangles.

Mahek and SHaurya are leaving. Shaurya takes their family photo and says I am taking this with me. They touch Karuna’s feet and leave. Mahek recalls her moments in the house. She is in tears. she recalls when she entered the house. Shaurya trips, Mahek holds him. He is in tears. They both walk away from the house. Mahek and SHaurya get an auto. Mahek says don’t worry too much. We will go to Chandni Chowk. We will handle it all together. Don’t worry. Anjali says to Karuna mom don’t worry. God will fix everything.

Mahek and Shaurya come to Chandni Chowk. The key doesn’t open the door. Gaurd comes and says who are you? A neighbor comes and says this house was sold to me. I have given advance to chacha ji. Mahek says oh its okay. They leave from there.

Sooraj smirks at the guy. Mahek and Shaurya sit on the bench. Anjali meets Sooraj. He says plan successfully. She says that the old woman still owns it. She says it’s a long way to go. Now see how I do it. Sooraj says I know you do it right. They pop the champagne. They both dance together. Mahek sees kids on the road. Shaurya says lets go.

Dolly comes to Anjali’s room and says what were you doing so loud music? She sees Sooraj’s socks. Anjali says I was seeing TV.

Mahek and Shaurya eat on the roadside. Sooraj is hidden in the balcony. Dolly comes out and says this girl is nor right. Mahek says we should get the loan on my jewelry. He says no. She says Mausi gave it to us so we can use it in need. He hugs her…Mehek 11th October 2019 Update…