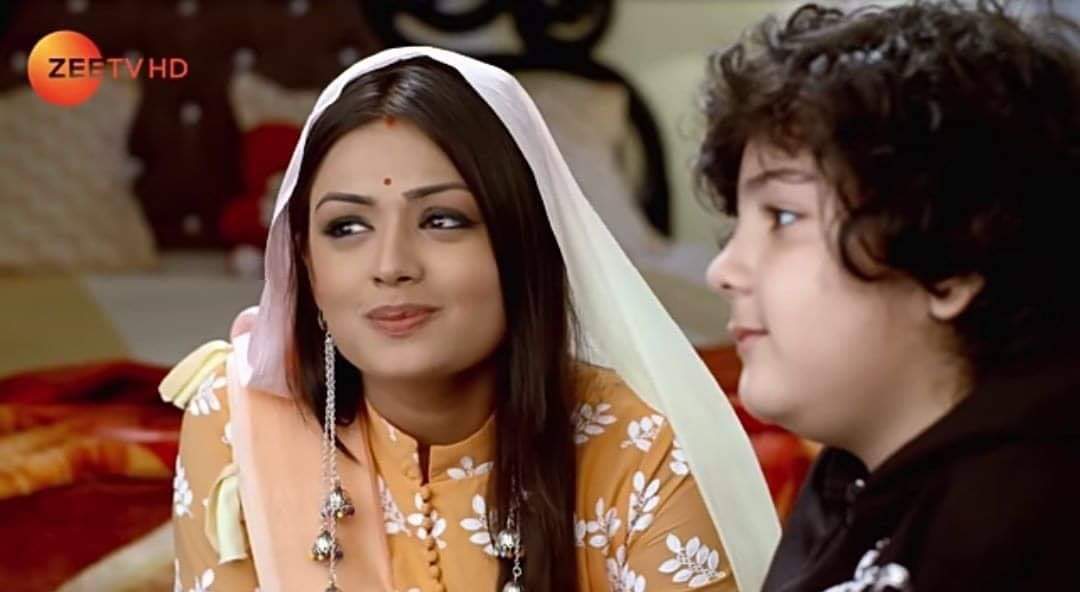 The episode starts when Shaurya hired the nurse which welcomes Neev home. Karona says this nurse is Bhaskar and he will look after Neev. Shaurya/Armaan asks to take Neev to his room. Mahek says to Shaurya he doesnt look like a nurse. Shaurya says even you look smart and literate but you are not. Mahek is hurt hearing it. Shaurya and Armaan get a call from his man, the man informs him about event on 26th January whose contract Shaurya’s restaurant has gotten.

Neev lies in bed. Shaurya and Armaan calls Muslim girl and says white chilies have got contract of home minister’s event on 26th January so the bomb blast which we planned to do in minister’s daughter’s wedding, we have to do that blast in 26th January event, Shaurya says we planned for later but we have to grab opportunities God gave us, be prepared, girl says we are fully prepared.

Neev is lying on bed and hears his plan, he thinks I have to tell this to Mahek Ma otherwise this villain will kill everyone, Mahek maa too. Shaurya’s girl partner says we will win for sure. Shaurya sees Neev but Neev acts like sleeping. Shaurya/Armaan says to nurse that handle this Neev, dont let him talk to anyone, Mahek shouldnt be near him, I have to work on a mission then I will handle this Neev, nurse says dont worry, I will handle everyone in the house. Mahek comes there. Shaurya and Armaan say nurse take care of Neev, he leaves. Neev opens his eyes and sees Mahek there, he sees nurse glaring at him.

Neev tries to call out to Mahek but Mahek is working on herbal medicine, she asks the nurse to bring water, nurse shows to Neev that his eyes are on him, he glares at him and goes to bring water. Neev sadly looks at Mahek working on herbal medicine. He tries to tell Mahek that hero is not hero, Mahek says you are talking about some bad man? who is it? Neev tries to tell with pulling on like mask but nurse comes there and says Neev can write and communicate what he wants, Neev tries to pull off like mask, he panics. Mahek gets tensed, she calls doctor, a doctor gives him medicine.

The doctor says he had a panic attack, he is a kid and is worried that he can’t talk, its normal. Mahek says but he panicked a lot, he was forcing his skin out like taking away mask, he was in pain. Doctor says he is in trauma, you have to keep him happy, keep him rested, he has to come out of the trauma of the accident, he leaves. Mahek cries seeing Neev, Karona consoles her. Shaurya meets muslim girl from white chilies, he says we have to make this mission big, we have to make our name, we will destroy everything. Muslim girl sees Vicky and says what about Vicky?

Shaurya says to Nalini that we have to make things happen fast, we have a lot of enemies, Nalini asks why he hired a male nurse for Neev? I could have brought my sister to join the mission, Shaurya says I dont trust you, women, you can have melt of heart anywhere, Bhaskar will not hesitate to kill him if things get out of hands, Nalini silently leaves.

Nehal says stop blaming yourself, Neev is a kid, he got hurt playing, we should go to market and bring balloons for Neev, Mahek says but I have to be with Neev, Karona says I am with Neev, I will take care of him, you go to market with Nehal. Nehal says I will call Kanta and Mansi so they can bargain. The nurse calls Nalini and says think about Neev, if I didn’t give him injection then we would have been in trouble.

Nalini says to Shaurya that I have learned the layout, Shaurya says to think about who will have which duty and how we will work, Nalini starts working. Vicky calls for Nalini’s CV from his manager, he gets it. Vicky looks at Nalini and thinks there is something fishy, I should find out. Vicky calls his friend and says you were in Star Hotel right? I want to know about some ex-employee, he ends the call and sends Nalini’s details. Mahek, Nehal, Kanta and Mansi comes to market.

Kanta says its good that Mahek came here and will not be sad. Nehal says we should get ice-cream for Neev and all people of family, Mahek says do it fast. Nehal looks around, she sees Nalini in veil with some men, she tries to recognize her face. Nehal says to Mahek that isnt that Nalini? They go to Nalini. Mehek 17 September 2019 Written Update On Zee World

Nalini is about to take off her veil, Nehal puts a hand on her shoulder from behind and says Nalini? The woman turns to Nehal and is not Nalini but someone else. Mahek says sorry, we got confused with someone else. Nehal thinks I am sure I saw Nalini here. Vicky talks to Nehal, Nehal tells him how she thought she saw Nalini in the market, Vicky says even I am suspicious about her, they both think something is fishy about her.

Vicky gets a call from man who he asked for Nalini’s information, he gets more information about her. Armaan comes to his den where Shaurya is kidnapped. Armaan says we have prepared for this day, we have to destroy this government. Armaan says we have got this chance, Shaurya’s restaurant got the chance to host 26th January event, he says we will blast in that event and then we will have peace when blood sheds, we will get freedom after 3 days. Shaurya is caged and hears all that.

Neev wakes up. Mahek hugs him and says how is my Neev now? Here are these toys and chocolates for you. Do you like them? He hugs her. Mahek gives him milk. Vicky comes in. Nehal says I saw nalini in a veil. She isn’t a good woman. Vicky says she gives weird vibes. Mahek says maybe she is from a rival restaurant. I don’t knoww what Shaurya will say about it.

Shaurya says to Arman you are all criminals. No God asks anyone to kill humans. People like you defame your religion. God is with me. Arman throttles him and says shut up.
Deep shoves him. Arman says our mission will be accomplished soon. Shaurya says we will see. Arman says to his people less than three days are left to keep your focus on work only. His men are packing boxes. Shaurya sees something that fell from Arman’s hand. he hides it.
Arman comes in. Mahek says you here? He gives Neev a teddy bear. Neev is asleep. Arman says there is a camera in this bear. If you have to leave this room you can see what happens in this room. Vicky comes on the breakfast table. He says there is something wrong. All the vendors chosen by Nalini are new. She has fired all the previous ones. There is something wrong. Mahek says I will come to the restaurant and check whats going on.

Arman hears it. Arma says to Nalini Vicky doubts you. You need to be careful. Arman says there should be no trouble. Mahek will come to restaurant too. She says your mask is lose. She tries to fix it. Mahek is coming towards the restaurant. Mahek sees them sitting together. Nalini says ma’am you here? Mahek says shouldn’t I be? She says of course you can be. She leaves. Shaurya says I sent the other chef to you. Why are you being so careless? Mahek says chachi and Nehal are there. I have to handle the work here as well. the event is day after tomorrow.

Mahek says so you don’t even know her personally and you were talking about her qualities. Shaurya says don’t waste my time. Mahek says she is hiding something. She doesn’t give good vibes. Vicky also felt that. Shaurya says that Vicky is a loser. He always blames others. Mahek say what happened to your neck? he says nothing and leaves. Shaurya asks the guard for a cigarette. He says shut up or I won’t even give you water. Shaurya says give me, please. He gives him. They give him a cigarette. Shaurya smokes. All the thugs get back to their work.