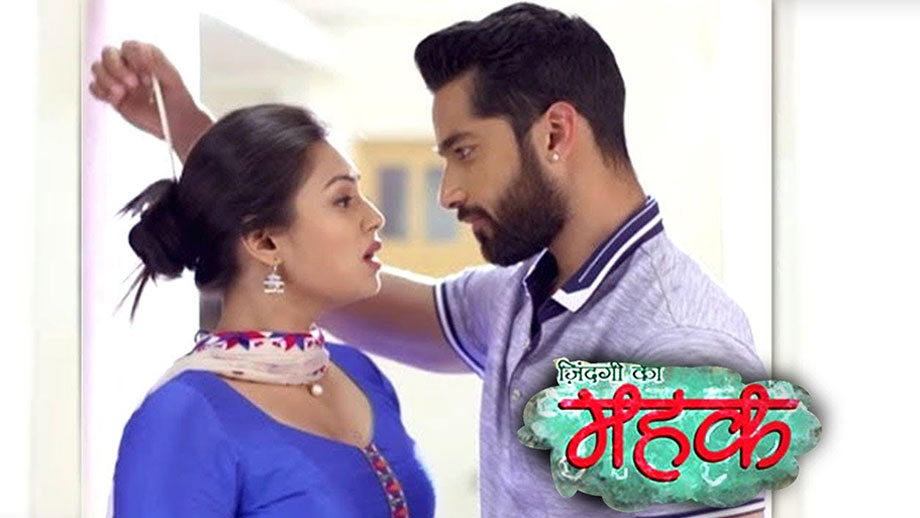 Ravi brings Jeevan back to home and everyone is happy to see him back…kanta goes and checks his wounds and cries and he tells is ok and alive …dadu ask is he ok or not…he tells just think he fell from terrace… Sonal and Kanta nurse his wounds and Mansi goes to bring turmeric Milk…dadu asks where is MAHEK…Jeevan tells she went to WC as she has mortgaged the property without his knowledge…kanta gets worried thinking it can create misunderstanding between them…Nehal tells Shaurya is intelligent and he will support Didi after knowing the situation.

Nehal eyes turned red and Sonal gets worried. Shaurya reaches home and scolds the guard …karuna and also comes and sees that their bags were thrown in the hall… Shaurya shouts for Nikki ..Mahek and Aawara…Mahek comes and he holds her and asks that with whose permission she sold WC and now at home, our bags are thrown like this and don’t tell me you don’t know anything .. tell me what is happening…Nikki comes and tells I will tell you…Maasi tells I know this b*t*h will bite us one day that’s the reason she send us to SPA…

Mahek tells we have trusted you…Nikki tells I have gained your trust…and it all happened because of you Shaurya…I have proposed you in spite of being a girl but you rejected me…But I understood that you never wanted to get married…but what did you find in this dumb girl that you married her and later you called me to join in the competition… and that day I have decided I will destroy you… Shaurya tells you aren’t that Nikki who was my friend…Nikki tells don’t be so shocked Shaurya…the I haven’t revealed Everything… your wife has sold this house also …and now you don’t have any balance also…so now you go on the road and beg on the roads…and make a mandir and put your wife as a statue in it… Shaurya was about hit Nikki when someone holds his hand …it’s Ajay who is Nikki’s partner.

Ajay tells we have purchased your cheap restaurant Instead of telling thank you are trying to hit her…Mahek asks Ajay you are here … Ajay tells yes are you not happy seeing me here …now you can hug as I make extra money than your husband… Shuarya holds his collar and tells I have done a mistake by letting you go …I should have killed you on the same day. .he holds his neck and Pammi and Rohit and tells to leave him…Ajay tells how he met Nikki and they both planned to destroy him… Mehek 18 July 2019 Update On Zee World Series

Nikki tells I thought you will sign after the rats incident but …Ajay tells Shaurya has got blind in her love..Nikki tells that’s the reason we have targeted Sharma’s and Ajay tells how they trapped Mohit and kidnapped Jeevan as they felt Shaurya is strong they can’t attack him but it was easy to target Sharma’s..

Ajay says that Mahek you might be rich but you remain cheap girl of old Delhi. He says now this is our house. Niki says we will rule this house and they can have rest now. Ajay says Shaurya can become our servant and Mahek can be our cook, I will taste her every dish, he caresses Mahek’s lustfully and licks his fingers, Shaurya grabs his collar and says I will beat you to a pulp if you dare touch my wife.

Sheetal’s son Rohit says to Shaurya that leave my brother or else I will beat you a lot. Niki asks Shaurya to stop all this drama, we have your everything now. Niki throws papers on Shaurya’s face and says Mahek have signed papers and have given all your property, wealth and restaurant to me, you are with nothing so get lost from here. Niki and Ajay call their guards and makes them throw Khanna family out of the house.

At Kanta’s house, Sonal calls Mahek but she is not picking up. Everyone is worried as Mahek used Shaurya’s money without even telling him. Kanta says I know there will be tension between Shaurya and Mahek but Shaurya takes our family as his own so he will understand and will come around soon, I trust him.

Mahek says to Shaurya that listen to me, Mohit. Shaurya says to hell with Mohit, I told you to throw Mohit out of the house but you didn’t want to listen, you want to become great every time, I can’t believe I have lost my everything because of your family, Karona says at least listen to her, Shaurya says what should I listen? her useless family might have done something stupid again.

I am on roads because of her, her family is clever that they took my everything and made me give it to Mahek, I never thought I would say this but I regret the day I fell in love with you Mahek, I dont know why I stopped hating you, Karona says you wil regret saying all this Shaurya. Shaurya says to Mahek that because of you my ill mother is on roads, you just keep worrying about your family, their problems their everything matters only, your useless uncles are good for nothing, Mahek says please listen to me.

Shaurya says shut up, He asks Vicky to take family to somewhere, Shaurya asks Mahek to go to her family whom she loves way too much. All family members sit in cars and leave. Mahek says Shaurya please let me explain that Mohit.. Shaurya ignores her. Mahek breakdowns and cries on floor. Shaurya says I should talk to my old lawyer, he calls his lawyer but his number is switched off. He calls someone else but no one listens to him.

Shaurya meets his old investor but he says I cant help you with anything. Shaurya goes to another investor, investor says bring a new proposal and I will what I can do, Shaurya looks on as he doesnt have any money.

Shaurya walks on street in daze. He recalls Niki taking his everything, saiyan ve plays.

Rajesh Khanna meets inspector, inspector says papers are legal and Mahek have signed them, its all in Niki’s name now. Rajesh says my son is a fool, he has become puppet of women again. Shaurya says Niki was my friend but she was involved with that Ajay and took my everything with fraud. Inspector says there is no proof of fraud so we cant to do anything.

Rajesh says how the hell can you say that you cant do anything? that Niki with Ajay did fraud using Shaurya’s illiterate wife, I wan justice, he gets hyper and says I want my property, he breathing hitches, inspector asks Shaurya to take him to hospital. Inspector says to Shaurya that this is a case of fraud but we need some proof to start working on it.

PD asks Jeevan to go and take rest. Jeevan says I am worried about Shaurya. Ravi says I will go to her house and ask her if she is fine. Mahek comes there, she is a crying mess, all are stunned to see her state. Mahek sobs and says everything is finished. Kanta asks what happened? Mahek says Shaurya wont forgive me ever, that Niki was involved with Ajay, everything is destroyed, she did fraud and made me give her everything that Shaurya named to me.

She tells them how Mohit got involved with goons, how Niki made her sign property papers and how they threw them out of the house. Mahek says how can I be such a fool. Ravi says I won’t spare that Ajay and Rohit. Nehal that I doubted that witch Niki from the first day. Mansi gets a call from someone and she switches on the TV.

Sharma family watches TV, the reporter on TV says that Shaurya’s everything is finished, he has come on the road without any shelter or money. Mahek sees Shaurya on TV, reporters surround Shaurya and ask him if he lost his everything and is penniless now? Shaurya says no comments. Mahek cries seeing his state. Shaurya screams at reporters and asks them to leave him and his family. Karona cries being asked questions from the reporters.

Kanta says this is all happening because of me, I brought Ajay’s proposal for Mahek, I gave birth to that useless Mohit and I made Shaurya give his property to Shaurya, it’s all my fault. PD says it’s not time to cry, let’s go with me, Kanta says where? PD says I am seeing we are crying and when did we become so weak? lets go with me, we are going on a battle, I will see who can stop us from conquering.

Shaurya brings his family’s luggage and says to family that let’s go from here. Rajesh says that there is no one for us to help when we are in need today. Shaurya sadly says let’s go. Luggage slips from Shaurya’s hands and is about to fall down but Mahek comes there and holds it, supporting him to stand up, Shaurya looks on and sees whole Sharma family standing behind Mahek there to support Khanna family. More Update Coming Later…