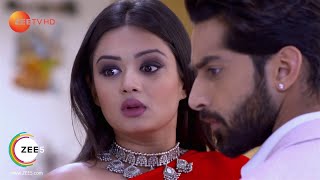 Today’s episode starts with Sharma family all having breakfast on a roundtable. On the other hand, Mahek sadly looks at Kanta’s closed room door. Jeevan says, don’t have hopes, she will come out of her cave when she wants, don’t stress yourself. Shaurya comes there with papers. All see him, Nehal says I haven’t seen such desperate groom, he keeps coming to his inlaws house, Shaurya nudges Nehal’s head. Shaurya says I have come to meet Kanta, Ravi says what if she says bad things to you? Shaurya says so what? she is my mother, she has the right to scold me. Balwant says more problems are going to happen.

Shaurya comes to Kanta’s room, Kanta says you came again? Shaurya says people don’t trust me and I used to never trust anyone but then Mahek came in my life and I even started to trust God, I told you that I just want Mahek happy and her happiness involve you, she loves you more than herself, for Mahek’s happiness, I agree with all your demands, Kanta is stunned. Outside Kanta’s room, all are tensed that Kanta and Shaurya haven’t come out.

In the room, Shaurya shows papers to Kanta, she sees his will, Shaurya says I do everything with focus and honesty, i was doing business for my benefit, when I get angry I destroy myself and others and now when I am loving so you can understand that how much I will love Mahek.

Kanta sees papers and is shocked. Shaurya says I just want to love Mahek, I know her happiness is you and your happiness is Mahek’s future so I have done what you wanted. Shaurya says to Kanta that whatever was in my name, I have given that to Mahek. My property, my restaurant, my money, everything is in Mahek’s name and when we will have kids after marriage than 50% will go to them, I and my family will not have any right on all of this.

This is total of 150crores and it will be all of Mahek, you are scared that I might repeat mistakes so see I have solved all your problems, one thing I have not given to Mahek, that are my 15 clothes, I mean they are useless to Mahek.

Kanta feels guilty and recalls how Mahek kept telling her that Shaurya has changed, how Kanta said that Shaurya will throw her away again, how she trapped Shaurya in the fake kidnapping case, Kanta thinks that i couldn’t see his truth, what happened by me? Shaurya turns to leave but Kanta holds his hand and says stop.

Kanta cries and says where are you going? I scolded you so much, I made you lose blood but you didn’t back away, how will Mahek find such nice guy? she pulls him and hugs him, she cries on his shoulder, Shaurya smiles, Kanta says forgive me, I kept thinking wrong about you, won’t you forgive Maa? Shaurya says don’t say sorry, just bless me, Kanta says i stooped so low, I was wrong, I lied, I hurt you and kept thinking that i was right, forgive me please, one minute. Mehek 19 June 2019 Update On Zee World Series

She gives will back to him and says I don’t need it, you said so I trust you that you will keep Mahek happy always, I dont need these papers. Shaurya says they are needed, these papers can stay with you, it doesn’t matter if the property is in Mahek’s name or mine when Mahek is mine herself. Kanta smiles and kisses his head.

Kanta gives will to Shaurya and says it’s not needed, Shaurya says it’s needed, it doesn’t matter if Mahek has property or me when Mahek is mine herself. Kanta caresses his face and says be happy always, Shaurya says don’t cry, let go out, all must be tensed, she nods. Shaurya brings Kanta out of the room, all Sharma family members are tensed. Mahek is worried, she asks what happened? Kanta says you don’t have peace, cant i talk to my son in law for a minute? Mehek 19 June 2019 Update On Zee World Series

Mahek says but what talk.. she stops and says son in law? means? she smiles in shock, she says Chachi? Kanta nods and hugs her, all smile. Nehal and Mohit hi-five, Kanta says we did many mistakes too, its time to rectify them, Jeevan checks Kanta’s forehead and asks how she cooled down? Kanta says Shaurya would publish book about it, all laugh, Kanta asks Mahek to forgive her, you were right, Shaurya has changed. Mahek says elders dont say sorry, they just bless younger ones and if you hadnt done that then we wouldnt have realized how much we love each other, she lovingly looks at Shaurya, Kanta gives Mahek’s hand in Shaurya’s hand, they touch her feet, Kanta blesses them, Shaurya smiles at Mahek. 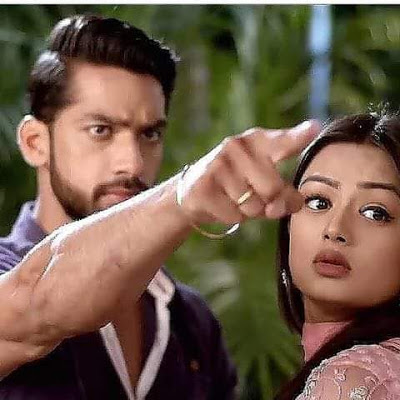 Mahek thanks Shaurya in her room and says i dont know how you pacified Kanta chachi but you dont know how much happy you have made me, Shaurya says make me happy too, i have the party in the restaurant tonight, i will send dress for you, just wear it and come, she smiles.

Shaurya arrives at the restaurant. Mahek is working at a food truck. Kanta asks her to not work today, your saree will be spoiled. Ravi says Shaurya has arrived, lets leave. Shaurya comes there, Karona asks Kanta how is she? she says i am fine now. Shaurya looks at Mahek and says wow, there must be some accidents in your society seeing you. Karona sees same car coming there. Shaurya puts a hand on Mahek’s back and grabs her waist, she glares at him and asks what he is doing?

Mahek smirks at him. Karona stealthily comes to car and says i told you to not come near us, just call me for whatever you need but dont be seen especially now that Shaurya is getting married, past’s shadow should not cast on Shaurya again, he is starting his life afresh. Mehek 19 June 2019 Update On Zee World Series

All come in Shaurya’s restaurant. PD scolds waiters to work nicely, PD says i left my phone at food truck, Shaurya says we will bring it, Shaurya drags Mahek with him. PD says he just need chance for romance, took her in lure of getting my phone, all laugh.
Shaurya brings Mahek to food truck, Mahek tries to search for Pd’s phone but Shaurya pulls her closer and puts hand on her bare waist, she says thats why you gifted me this saree?

We are getting late, Shaurya says party was to keep your family busy, your party is with me, Mahek says can i tell you a secret? what i want to do right now? he says what? Mahek says close your eyes, i will blush if you keep staring at me, Shaurya closes his eyes. Mahek cups his face and leans in towards his lips, Shaurya smiles sensing she is about to kiss him but Mahek slaps him gently and runs away. Mahek pushes him away and starts running, Shaurya runs behind her and says paratha girl stop.

Mahek is running away from him on road and is about to get hit by a car, Karona sees this and gets shocked, Shaurya shouts for Mahek, Mahek stops before car can hit her. Car runs away, Shaurya says blo*dy hell, he throws stones at car, he panics seeing Mahek’s hand bleeding, Mahek says i am fine, Shaurya wipes her hand, he shouts on security guard that why i pay you? bring first aid box. Mehek 19 June 2019 Update On Zee World Series

Mahek says why you are shouting? i am fine, Shaurya says there was a car in my parking lot and security didnt know, they are useless. Guard brings first aid box, Shaurya band aid’s Mahek’s hand, Shaurya says to guard that see CCTV footage and tell me number of that car then i will not spare that car. Karona asks him to calm down, so much anger is not good for you.

Sharma family comes there, Kanta asks what happened? Mahek says its just small wound, Shaurya says its not small wound, he gets angry, Mahek says calm down, its nothing, please we are here for party, Shaurya looks away, Mahek pulls him and hugs him tightly, he calms down. Karona says yes that car driver was fool, we should enjoy party, they go in the restaurant.

Reporters are in restaurant, the reporter asks Shaurya why they are marrying twice? Shaurya says first time when i married Mahek, i didn’t know importance of marriage but Mahek made me realize it so i am marrying her again. One reporter says that there is another surprise we heard? Mahek asks what surprise? Shaurya brings Mahek to his business partners, he introduces Mahek to his business clients, Shaurya says this is my Mahek, one client says Shaurya you are lucky, you have got gorgeous wife.

Shaurya pulls Mahek closer and says not gorgeous but most gorgeous, Mahek blushes. Mahek excuses herself and goes to Kanta’s table. Mahek asks her family why they are sitting on back seat? lets meet everyone, Kanta says how will be mingle with that people, we will enjoy here, Ravi says only PD is enough for this party, if we start irritating Shaurya’s hifi guests then they will start crying, all laugh.

Svetlana says to guests that meet Mahek, she is going to be marrying Shaurya second time and is his only wife, I have to say that shaurya tried to leave you but you trapped Shaurya nicely. you have come to marry him again, Shaurya comes there and grabs Mahek’s hand, he angrily glares at Svetlana, he says Mahek lets go, she can spit poison only.

Svetlana holds Mahek’s hand and says sometimes poison is important, i hope you are not doing mistake again, i mean you know Shaurya nicely now, his goodness and badness and his past and all things regarding his past, Karona gets tensed hearing about his past.

Karona comes to Svetlana. Karona asks Svetlana to not make drama here if you cant be part of happiness, Svetlana says i have not created any drama till now, you want to see drama? you want it here? then have it, she throws wine on Mahek’s face, all are shocked, Shaurya fumes in anger seeing it.