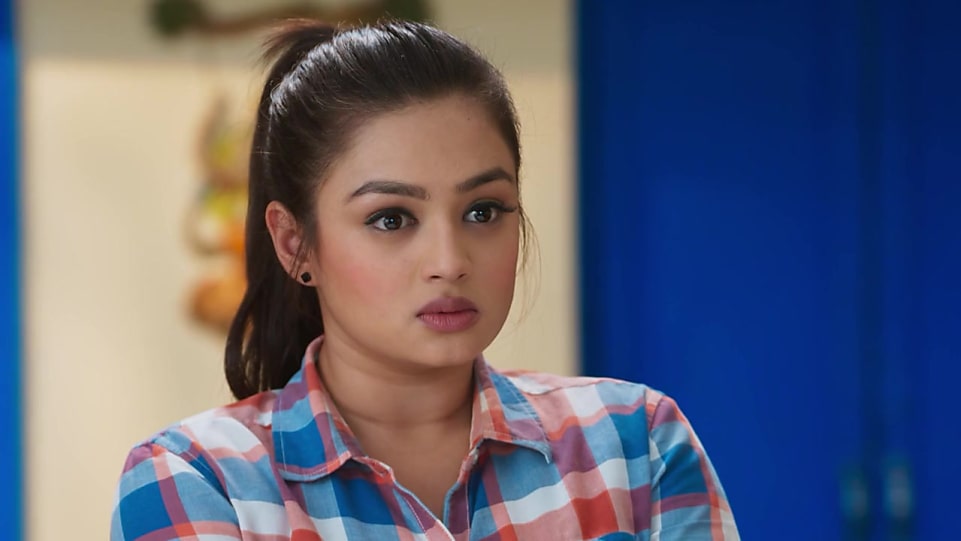 Ajay and Rohit come out of Sharma house, he says once these firecrackers start working then their stock will be destroyed with this toxic chemical. Ajay lights firecracker and is about to throw it inside the porch of Sharma house. Sharma family is sleeping, they hear firecrackers noise and wake up. Mahek says its Ajay. They come in porch. Rohit is scared with the plan but Ajay convinces him.

They light crackers and before they throw it in porch but before they can leave the porch, they can be surrounded by firecrackers themselves and screams to get saved. The family sees Ajay and Rohit trying to get away from firecrackers, Shaurya laughs, they runaway. Shaurya says to family that I saw them from a terrace and knew their plan so our stock is safe, I was sitting on the terrace since morning and was not tired too so I was on the terrace, he taunts Mahek that I am useless that’s why I stopped it, Balwant says who say you are useless?

you are our army man, our protector, Harish says he is my son after all. Mahek shyly says sorry to Shaurya for making fun of him, he says what did you say? Mahek says sorry, Shaurya smiles and says let’s go to sleep.
In the morning, Sharma family members pack lunchboxes, Jeevan and Ravi set their cycles. Mahek applies tilak to Jeevan, Ravi, and Shaurya. Shaurya says I will ride cycle too, Ravi says no your work was to bring our project and now it’s our work. Jeevan and Ravi start their cycles, they are accompanied by rickshaw in which Shaurya and Mahek have lunchboxes.

Jeevan and Ravi are selling boxes on cycle. Ravi and Jeevan get stuck in traffic, Shaurya and Mahek lose their sight and they get separated. Ravi and Jeevan take another route but they are stopped by some goons, Jeevan says let us go, we have deliveries. Ajay and Nikki come there with more goons, Jeevan and Ravi get tensed. Ravi says to Jeevan that this is not good.
In the rickshaw, Mahek says to Shaurya that I am worried, something wrong is going to happen, Shaurya asks the driver to drive faster.

Nikki says to Jeevan and Ravi that we were waiting for you, let us see what you have inboxes. Jeevan says to Ajay that yesterday women of my house beat and today Shaurya will beat you if you don’t leave. Ajay says don’t brag about your son in law, you are powerless here, don’t argue else you would get your bones broken. Nikki says if you people don’t surrender then you would get bones crushed.

In the rickshaw, Shaurya and Mahek are tensed and pray to find Jeevan and Ravi. Mehek 24 July 2019 Update On Zee World Series

Karona says to Kanta that don’t worry after today everything will be fine. Kanta says don’t know my heart is beating faster, Mansi says to her that your heart keeps beating for someone in house every day, Kanta says I just feel something is not right, Karona says we can call them and ask, she asks Nehal to call Jeevan.

Ajay says to his goons that destroy their lunchboxes, Ravi and Jeevan try to stop goons and tries to fight them. Nehal is calling Jeevan but he is busy in a brawl. Nehal calls Mahek, Mahek is in a traffic jam, she doesn’t take the call and says don’t know what is happening. Shaurya asks the driver why he is not driving faster? The driver says I am no Rajnikanth, we are stuck in a traffic jam. Shaurya asks Mahek to not take Nehal’s call, the family will get worried.

Mahek says sometimes Ajay do something, sometime we get stuck in traffic, what is happening? Shaurya asks the driver to get down from rickshaw, he sits in driving seat and makes the driver sit in the backseat, Shaurya drives rickshaw faster. He stops at the signal and asks Mahek to get down, she says what about you? he says just get down. Mahek gets down with rickshaw driver. Shaurya drives away to site where Jeevan and Ravi are fighting Ajay’s goons.

Ajay’s goons start beating Jeevan, Ajay laughs and says now you are under our control. Shaurya arrives there, he holds Jeevan and pulls him back. Ajay says come on Khanna, you will get death today, Shaurya starts beating Ajay’s goons. Nikki says gets tensed and says to Ajay that let’s go back.

Ajay sits in the car and tries to drive away but Shaurya comes in front of his car and drags Ajay out of the car. Mahek arrives there too and rushes to injured Jeevan. Shaurya starts beating Ajay and Rohit. Some goons try to grab Shaurya but he pushes them all away. Nikki hides behind the car, Mahek sees her, she tucks her dupatta and grabs Nikki from hair. Zee World Update: Mehek 24 July 2019

Shaurya takes hockey stick and beats them all. Mahek keeps slapping Nikki across the face. Police arrive there. Shaurya rushes to Mahek and asks if she is fine? Ajay and Rohit run away. Ravi says to inspector that we were attacked, Shaurya came to save us. Mahek asks a rickshaw driver to forgive them for taking their rickshaw, the driver says I don’t want to complain, inspector, my rickshaw is fine, police leaves.

Jeevan sees his and Ravi’s broken cycle. Jeevan says how will we take boxes to the contractor now? we don’t even have time, we will lose this contract, Shaurya punches Ajay’s car that he left there and says everything is destroyed now! I will kill them, Ravi says everything is finished. Mahek says no there is still time, you all take boxes, I am going, Shaurya asks where? Mahek looks on. More Update Coming…