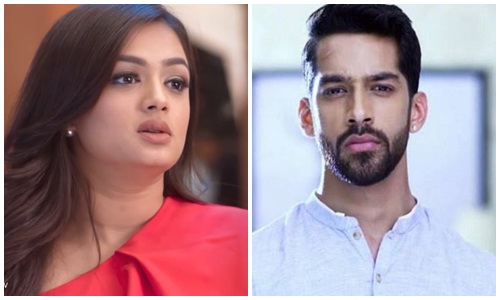 Today’s episode starts in the morning, all family members are waiting for Gopal function to start. Mahek goes to bring a scented candle. She takes it from the stand but other things fall from her hands. She says I am clumsy. Sharma family comes out of the house and see Gopal’s function going on. Kanta prays for their problems to be solved in Gopal.

In the house, Mahek is cleaning things she mistakenly spread on the floor. She finds a newspaper in it, she is shocked to read it, her eyes bulge out of sockets reading something on paper.

Gopal function ends, Sharma family goes in the house back. Mahek comes to family huffing, she says Mohit. Mohit is in Raj Bimla.. all are stunned. she shows newspaper to Shaurya, there is a picture of the event in Raj Bimla in which Mohit is seen in the background. Shaurya says we should go there soon, Mahek thanks Gopal for helping them. Kanta says I pray that you both get successful.

Mahek gives her cash to use. Kanta says in childhood, you, Mohit and Nehal used to play hide and seek, he used to hide anywhere and tense us, even today my son is creating a problem for all of us, Mahek says we are all responsible for his state, he didn’t stray away, he just wanted to give a good life to his wife and baby, don’t worry we will bring him back. Jeevan says we have Shaurya, he will make everything fine, we are getting habituated to Shaurya, Shaurya smiles.

Digvijay comes to Sharma house. He gives tickets to Shaurya and Mahek. Digvijay says, this picture in which Mohit is seen, its of an event of Janmashtami there, Mahek says we have to find him in the event? Harish says then we will get AC in our house, Mahek and Shaurya please search him fast, Balwant laughs at him. Shaurya takes Pd’s blessing, PD says take care of yourself and my Mahek. Mahek says to Sonal that I promise you, we will bring Mohit back.

There’s a cross over of episodes from another show to Mehek….

Nikki and Ajay come in festival wearing burqa and veils. Mahek sees Nikki in the festival, she says oh God she is here? She sees Nikki hiding her face in a veil and says I can’t wait till Tejaswani performance ends.

Tejaswani starts dancing at the festival. Mahek joins her. They both dance around for Gopal. Shaurya is looking around the festival. Shaurya sees someone running away in the veil, he runs behind them. Mohit is there too dressed as Sardar but Shaurya doesn’t see him. Tej’s performance ends.

Sharma family are at the temple, Sonal prays to the lord that help Shaurya and Mahek so that they can bring Mohit back home. Sonal takes Mansi’s blessing, Mansi says your baby will be a blessing for us. Kanta says we should. Dolly is with them too. Sonal says I am tired, can I sit here for some time? Mansi says okay I am going to see a cow, Dolly says I am going to bring clothes, they both leave.

Sonal sit down, one kid comes to her, she cries and says I lost my parents, Sonal asks her to not cry, we will find your parents. She starts looking for the baby’s parents and leaves her spot. Kanta, Mansi, and Dolly come back and doesn’t find Sonal in the temple, Mansi says where is Sonal? I left her here, they start looking around.

Shaurya says to Mahek that don’t know where Ajay and Nikki ran away. Let’s search for them.
Ajay and Nikki are wearing a burqa, Mohit is in disguise of Sardar, he strikes with Ajay and Nikki in the festival. Ajay says, Mohit? where were you running away? Mohit pushes them away and runs. Ajay says he can’t run away much, we will catch him. Shaurya sees Ajay and Nikki from far and says I knew they would be here.

Mohit hides from Mahek and Shaurya. Mahek is worried and says where will we find him? Shaurya says I think he is not here, they go from there. Ajay and Nikki come there, they find Mohit and grabs him before he can run away. Nikki says if you runaway again then you won’t be able to become father, I have to show you something.

Nikki shows him the video in which Rohit has kidnapped Sonal, Rohit says Mohit see your wife is with me? do you want me to take her with me to home? Mohit sits in Ajay’s feet and says please don’t do anything to Sonal and my baby, I will do anything, Nikki says then do what we want, don’t run to your family, run away from your family and don’t ever come back to them, Mohit nods and leave.

Ajay says to Nikki that Mohit is coward, he won’t come back, Nikki says but Shaurya and Mahek are still our problems, Ajay says then we should finish this problem once and for all.

Mahek sees Kanta calling her, she takes a call, Kanta says they took away Sonal, they kidnapped her, Mahek is stunned.

Mahek and Shaurya are leaving the festival in the car, Mahek cries and says we couldn’t do anything, we couldn’t find Mohit and Sonal is kidnapped too. Shaurya says don’t worry, we will find Sonal. Kanta is at Sharma house, she calls Mahek and cries saying Sonal is not home. Sonal enters Sharma family house, all are stunned to see her berated state, Kanta says to Mahek that Sonal is home, don’t worry about her, she ends the call. Mahek is in the car with Shaurya, Mahek looks ahead and is shocked, before she knows it, their car strikes with another car and they have an accident.

Police and ambulance rush to their car. Car flies off from cliff in a deep ditch. In hospital, inspector says to media that there was accident on highway, girl in car was murmuring some Shaurya name, she is admitted, we couldn’t find man’s body, speculation is that he fell off from cliff, girl had address of old Delhi in her purse, we are trying to contact her family.

In Sharma house, Jeevan says Mahek and Shaurya are not taking calls. Nehal says even Digvijay doesn’t know where they are. Kanta says how can they be so irresponsible? they are not like that, Karona says what if something happened to them? Kanta says please don’t say like that. Ratan comes there and asks them to not worry, Jeevan says Shaurya and Mahek were coming from Gujrat but are not taking our calls, Ratan says they will come back don’t worry, let’s go on the street and celebrate independence day. Mehek 27 July 2019 Update

Mahek cries and says they are not letting me go to Shaurya, where is he? Kanta cries, Jeevan asks her to not cry, Digvijay says we will talk when you are feeling better, Mahek says I am fine, just tell me where is Shaurya? Jeevan says Shaurya is missing from the accident site, Digvijay says it’s difficult for Shaurya to be alive after the accident, Mahek says you are wrong, this cant happen, he is fine, Digvijay says I wish he was.

The nurse brings a bag and says it has a wallet and blood-stained shirt found at the site. Mahek snatches it from her, she runs to the washroom and locks herself. Jeevan and Kanta bang on the door and asks Mahek to come out but she sobs inside. Mehek 27 July 2019 Update On Zee World Series

Sharma family are crying in their house. Kanta can’t stop crying, Jeevan asks her to not cry. Mansi says, how this can happen with my son? Dolly says Karona is just crying in her room, Sonal says PD is not even talking. Kanta says Mahek has locked herself in the room, how can God be this cruel? how to pacify her. Harish gets angry, he says they have snatched my son from me, I will make their lives hell now, Digvijay is bringing police now.

Ajay offers wine to his company, he says its time to celebrate, all enjoy wine, Ajay says I feel like today I got free, the biggest prick of my life is gone, Shaurya enjoys your life after death. Ravi comes there with the inspector, Digvijay, and Ravi. Ravi says inspector punish them otherwise I will strangle them, arrest them. Ajay says arresting is not like buying wine, Nikki says whats our fault? Inspector says you both are under arrest for killing shaurya. Ajay says what Shaurya’s murder? I am an innocent man, Ravi says I know how innocent you are.

Digvijay says we have proof, Nikki and Ajay went to festival which Shaurya went too and they planned his murder there. Nikki says to Harish that we went there but we didn’t kill him, Harish says I know you killed him. Pammi says I will hire the biggest lawyer of India and file a case against you, Digvijay says that’s not possible because I am fighting the case from Sharma family, inspector arrests Ajay and Nikki.

Kanta says to family that Mahek is not coming out of her room, she is not even eating or drinking, how can God be this cruel with us?

Rohit, Ajay, and Nikki are getting beaten in the police station. Inspector says to Ajay that you have to tell truth otherwise we will keep beating you. Nikki pleads policewoman to stop beating her, she didn’t kill Shaurya. Ajay says to inspector that I don’t like Shaurya but I don’t know anything about Shaurya. Inspector says the one who hit Shaurya’s car, he was arrested and told us that he took 2lacs from people who were wearing burqa and veils, and you were seen wearing veil and burqa in the festival, we can connect dots that you are behind all this, he beats Ajay more.

Ravi says to family that Shaurya wouldn’t like to see us like this, we have to be strong for Mahek, Karona says our tears are not stopping, what can we do. Kanta says God take my life but give Shaurya back. Jeevan says if that is possible then I am ready to give my all lives to bring him back, all cry and mourn over Shaurya’s death. More Updates Coming Soon!