Mehek 2nd May 2019 Thursday Update: KD comes out of car, Vaitlana taunts that Shaurya keep barking. Shaurya says its good that nothing happened to my mother otherwise i wouldnt have spared your ex-boyfriend. Vaitlana says he is my ex husband and current date, mind your own business. Shaurya says your current husband is in jail and ex-husband in your arms, bl**dy frusto..

Vaitlana says how dare you.. she is about to slap him but Shaurya grabs her hand. KD says chill and lets, Shaurya calls him dog. KD says you need rest, go and take rest, dont forget to read newspapers tomorrow, i am going to print something special for you. He hugs Vaitlana and says i should leave, she says bye darling, Kd leaves. Mehek 2nd May 2019 Thursday Update

Is morning, Shaurya is jogging and recalls Kd’s words. Rajiv comes to him and says our concept of opening new restaurant is being stolen, Shaurya smirks and says intersting, he asks Rajiv to find some good chef, Rajiv thinks. Rajiv thinks about getting Mahek on board.

Rajiv and Shaurya comes to Mahek’s house. They are served refreshments. Rajiv praises her dish, and asks where is Mahek? Mahek comes there and dances around Kanta, she says there is one good news, she says to Shaurya that you were right, we should keep steering wheel of our lives in control and then we can do anything, i wanted to thank you for motivating me, i got the job, Shaurya says i am happy for you, where did you get job?

Mahek says its one big hotelier KD Shauri, he is opening a new hotel and I got a job of assistant chef, Rajiv and Shaurya get tensed listening to it. Mahek says Kd watched all episodes of India’s supercook and offered me job on basis of that, she thanks Shaurya for motivating her. Rajiv says you can’t do this job Mahek, he asks Shaurya to say something, Shaurya doesnt, Rajiv says they are our rivals. Mehek 2nd May 2019 Thursday Update

Mahek says i will say no this job if you people dont want me. Shaurya says you will nto deny this job because one it is unethical and secondly that we may have rivalry with KD group but we cant be selfish to ask people to not do jobs there, Shaurya says to Mahek that congratulations, he extends his hand, Mahek shakes hand with him, darmiyan song plays, they both share eyelock. Mahek sadly looks at him, Shaurya gazes at her and starts leaving, Rajiv leaves too.

Mahek says he asked me to join Kd and i dont understand this eye talk, Nehal says you are stupid, do what you want, she leaves. Kanta comes and asks Mahek to help her in kitchen, Mahek says i have to go somewhere, i have to do something important, she leaves Shaurya is seeing work at his new hotel. He sees patch on wall and asks worker to plaster wall again.

Shaurya scolds worker for putting low quality mirror on wall, he sees Mahek in mirror and smiles, he turns and says Miss Sharma you here? we met sometime back only and you came here again? are you getting attached to me? Mahek says you really want me to work for KD? Shaurya glares her, Shaurya pulls her closer and says you keep asking me what i want but you dont know what i really want, he smiles at her, Mahek is mesmerized, he moves away from her and leaves, Mahek’s heart beats faster.

Its night, Mahek is lying on bed and recalls how Shaurya pulled her closer and said that she doesn’t know what he really wants, she turns and tosses on a bed but is not able to sleep. Mahek groans and sits on a bed, she says why he is running in my mind, I want to sleep. 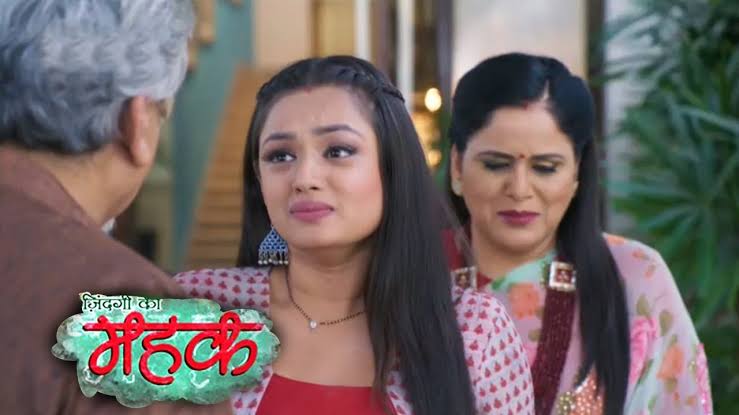