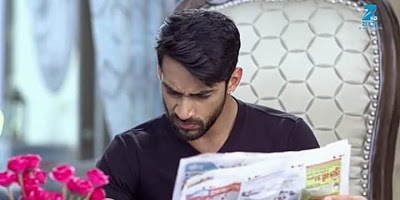 Mehek 5 June 2019 episode starts with Shaurya looking at Mehek and says my mom made me realize, Shaurya says Vicky that gives two cheques to Sharma family, one to Ravi and one to Jeevan.

Kanta says you are a very big man but we don’t need your debts, you have done enough favors on us, I don’t want anyone to think that Mahek and you still have any relation, everything has ended so we don’t need your money. Shaurya says Sharma family’s anger is still bigger than everything else, don’t know when you people will change, he angrily leaves.

Mahek is working in a food truck, Mansi is helping her in cooking. There are many customers at their truck. Karona comes there, Jeevan asks how she is? she says I am fine, he looks at Kanta but Kanta ignores her.

Mansi says to Mahek that your oil such good aroma, Mahek promotes oil she is using. Sonal comes there in the kitchen and says Karona wants to meet you, Mahek leaves. Sonal takes over Mahek’s cooking and praises oil. Mahek comes to Karona and touches her feet calling her maa, Karona blesses her. Jeevan says you have come for the first time here so you have to taste something, he offers her dish, she tastes it and says to tell you truth, not one dish in my son’s restaurant is as good as this dish.

Jeevan says its all Mahek’s magic. Karona sees Kanta but Kanta doesnt greet and keep ignoring her. Mohit is setting chairs outside truck but mistakenly throws kerosene bottle, he doesnt see kerosene leaking. Someone is smoking cigarette and throws cigarette near kerosene bottle.

Mahek looks at Shaurya in surprise and recalls how she taunted him last night for breaking shops of poor and how today he rectified his mistake by listening to her, she smiles at him, he asks what? he takes Karona to car. Kerosene bottle catches fire near truck due to cigarette. Mahek is cooking in kitchen. Shaurya sees truck catching fire, he says blo*dy hell, he runs to Mahek and brings her out of truck before she gets stuck in fire. Shaurya throws water on fire.

Mahek gets scared and hugs Shaurya tightly, they share eyelock. Kanta is calling someone and says you know Mahek is very nice girl, just confirm this marriage proposal, she ends call and smiles. Jeevan and Ravi runs to Mahek, Shaurya moves away from Mahek. Shaurya says to Ravi that are you people mad?

You are doing business but have no brains, it would have caught fire if i didnt see it, Ravi says you Shaurya. Shaurya says enough, i dont want your lectures, i could have called police to tell about this fire and they would have taken your truck away, Jeevan says dont try to threaten us, Shaurya says i am not threatening, there is my restaurant near your truck, if you cant work professionally then go away.

Mahek sees Shaurya’s hand burned, she is pained to see his wound. Shaurya glares at her and goes to his restaurant, Mahek looks on. Mahek comes to Mohit, she gives ointment to him and says Shaurya’s hand is burned so give it to him, Mohit says if i take it to him then first Shaurya will blow at me and then Kanta will scold me, he is Shaurya Khanna so he can take care of his wounds.

He leaves, Mahek looks on tensed. Mahek is packing things in truck. She hears Shaurya screaming in pain from his restaurant and says to Sonal that you go home, i will come later, Sonal nods and leaves. Mahek goes to Shaurya’s restaurant.

Shaurya is tending to his wound in room freezer, Mahek comes there and says i heard your voice, are you hurt? Shaurya says from the time i have met you, i keep getting hurt, i will bear this pain. Mahek says i dont know how will you bear pain but you wont be able to apply ice on your burnt hand. She takes ice pack from him and starts tending his wound,

Mahek says you are so rude, i remember you dozing off fire but i also remember how you rudely talked to my Ravi uncle, Shaurya says your uncles are so stubborn, they dont listen to anyone, they dont know how to understand others. Mahek says my brain is not working that i keep coming back to you, Shaurya says who called you? go back. Mahek says i am leaving. Mahek tries to open door of room freezer to leave but its jam.

Shaurya pulls her aside and tries to open door but its locked, he says you are walking problem, did you close it? Mahek says yes i mistakenly closed it when i came in, Shaurya says great now, this door’s handle is broken, it gets jammed, this room’s temperature is -6 Celsius, now keep freezing here for whole night, Mahek gets worried hearing it.

Shaurya says you want me to call chopper that will come down after breaking roof? Mahek says dont say rubbish, i am cold here, Shaurya says its your punishment for getting my hand burned, Shaurya sees Mahek shivering in cold room and says there is one way only, Mahek says what? Shaurya smirks.

Kanta says to Sonal that why did Mahek stay at food truck? she is not even picking call, what was the need to stay there? she tries to call Mahek, Ravi says calm down, Kanta says i am getting horrified these days that what might happen. Shaurya says to Mahek that there is only one way now, Mahek asks what?

Shaurya takes off his jacket and starts coming close to Mahek, he says dont you know how to warm cold baby? Mahek says stay away from me. Shaurya pins her against rack and says i am sorry but i would have to do it even if i dont want, he leans in towards her, Mahek shivers and says move away, i will shout, Shaurya says you will become more cold baby dont scream,

Shaurya leans in close to her and is about to kiss her, Mahek closes her eyes and weeps. Shaurya starts laughing at her and moves away. Servant opens door of freezing room. Mahek runs out of it, Shaurya laughs, he says to Mahek that i had network in my phone and had already called servant.

Mahek turns to look at shaurya, Shaurya is intensely and sadly looking at her.. jiya dhadak dhadhak jaye plays, Mahek leaves. Kanta is hiding behind wall outside the restaurant and has seen everything between Mahek and Shaurya, she looks worried.