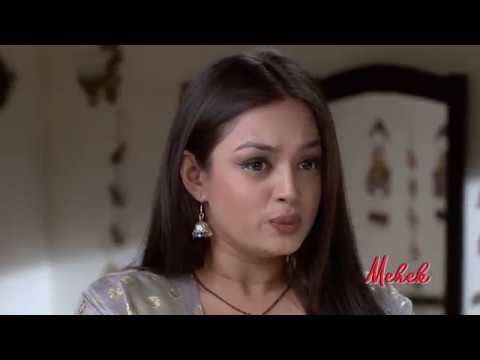 Shaurya shoves her burning dupatta away. A woman says this happens with this kind of person. Shaurya says don’t say a word about my daughter. You should not be called a woman if your thoughts are that way. Don’t say a word about my sister gets out now. Woman says we won’t accept her no matter what you say. Kanta says to Karuna these people don’t understand anything. For God, we are all equal. They leave too. Kanta says to Mahek while leaving don’t worry so much. Mahek says I thought everyone would be happy but see what happened. Kanta says come with me. Kanta says you have to keep your eyes open.

Karuna says to Anjali your hand is burned. Let me bring medicine. Kanta says you know people talk anyway. Karuna dresses her burn. Anjali sys how did they know about me? No one knew about me other than Mahek’s family. Karuna says you are right.

Kanta says to Mahek do something that gives Anjali her right in the society. mahek says you are right.

At night, Mahek is asleep. Shaurya says why are you not sleeping? What happened? Mahek says I am worried. Shaurya says I know. sHe says I don’t know what to do that will make anjali strong on her feet. I have an idea. Anjali calls sooraj and gives her vulgar selfies. Sooraj says I really miss you. She have a plan that needs to be executed.

Mahek says to Shauyra lets go and you will talk. I wont. Anjali comes. Shaurya says sit here. Karuna comes as well. Shaurya gives arti. Anjali says I have something for you. I wanna make you wear these rakhis. Shaurya says you have completed this house. Anjali makes him wear the rakhis. She says always be on my side. Mahek says gives her a gift and says this is from your brother. We will always be by your side. Karuna syas of course. Karuna hugs Shaurya and Anjali but not Mahek.

Shaurya says to Karuna I and Mahek have decided this. KAruna says anjali is lucky to have a brother like you. This is the best decision. Shaurya says this was Mahek’s idea. She wanted me to talk about it. Karuna says talk to Mr. Khurana. I will tell Anjali.
Shaurya says to Mahek Khurana has agreed.

Shaurya says Anjali you will get love and respect you deserve. Khurana’s son lives in UK. i am sure you will like him. she says what.. Karuna says yes he is such a good boy. Shaurya says you should settle in your life. We will celebrate a lot and we will always be there for you. Karuna says you will look so pretty as bride.

Karuna says we have to do some many prepss. Lets make the list. She says we have to get Anjali’s dress. Mahek gives her sweets. Anjali shoves them and goes to her room. Karuna says what happened? She goes after Anjali. Mahek says we should talk to her once. Shaurya says we are talking about settling her down. Mahek says we should talk to her. Karuna says we will talk to her. This is very important for her. Karuna says in heart is Mahek doing all this for jealosuy? Dolly says to Mahek why is Karuna not talking to you properly. Mehek 8th October 2019 Update On Zee World Series

Anjali comes to her room and breaks stuff in anger. Shaurya comes and says what happened. Anjali says I will leave this house. You all want me to leave and that’s why you chose this situation. I will leave anyway don’t worry. Shaurya says listen..

Karuna says meet the guy and if you don’t like him ask him to leave. Shaurya says yes we will do what you want. Karuna says she will meet her. Anjali calls sooraj and says my life will be ruined. He says don’t worry I will make a plan. Mahek comes towards Anjali’s room. She says you look very pretty. Everyone is waiting for you downstairs. Mahek leaves. Mehek 8th October 2019 Update On Zee World Series

Anjali is angry. Mahek comes and says what happened? She says can I go to happy homes? Mahek says its late. She says I will come back and leaves. Shaurya comes downstairs. He asks Mahek what happened? He says we should start planning. Mahek syas we should move slowly.

Shaurya says Nikhil is coming. Mahek says Anjali isn’t happy. There is some problem. we should make her feel comfortable. She went to happy homes. We have to give her chance. Give me one day. Shaurya syas i think we should move ahead with wedding.

Anjali comes to Sooraj. They make out. Suraj says if an old man sees they will die. Anjali says you have to say yes to my plan. I will leave everyone dazed. Just do as I say.

Mahek and Shaurya are asleep. Karuna says Anjali is not in her room. They look everywhere for her. Anjali is with Sooraj. A glass stabs in MAhek’s foot. Shaurya takes it out. Anjali says time for the game. Shaurya and Mahek come downstairs. Anjali hugs Sooraj and says I can’t leave my family for you. I can’t run with you. Shaurya sees them. He is dazed. Mahek turns on lights.

Shaurya hits Sooraj and says how dare you to touch my sister. Anjali says it’s not his mistake we love each other. Shaurya says what.. You just met him twice. Are you crazy? He has fooled you. Shaurya hits him. Mahek says shauyra calm down. Karuna says stop. Shaurya says I will kill him. Mehek 8th October 2019 Update On Zee World Series