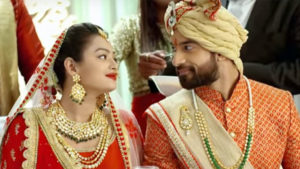 Balwant suddenly feels pain, he clutches his heart and falls down, all rushes to him, Shaurya tries to go to him but Mahek stops him and says go, please leave.. Mahek rushes to Balwant, Shaurya brokenly looks at her and starts leaving, Mahek is dejected seeing him leave. Shaurya comes out of house and sees baord on which he had dedicated street to Mahek’s mother, he folds his hand and says maybe nobody can forgive me but please forgive me, I never cheated Mahek or her family, please forgive me, Maula song plays.  Today’s episode ends ….

Doctor checks Balwant and says his BP had shot but he is fine, he leaves. Balwant asks Mahek when she got to know the truth? Mahek says after two days of marriage, Balwant says why you kept silent? why you didnt tell us truth? you cheated us like Shaurya. Ravi says your love is bigger than your parents? Mahek says nothing like that, Ravi says you did drama in police station to save him?

Mahek says it was no drama, shaurya went to surrender that day and I lied to save him but I didnt want to save him but you people, you dont know what I went through, Balwant says you saved Shaurya? you can say that you did that for us but you are sinner too and shaurya has to get punished which he didnt get earlier, I have lost my son, I will punish him at any cost. Ravi says they kept this case hidden using their money but not anymore, Balwant says lets go, Kanta asks where are they going?

Ravi says to get our justice, we have lost our brother and he needs to get punished, Mahek says I will come with you, Ravi says you wont go there, leave some decisions to us, they leave, Mahek says I am worried that something wrong is going to happen. Jeevan and Ravi comes to Karona, Karona says Shaurya was a kid and I hid his mistake, Jeevan says what was Mahek’s fault? she lost her parents and you used money to save your murderer son?

Balwant says to Rajesh that I will get your punished, Rajesh says we are respected people, talk in low tone, I know my son had an accident and I felt bad too but its done and you cant do anything so lower your tone, Balwant says I will not spare you Khanna.. Rajesh says dont dare talk to me like that, he grabs Balwant’s collar and throws him on floor.

Balwant says I wont spare you, I will see what you can, he asks guard to throw trash out, Ravi says we will clean trash now, we will send your son to jail. Ravi, Jeevan and Balwant are dragged by guards and thrown out of house. Balwant says this Rajesh has taken my son, I wont spare him now.

Ravi, Jeevan and Balwant comes to police. Inspector says this is big case, you are talking about respected Khanna family. Ravi says if you dont reopen case then we will go to media, inspector says even if Shaurya did accident, he cant be punished because he was only 14 years old but if its true that Shaurya’s family gave bribe to close the case then there will be action against them, Balwant says we want case to reopen, you start working on that. Shaurya comes to white chilies. He sees people staring at him. Sonal comes to Mahek and says come see TV.

Inspector comes to arrest Karona. Rajesh says let me talk to commissioner, inspector says talk after coming to police station, Rajesh says I will take your jobs away.

Reporter says that Shaurya’s mother Karona Khanna has got arrested, it is also known now that Shaurya Khanna killed Meera Sharma and Sulesh Sharma in an accident and now is married to their daughter Mahek Sharma. Shaurya sees this news in his restaurant and is stunned. Sharma family sees news too. Mehek July 2nd 2019 Update on Zee World Series

Reporter says that Shaurya’s mother Karona Khanna has got arrested, it is also known now that Shaurya Khanna killed Meera Sharma and Sulesh Sharma in an accident and now is married to their daughter Mahek Sharma. Shaurya sees this news in his restaurant and is stunned. Sharma family sees news too. Shaurya sees people gathering around Karona and trying to hurt her while police is catching her.

Karona sits in police jeep, people chant against her. Karona is brought to police station, media mobs her and asks her questions, Karona hyperventilates. Reporter says they used money to save their son. Sonal sees this on TV and says Balwant took wrong step in anger, Mansi says Kanta and Mahek has gone, everything will be fine.

Shaurya is driving to police station. Mahek and Kanta is in rickshaw, they passesby each other. Rajesh comes in police station, he says to Balwant that I wont spare you. He asks Karona to not worry, he says to inspector that I will talk to commissioner. He goes. Jeevan asks inspector why you didnt arrest Shaurya? he did accident? inspector says car was in Karona’s name so she will be arrested. Balwant says to Jeevan that we will follow laws only, I have lost my son so I will take action.

Shaurya comes to police station, he shouts on media that it was an accident, dont talk wrong about my mother, reporter says you cant stop our freedom of speech, you have to answer us. shaurya pushes them away. Shaurya comes in station, Jeevan sees him. Jeevan says to Balwant that media has started covering, its so messy, so much happened with Karona, it was not her mistake, Ravi says if we should consult lawyer?

Shaurya and Rajesh meets commissioner, Shaurya asks him to find some solution, commissioner says if Sharma family takes case back then problem will be solved, Shaurya sees Balwant and Jeevan sitting outside, he leaves.

Jeevan says to Balwant that Karona did what every mother would do to save her son, Balwan says I am doing what a father should to killers of his son. Shaurya comes there and says no, he folds his hands infront of Balwant, Balwant looks away.

Mahek comes to police station, reporters gather around her, they ask if she will punish Shaurya? they ask if she has his property? they dont Mahek go inside. Vicky comes there, he protects Mahek and Kanta and takes them inside.

Shaurya says to Balwant that I should get punished, I am ready to go to jail for life but dont do this with my mother, I will do anything. Mahek and Kanta comes there. Balwant asks Shaurya if he can bring his son and daughter in law back? i am feeling same pain as you feel pain for my mother, I will get satisfied once your family is punished. Shaurya sees Mahek and pleads her to make Balwant understand, Balwant says she will say same thing, they were her parents.

Mahek tries to talk but lawyer comes there, he says I am Munawar from CID, Shaurya Khanna you cant force Mahek’s family, if you are seen near them then your case will be more weak, policeman takes Shaurya away. Mahek asks Balwant to not let Karona get arrested, Balwant says this wouldnt have happened if she didnt save her son that time, Mahek says what will you get by hurting our own?

Balwant says I will get peace, Shaurya will feel pain seeing his mother in pain and it will give me peace, this is punishment for all mothers who spoil their children, why did she give keys of car to Shaurya when he was not adult? its her mistake, Kanta says this is not solution, revenge is not good, Mahek says Balwant dada you can say anything but I cant let this happen with Karona Maa, I will bring her out of jail for sure, Balwant is stunned.

Shaurya meets lawyer, lawyer says Karona cant be bailed till three days as next two days will be weekend, Shaurya fumes in anger. Mahek comes to Shaurya’s house, Shaurya is drinking wine, Shaurya asks Mahek why did you come now? any more punishment you want to give me? Shaurya says my mother stood by you at every moment and your family sent my mother to jail for revenge? Mahek says you are thinking wrong, Shaurya says you and Maa are everything for me, make your parents understand, because of them my mother will live in jail for three days and if anything happens to her…

Karona is in lockup, policewoman asks her to start living in this cell, your time in palace is over. One cell mate asks her if she is same woman whose son killed poor people? who much money did you give to close case? Karona says 75lacs, woman says now I will show you how to crush people, she starts beating Karona and strangling her. She badly beats her.

Mahek says to Shaurya that I wont let anything bad happen to Karona, I will request my family to take case back and if they dont then I will go to police station on Monday and take case back but I wont let anything happen to Maa, Shaurya emotionally gazes at her, he is about to hug her, but he gets call from someone, man asks Shaurya to come to city hospital, Shaurya gets worried and leaves with Mahek behind him.

Shaurya and Mahek come to the hospital and sees Karona injured, Shaurya asks what happened? jailer says criminals beat her, Mahek tries to touch Karona but Shaurya jerks her hand away and shouts don’t dare touch my mother, if anything happens to my mother then your whole family will pay. Mahek breakdowns and cries.

Karona is taken to the operation theater. Shaurya’s family comes there. Grandma asks, if Karona is fine? Dolly says your wife destroyed your family. Nurse says to the doctor that the patient is getting more critical. Svetlana says to Shaurya that your mother is in hospital and people are chanting against and this all happened because of your so called love, will you do anything or keep chanting Mahek’s name? Shaurya says if you can’t keep your mouth closed then leave, I don’t need anyone’s suggestion right now, I just want to think about my mother now, Svetlana huffs. Mahek, Kanta and Jeevan come there. The doctor comes to Shaurya and says the patient is very critical so we are putting her on a ventilator. More Update Coming Later…