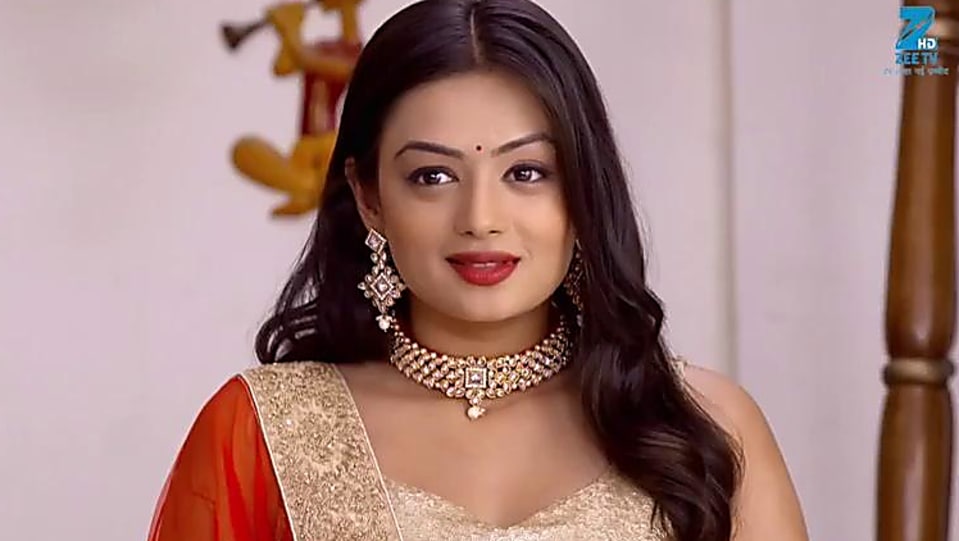 Mahek says why you said yes to pami. He says your in laws and husband to be came here and asked me for it. Mahek says can you say no to them? He says I have other things to do. Do it yourself. Mahek leaves.

Mehek May 1st 2019 Update Wednesday
The mehdni starts. Pami arrives and says wow the arrangement is so good. Mahek comes out of her car. Shaurreya sees her from the balcony. Mahek sees him too. Pami say she looks so good. Shaureya is still in the balcony. The mehndi starts. Pami and all the women dance.

Mahek is having mehndi put on her hands. Shaureya comes downstairs. By mistake the girl writes shaureya’s name on her hand. Mahek says oh God no. She runs towards the garden and washes her hands with a garden pipe. Shaureya says what tragedy happened to you now? Mahek says nothing I will manage. She turns the pipe to his side. He says you ruined my suit. He pours the water on her. Mehek May 1st 2019 Update

Mahek falls on shaureya. She tries to get up but slips again. Pami sees them like this.

Mahek slips and falls on Shaurya, Shaurya looses balance and they both fall in mud. Pammi sees Shaurya and Mahek lying on mud. She says to Mahek that seems like you both slipped, Mahek be careful, come with me. Mahek gets uo from Shaurya and goes with Pammi.

Shaurya is standing in his room and says Mahek is like storn, he sees Nehal talking with someone, he is not able to see that its Ajay. Nehal says to Ajay that i was fool to try to kill myself for you but now dont you dare come near me, dont touch me. Shaurya comes out of his room and sees its Ajay whom Nehal had affair with, he says oh God, Nehal tried suicide because of Ajay?

Mahek is wearing Shaurya’s blazer. She is cooking something in kitchen at night. She looks at mehndi filled hand and recalls ajay dancing with
her and how she and Shaurya fell in mud. Shaurya calls her and says i want to meet you, i am coming to your house in 20minutes, Mahek says but.. he cuts call. Shaurya sees Ajay drunk in his living room and takes him to room.
Mahek is waiting for Shaurya on terrace, she says he said he will come in 20minutes, why did he not come till now? what work he has with me? he is not picking my call too.

Shaurya comes there, its dark out there. Shaurya says i want to ask one question, tomorrow is your sangeet and wedding after two days, why you are doing this marriage? Mahek says because my family wants me to, Shaurya and says you? Mahek looks away from him and says me too. Shaurya says look in my eyes and say this, Mahek says you came here for this joke?

She turns away from him but Shaurya holds her hand and pulls her impossbily closer, Mahek sasy leave me, Shaurya says look in my eyes and say you love Ajay, Mahek says leave me, anyone will see us, Shaurya grabs her tightly and says look in my eyes and say.. Mahek looks in his eyes and says yes, i love Ajay, they both keep looking in each others eyes, Ae dil hail mushkil song plays, they are close and sharing eyelock, Mahek helplessly looks at him.

Shaurya says next time give this answer wearing glasses so i wont be able to see your eyes, Mahek looks down, Shaurya moves away from her and leaves. Mahek is tensed and worried. Mehek May 1st 2019 Update

Its morning, Pammi asks her husband to get ready for sangeet. he says you are getting ready like its your wedding. Ajay comes there ready, he is wearing sunglasses, she asks him to take it off, he says i drank a bit last night so my eyes are puffy, father says we have given birth to drunkard, Pammi asks him to shut up. Mehek May 1st 2019 UpdateMehek May 1st 2019 Update

All are in sangeet venue. Mahek is brought there and sits on stage. Ajay’s family comes there. PD says to Ajay that your black glasses wont work, our Mahek’s charm will make you see stars. Pammi says people will make fun of your glasses. Ajay says i wanted to enjoy with my friends last night, its my wedding after all. Ajay comes and sits beside Mahek on stage. Singers start sangeet ceremony. Sheetal and Sonal dances. Jeevan and Ravi starts dancing too, all are dancing but Mahek is not happy. Kanta and Mansi dances too.

Sonal, Mohit and Nehal dances too. Pammi dances with her husband. Mansi brings jay and Mahek, all start dancing arougn them. Shaurya and Karona enters venue. Ajay is dancing around Mahek but she uncomfortable. Shaurya comes infront of Mahek, they share eyelock. Mahek becomes conscious and moves away. Ajay says my brother has come, he hugs Shaurya. Shaurya comes to Mohit and takes him aside, he tells something to Mohit.

Mahek is looking at them from far. Mohit looks at Mahek tensely while Shaurya is telling him something. Mohit leaves with Shaurya. lights of venue are turned down. Shaurya says i have turned it off, i want to show you something to you people but before i want to tell you something. He says to Ajay that you are great. Ajay says i love you too bro.

Shaurya says you solved my problem, what i couldnt do, you did it, i tried to make Mahek understand but she didnt listen to me but maybe after seeing this, Mahek and her family will open their eyes. Video plays, Ajay is drinking wine and says to Shaurya that thank you, i was getting tired with these wedding rituals, he is already drunk and says i will drink so much wine that i will become pig, as you know from tomorrow i will be pig for life. Shaurya says its just marriage, Ajay says have you seen face of girl i am marrying? Shaurya says if you dont like her then why marrying her? Mehek May 1st 2019 Update on Zee World

Ajay says Mahek is bl**dy boring. Mahek flinches hearing it. Ajay says in video you know why i am marrying? i am marrying Mahek for money, she has 25lacs and its not less, once i will get her money, i will do business with you, i butter you to get you as business partner, I will give her divorce after two years of marriage then that fatso Mahek can go to Sharma stable to her mental family. Mehek May 1st 2019 Update on Zee World

Shaurya says very smart, Ajay says its super smart, i am real dude, you dont know how talented i am, when Mahek entered contest, i kept eyes on her, i sacrificed a lot for this wedding, i had affair with another girl but i dumped her for this marriage, she was hot and s*xy, she was english and love was english too, you know her name? i fooled everyone, Mahek is gone, video ends. All angrily looks at Ajay.

Get The Latest Update Here