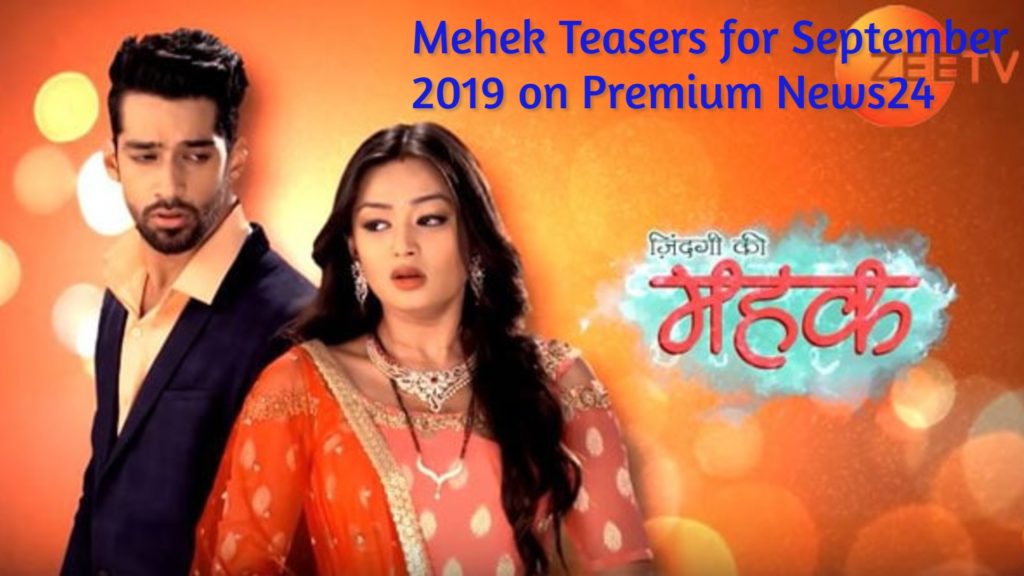 Mehek regains her memories and Archie is defeated. However there’s a fake Shaurya in the Khanna house, what exactly is his mission?

Sunday 1 September 2019 – Archie and her dad conspires to kill Neev through an accident but he is saved in time. However Archie’s dad takes the fall for the attempted murder. Archie is not yet finished in her quest to prevent Shaurya from finding the truth about vandana. He sets the lab on fire trapping both Mehek and Neev, will Shaurya be able to save them on-time?

Monday 2 September 2019 – Mehek is having strong flashback from her past. She tells Kanta about this, however she does not believe Kanta’s proof as she still feels motherhood for neev. Kanta says you love everyone. Mahek says no I believe Neev is my son. On the other hand, Shaurya is convinced that vandana is his Mehek and so he ‘kidnaps’ her to a contest.

Tuesday 3 September 2019 – Shaurya makes Mehek participate in cooking contest. He uses the opportunity to get close to her. Mehek is still having flashes from her past life and cooking contest. Mandhar gets out of prison. Archie sabotage Mehek’s competition and puts her life in danger again. Mehek is beginning to develop feelings for Shaurya.

Wednesday 4 September 2019 – Mandhar comes to the competition dressed as Santa Claus. He plans to hit Shaurya on the head and leave with Mehek. On the other hand, Archie has injured Karona wanting to use her as a bait to lure Shaurya back to her.

Thursday 5 September 2019 – Shaurya leaves the competition to attend to his mother and Mandhar uses the opportunity to perfect his plan of abducting Mehek but Shaurya is one step ahead as he sends Kanta to assist her. People recognize Mehek as the winner of a previous cooking contest but Mehek is not disturbed. Mandhar attacks Kanta and tries to kidnap Mehek but she insists on finishing the competition, what will Mandhar do?

Friday 6 September 2019 – Mehek is able to over power Mandhar and locks him in the room. She goes to complete the cooking contest and there she is declared the winner. True to her words, Mehek returns to Mandhar and prepares to go back with him. However Archie has a life threatening plan in store for her.

Saturday 7 September 2019 – Shaurya organises a party to celebrate victory if White chillies in the competition. He also has a secret agenda to jug Mehek’s memory by enacting scenes from her previous life. However Archie’s putting her plans in place to abduct and kill Mehek.

Sunday 8 September 2019 – Shaurya is disappointed when all his plans fail to jolt Mehek memories, and that Vandana has left him for good to go be with Neev and Mandhar. He looses control and starts destroying everything, and burns memories of her. Unknown to him Vandana is watching all these unfold and it’s what finally jolts her memory and Mehek knows she is Mehek and not vandana. Will it be too late for her?

Monday 9 September 2019 – Now in Mandhar custody and with a revelation of who she is, Mehek is in grave danger Mandhar takes Mahek to a store room. He ties her hands. He says now see what I do. Mahek says Shaurya wont leave you. Let me go he will kill you. Mandhar says I will kill you and then Neev. Mahek shoves him. She tries to run from there. Mandhar takes out his knife. Julie says please stop it. He is about to stab Mahek.. Bhanwari comes in between. Mandhar stabs him. Julie screams.

Tuesday 10 September 2019 – Shaurya comes to save Mehek but she denies him again and insists she is Mehek. However this is a ploy to save Neev from Mandhar. Mahek says to Julie I am sorry I couldn’t save dad. You have to help me in saving Neev. Julie nods. On the other hand Shaurya faints from the shock and Archie uses the opportunity to get closer to him.

Wednesday 11 September 2019 – Mehek appears at the Khanna house to demand 1 million from Shaurya for the trouble he caused her and her family. Shaurya is angry and finally believes that this is not his Mehek. In anger he gives her the money and declares to marry Archie and she is the one who truly loves him. However Kanta is able to decipher through Mehek’s words that this is their Mehek and that she needs their help.

Thursday 12 September 2019 – Mehek leaves with Mandhar to go find Neev. Kanta and Jeevan follow behind, convinced that Mehek needs their help. Meanwhile Shaurya prepares for his wedding to Archie.

Friday 13 September 2019 – Kanta, Jeevan and Mehek are in trouble from Mandhar. While Shaurya is about to tie the knot with Archie Mehek finds a way to call him and then reveals that she is his Mehek but is in danger. Shaurya runs from the wedding to go reduce Mehek, will he get there on time?

Saturday 14 September 2019 – Shaurya saves the day. He is reunited with Mehek, the sharma family is happy again. Mehek tells them about Archie and her true colour, they all decide to play a game in her in other to expose her before the world.

Sunday 15 September 2019 – Shaurya continues his marriage with Archie. He takes her home as his wife but strange things begin to happen and Archie is scared.

Monday 16 September 2019 – Archie gets to know their truth and tries to beat them at their own game. However things are not in her favor as she is defeated and killed. Meanwhile, Nehal is revealed to be pregnant, who could be responsible?

Tuesday 17 September 2019 – While celebrating a birthday party, terrorist attack the Khanna household and Shaurya is shot and kidnapped. A pretender in disguise as Shaurya enters the house with a hidden objective. Will the family detect this in time before it becomes too Kate for them?

Wednesday 18 September 2019 – Shaurya is kidnapped and tied in a cage, he thinks why I am kidnapped? Flashback shows when Shaurya was fighting with terrorists in mall, they hit him and kidnapped him and then another terrorist wore his mask and became Shaurya.Shaurya thinks they did this because me and Mahek failed their plan? or is it some other reason? they need money? or some old revenge?

Thursday 19 September 2019 – A series of events in the Khanna house threatens to expose Arman the terrorist for who he is. First Mehek sees Shaurya in Arabic dress. Mehek also applies haldi on Shaurya’s face, It goes in his eyes and his lens falls, can Mehek tell the difference?

Friday 20 September 2019 – Neev has found out that an imposter is in the Khanna house, this puts his life in great danger. Neev is lying on bed and hears his plan, he thinks I have to tell this to Mehek Ma otherwise this villain kill everyone. Arman discovers that Neev is aware if his plan and he slits his throat to prevent him from talking. Will Neev make it?

Saturday 21 September 2019 – Meanwhile, Shaurya overhears Armaan’s plan to use his restaurant to plant a bomb, Shaurya says to Armaan that you are killers, you are going to kill innocents. Armaan says God is with us, Shaurya says God is not with you, If God was with you then you would have been ruling the world, he grabs Armaan’s collar through the cage, he decided to find every possible means to get out of the cage and inform Mehek of what is going on. Will he be there on time?

Sunday 22 September 2019 – Mehek is able to detect that something is amidst. She follows Nalini, who is an agent of the terrorist. She practices as a suicide bomber. Nalini brings out USB she hid in the cabinet. Mahek comes behind Nalini and asks who are you and what’s your connection with that bomb blast? Nalini overpowers them and she and Nehal are in trouble.

Monday 23 September 2019 – A tragedy occurs in the Sharma house as PD is killed after she discovers that Arman is a fraudster, how will the family bear this loss? PD has passed away. Mehek and family do her funeral.

Tuesday 24 September 2019 – Mehek begins to suspect that Shaurya has changed when he gives an excuse for not been in PD’s funeral. Later Mahek finds out about fishy things Shaurya has been doing. The real Shaurya is informed about the death of PD. He is shocked.

Wednesday 25 September 2019 – Mahek pretends to be asleep. Shaurya goes out with his alarm. Mahek sees him going upstairs. Arman wears his clothes and prays Namaz. She is in shock. She tells Kanta and Nehal that she saw Shaurya praying namaz.

Thursday 26 September 2019 – One of the terrorist Nalini says to Arman I want to get out of this mission. I can’t ruin my kid’s life. If I stay in this mission he won’t ever come to this world. Arman says police is after you as well. You are a danger to us. I will set you and your kid-free. He takes out a knife. Nalini gives him an injection. She runs out. Nalini calls Mahek to meet her in a location to tell her everything, will Mahek get to Nalini on time…

Friday 27 September 2019 – Arman kills Nalini before Mehek could get there, Mehek follows Arman’s to his place and peeks inside, She sees both Arman and Shaurya, Arman taking off his mask and real Shaurya detained. Can she be able to save Shaurya like before in the presence of such deadly people?

Saturday 28 September 2019 – Episode 46 – The Gabela online business deals with yet another blow when a devastating fire destroys all their material. It’s a fight to the death as Mehek and Shaurya execute their escape plan. Will they get away unharmed?

Sunday 29 September 2019 – Episode 47 – Could Amit be falling for Norah for real now? Aunt Dolly is suspicious about Mehek and Shaurya’s guests. Abbajaan and Armaan are determined to make their plan a success.

Monday 30 September 2019 – Episode 48 – Karan is working on getting Sanjana to confirm she had a hand in the factory burning down. Shaurya and Mehek set out to free everyone from Abbajaan and Armaan’s terrorist attack. Will they be successful?