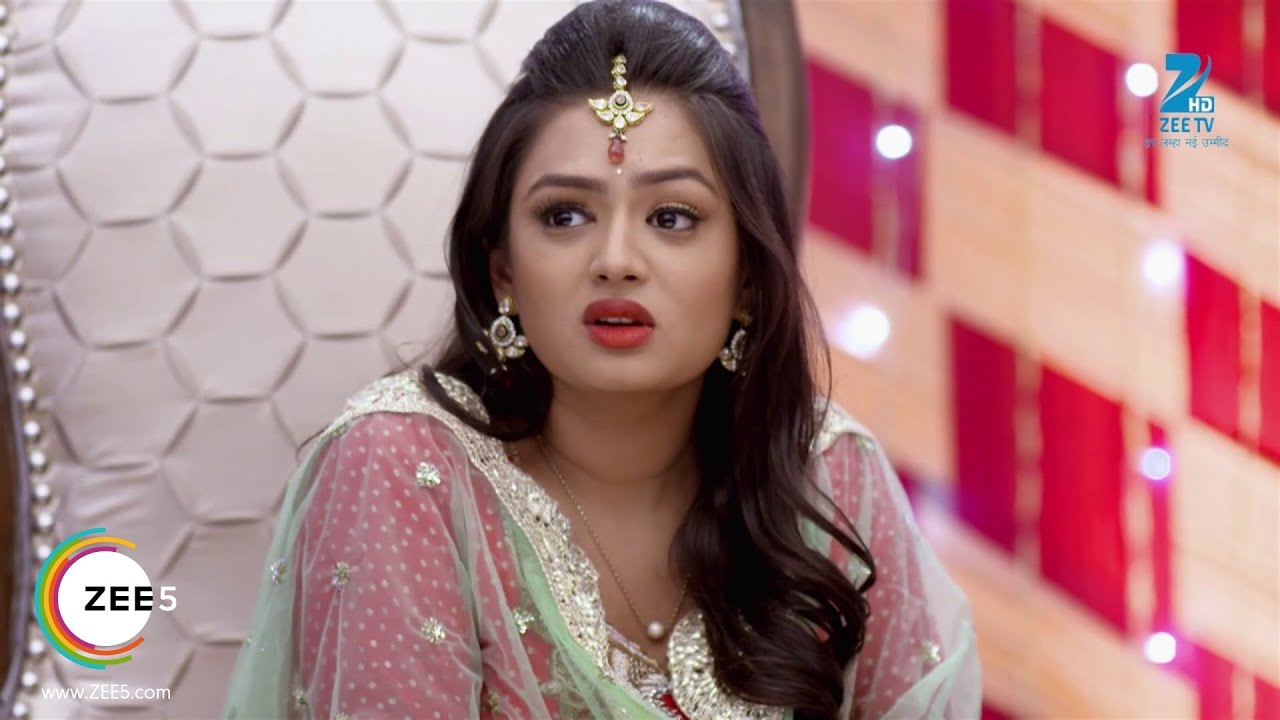 The episode starts with Jeevan telling Kanta “do you think that women empowerment are useful in real life? so you think that anything can make Shaurya Khanna respect Mahek? you didnt even inform me, but you gathered some NGO women and went there like it will make things right” Kanta replies “what would I have done?

Mahek wanted me to do it so i did, this is what she wanted, Jeevan says “you listened to her, didnt even think that this is not the solution and she might suffer with that man”, Kanta says “sometimes we should listen to our younger ones advice too, there is no harm in trying”. Ravi tells Mansi that did men of this house die that you all women went to become politicians? why are we imposing our daughter on that man? is there any respect remaining for us?

In the morning, Mahek gets ready. She comes to bedside and sees Shaurya sleeping, she sees sunlight casting on his face, she stands between him and sunlight, she takes alarm and rings it in Shaurya’s ears, he wakes up with a jerk, and says Mahek let me sleep, he throws pillow on her, Mahek says we will play pillow fight at night so we will get good sleep.. she winks at him, he stares her. Mahek says its time for us to leave, Shaurya says i am not going anywhere with you.

Mehek Update 24 May 2019 – Zee World Series
Mahek shows him list and says as per demand number 4, you have to celebrate all rituals which i celebrate even if you frown, Shaurya says there is no festival today. Mahek tells Shaurya that today is my pag phera ritual(ritual in which bride and groom to go bride’s house first time after wedding) and you are coming with me to my house. Shaurya says i am not going anywhere with you.

Mahek says i have women NGO’s number, you have 10minutes to get ready, she leaves, Shaurya glares at her angrily. Jeevan says I don’t consider him son in law of this house. Kanta says its okay if you don’t but mahek is our daughter, For her we have to do this. Because mahek considers him her husband. We have to do this. Karona is supporting mahek.
There is something right she is doing. We are her family, we can’t leave her alone. she will need our support. Nothing can harm her if we stand by her. Whoever tries to harm her has to pay back. 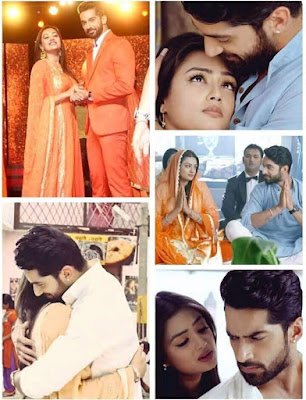 Mahek and Shaureya reach. Nehal opens the door. Kanta does their arti. She is about to put tilak on Shaureya. He says I am allergic to it. Mahek says apply on my face twice. One for me and one for my husband. Kanta says come in. Shaureya touches Pd’s feet. She says you ran from wedding now we have you here. You have a good wife though. She will keep you happy all your life. Everyone smirks. Shaureya touches feet of jeevan. Here Is Our Facebook Page

Kanta says it please. Kanta asks Nehal and Jungu to bring food. Mahek stands up. Jevan says no you sit. Kanta gives shaureya sweets. he says I am not eating sweets these days. Mahek says take a bite and run 1KM extra. Ravi says wife has started telling you to run kilometeres too now. Everyone giggles. Shaureya says wife? Of a half done wedding? Mahek says chachi did you notice all men complain and we women enjoy. Shaureya says we can see that. Kanta says we have to do the rituals. Mohit bring the stuff.

Mehek Update 24 May 2019 – Zee World Series
Nehal says to Shaureya please eat this halwa. He says I am not eating sweet these days. Kanta gives them gifts. Mahek says why you did all this? Kanta says this is ritual. Kanta says Shaureya this shirt is for you. Shaureya says I can’t take it from you. Mahek says shaureya she is giving you with love. Take it. Shaureya says I had to come here so I did. You can’t force me into things. Mahek says don’t be so mechanical. You came here don’t say no to gifts. Chachi brought this with love. Shaureya says your ears don’t work here? I said I won’t take it.

Mohit says di he doesn’t understand love. Shaureya says even frogs have started speaking now. You are 22, when I was your age I was successful business. I don’t talk to useless boys. Mahek says enough. Shaureya says what did I say wrong? Is he worth talking to me? Why are you doing this drama? We can be truthful to each other. Stop this non sense.

This is all drama Leave it for the world. Shaureya says you people got what you wanted. I think we are alike. I know I am a liar and cunning. I can do anything for my reason. So you people are like me to. I married mahek for her recipes, then left the marriage. You wanted mahek in my house permanently.

Mehek Update 24 May 2019 – Zee World Series
So you people did anything to get her there. You were successful to get her in my house. What you think? I am a fool? I know your intentions. When we are alike then why are you doing this drama? We can be truthful to each other. I can’t say anything else. Otherwise my wife would say that I insulted my in laws. So I am leaving.

Karona says I hope shaureya doesn’t misbehave there. Svetlana says didi I feel like he is a child again. He brings so many complains. Karona says he used to pull your hair in childhood and now your leg. Shaureya comes and goes to his room. She asks mahek are you okay? Svetlana says why are you worried about them? You know he likes toys. when he is done with this girl he will throw her out. Karona says she is not a toy she is my blessing. Svetlana says don’t call her a blessing at least.

PD says even I fear that we are doing a mistake now. Ravi he misbehaved with us in our house. He stayed here in this house to back stab us.

Mahek says to Shaureya you hate me but don’t insult my family. Don’t you know how to talk to elders? She says how dare you talk to my family like this? He says thats how I talk. Your family was doing their middle class rituals. You got all the things you wanted. Big house big car. Then why are you and they doing this drama? She says you only see your money being respected.

So you can not imagine someone doing things for you alone. You think money is everything and it has blinded you. Mahek tells Shaurya that money has blinded your ego, you cant see anything straight. Shaurya says now you will teach me? i agree that i am liar, cheater but on their faces but your house is like is drama house, like your Kanta chachi was doing drama by giving me cheap shirt, you people should start teaching how to trap rich guys.

Mehek Update 24 May 2019 – Zee World Series
Shaurya says that i did drama of loving you to get your recipes but i was ready to give you 50lacs but you want to grab this 500crores property, you see love in my eyes but how? because its not there, all i have seen in your eyes is greed, for luxury and riches, you are shrewd, Svetlana, Shurti are more better than you as they atleast hate me from front, their eyes are on my property but you wanted my surname, someday you will seduce me and will get pregnant with my child, thats why you share room with me, thats why you sleep in my bed, once you become pregnant then your child will be heir of this property, Mahek says enough.

Shauray says cant handle truth? you know my father cheated my mother and started affair with rich woman and trapped her to get money but you are ahead of him as you are blackmailing me to stay here, you didnt even try to trap me in your love trap as you i got trapped myself, so Mahek Sharma enjoy living freely in my five star hotel type house, enjoy free food, free jacuzi, free pool, everything as thats what you want, he leans in and kisses her cheek, he says enjoy honey, he smirks at her and leaves, Mahek cries being so hurt.

Shaurya is sitting in room and sees Kumkum show on Tv, he sees couple romancing on tv and turns it off. Shaurya comes on balcony and sees Mahek sitting in garden. Mahek silently sits in garden, bheji thi dua plays. Shaurya is standing on balcony looking at Mahek. Karona comes to Mahek and covers Mahek with shawl, Mahek says i know you can see mistakes of your son and pain of mine but dont request me to go inside, i want to stay alone for now.

Karona says you didnt eat anything since morning, should i bring something for you? Mahek says no my hunger and thrist was snatched by Shaurya. Shaurya looks at them and says if my mother was not trapped in Mahek’s trap then i would have thrown her out way earlier. Karona calls Kanta and says Mahek is silent from the time she has comeback from your house, did something happen there? Kanta says what should i tell you, she recalls how Shaurya insulted them, she tells this to Karona. More Updates On Mehek Here