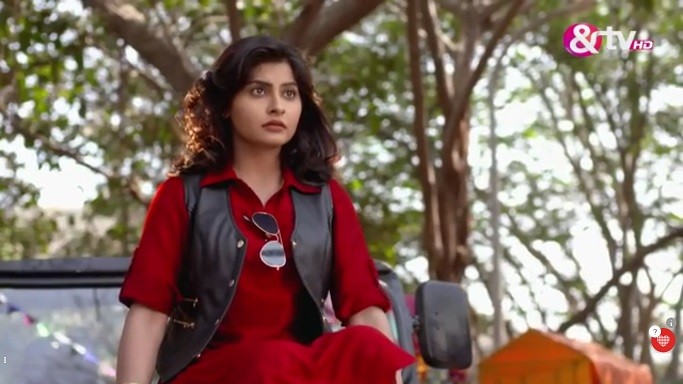 Dulari pleads Revathi not to send her out of house. Revathi says she cannot, what was the need for stealing. Dulari says she stole it for her, thinking she can trap Shristi, but herself got trapped. Revathi asks why did not she tell before, she would have done something, now she will go and convince Vidhvan and Dulari should apologize. Vishu looks at Shristi’s gift. Shristi enters. He says she gave him best gift.

She says his good time should start now. He says she made this 1000rs worth watch worth lakhs and precious.Diwali celebrations start. Shristi and Ragini draw rangoli. Ragini says misterji/Anurag sometimes questions her so much that she gets speechless. Shristi asks her to let things go in their own flow. Brij and Vidhvan decorate house. Revathi counts sweet boxes. Dulari sprays room freshener around.

Their Jokergiri starts. Ragini gets ready for diwali celebrations. She tries to tie her back lace, but unable to, thinks when will Divya or Shristi come and tie lace. Anruag comes and stands behind. She nervously says Shristi or Divya will tie, he cannot. He says he can and ties lace. He gets romantic, she gets shy. A romantic song plays in the background. Revathi enters and gets jealous, asks them to come down as Vidhvan is calling them for pooja.

Shristi and /Vishu also get ready. Shristi says Vishu is looking handsome today. Vishu says he is looking good today, but she looks good every day. They both click selfie. Vishu says he fix her makeup and jewelry and does. Kyun aata hai seene me…song…plays in the background. The both get romantic. Revathi enters with Dulari and fumes seeing that, yells if Shristi is ready she should come down to light lamp, then cook.

Whole family lights lamps. Anurag helps Ragini. Parag enters with gifts. Vishu greets him and asks what did he bring for him. Parag says sweets, fruits, etc. He greets everyone. Anurag asks who is he. Ragini says her brother and reminds London ticket. Anurag hugs him and wishes happy diwali. Sumer also comes to meet Shristi with gifts. Vishu greets him in. Parag walks to Diya and their romantic nok jhok starts. Shristi is in kitchen. Dulari informs that her brother Sumer has come. Shristi walks out. Dulari switches on gas thinking of taking revenge from Shristi and sprays room freshener around.

Sumer apologizes Shristi and requests her to talk to their father once. She says she is busy. Dulari thinks both sister and brother will die. Shristi tries to light matchstick, but it does not. Dulari leaks gas in kitchen and waits for Shristi to switch on light and burst kitchen. Sumer smells gas on time and switches off stove knobs and takes Shristi out of kitchen.

Ring Of Fire Sunday 31st January 2021 Dulari escapes. Shristi says it was very dangerous, she did not switch on gas at all. Sumer request s her to call papa. She calls from her number and says it is her. Purshotam says he remembers her number, but thinks she forgot his number. She says no. They bond well.

Ragini, Anurag, Vishu, Shristi, Divya, Sumer play cards. Shristi cheats. Sumer catches her and says she always cheats since childhood. Shristi asks not to reveal her secret in front of everyone. Vishu asks is it. Shristi says he always used to lose. Sumer says because he wanted her to win. Anruag says he unfortunately cannot remember his childhood. Shristi says he used to love sweets a lot and gives him Laddoo. Anurag tastes laddoo and says taste is identifiable. Sumer says his mother used to prepare sweets for Anurag.

Anruag asks how. Shristi says her father is Anurag’s family’s lawyer. Anurag asks what else he likes. Vishu says he likes crackers and is expert. Ragini says she is more expert and nobody can compete her in firing. Anurag asks what… She says cracker gun and challenges him for a competition. Sumer says he will go now as maa asked to return before pooja.