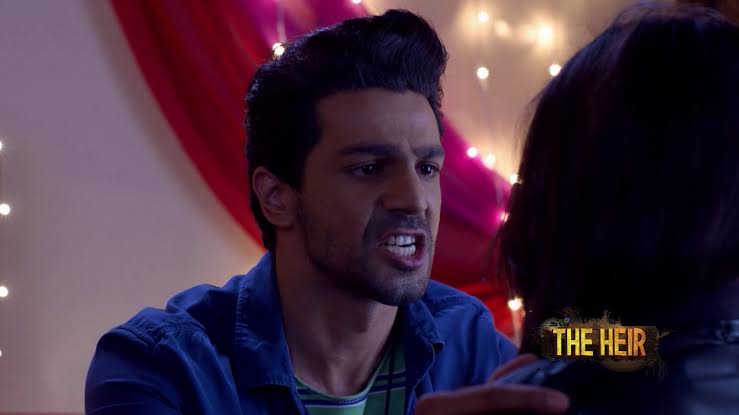 Sakshi ask Mannu to throw her mangalsutra now, her drama is over. Sakshi goes to take mangalsutra. Amrit stops her. Raj gives sweets to Amrit. Amrit goes. Raj says this is the truth, Sakshi and I will marry in two days, with all rituals and blessings, then I will kick you out of here. Mannu cries.

Harjeet smiles and fees proud of Raj. Sukhi comes home and says Jagan gets strange, he is checking godown since morning. Amba hears this and thinks to go there to save Simran. She goes and sees Jagan. The man says we got her, she is inside. Jagan says then get her. Amba worries and says Simran…. Jagan asks since when is this going on, come I will make you meet your mum.

Amba sees a little girl. He asks is she playing along with someone else. He gets godown shut. Amba wonders where is Simran. Rohan takes Simran. She pushes him and runs. He gets hurt. She gets water for him and cleans his wound. She says I also got hurt once, mummy has put soil on it, I got fine, you will also get fine, promise me you won’t play that game to tie me up. He looks at her.

Mannu packs her bags. She recalls her marriage with Raj. Mohini says its good if Preet goes, everything will get fine here. Amrit sees Mannu. Simran breaks wine bottle. Rohan asks what did you do. She cries. He goes. She walks after him. He asks why are you coming after me. Some men sit drinking. Simran goes there and asks for bottle. They stare at her. Rohan sees her gone and looks for her.

Rohan sees Simran and says where did she get stuck, mad. The men ask Simran to dance. Simran says fine, I will dance. She dances like a kid and sings the rhyme. Rohan asks is she mad, what is she doing, she is dancing instead running away. She says I got tired and sits. She asks them to give bottle. The man holds her. She takes bottle and runs. The men run after her. She bites the man’s hand and hides. The men leave. Rohan asks Simran is she mad, why did she go there. Simran says I got bottle for you, even then you are scolding me. He gets shocked when she gives wine bottle to him.

Amrit asks Sakshi why is she doing this with Preet, you love Raj, but he is married now. Sakshi asks her not to say anything now, you forgot the promises made to me, Preet did cheap tricks but could not melt Raj, he hates her, Raj called pandit here, Raj was never Mannu’s husband. She says I know this pain well, don’t do this. Mannu asks her not to beg to anyone, always have your self esteem, let this happen. Amrit cries. Mannu takes her blessings. Raj sees her going. Raj stops her. He says stay back till my marriage and then go.

Raj ask Mannu to see his marriage with Sakshi and believe it. He asks her to see all rituals and go. Mannu cries. He goes. Mannu leaves. She comes to the shade. She thinks of Raj and cries. Ek mera yara…… She thinks of Raj’s words. Sakshi asks Raj his choice. Raj smiles and helps her. He then turns and gets sad. Mannu finds Amba inside the shade and gets shocked. They get glad seeing each other. Mannu hugs Amba. Waaris…..plays…..

Amba says yes I remember, my children were always my strength, I did many sins in my life, when Devki knew her child has danger, she has separated the child, she did not let anything happen to her child, Krishna stayed happy and lived childhood by staying away from his mum, I have snatched your childhood. Mannu says no, he was Lord, I m a human.

Amba says its everyone’s perception, you also did difficult things, you are different, you lost but did not accept defeat, you stood up again, you have made everything fine, my daughter has done better work than a guy, I m proud of you, I know you will always be the same. The Heir 04 October 2019 Update – Zee World Series…

Mannu says I m glad to get a mum like you, who has always shown me the way, I got courage from you, I have to go, there is an incomplete work to complete, take care, tell me if there is any problem. Amba hugs her and smiles. Waaris…..plays…. Mannu leaves.

Rohan drinks. Simran covers her nose. He asks am I drinking anything bad. The goons come back. She goes to Rohan. The goons catch her. Simran says leave me, beat them, they are bad. The men laugh. Simran says he has power to beat. Rohan breaks the bottle and shows them. Simran runs to him. Rohan hurts the man. The goons run. Simran hugs Rohan. He makes her away and asks her to be quiet. They leave.

Mannu comes back home. Raj asks why did you come back, you went right. She says yes, you said with love to see your marriage and go, so I agreed. He says you have a big heart, you do my marriage preparations, see how I marry Sakshi. She says I want to see if you can marry anyone in front of me. He asks are you challenging me. She says I trust this heart, it will never cheat me.